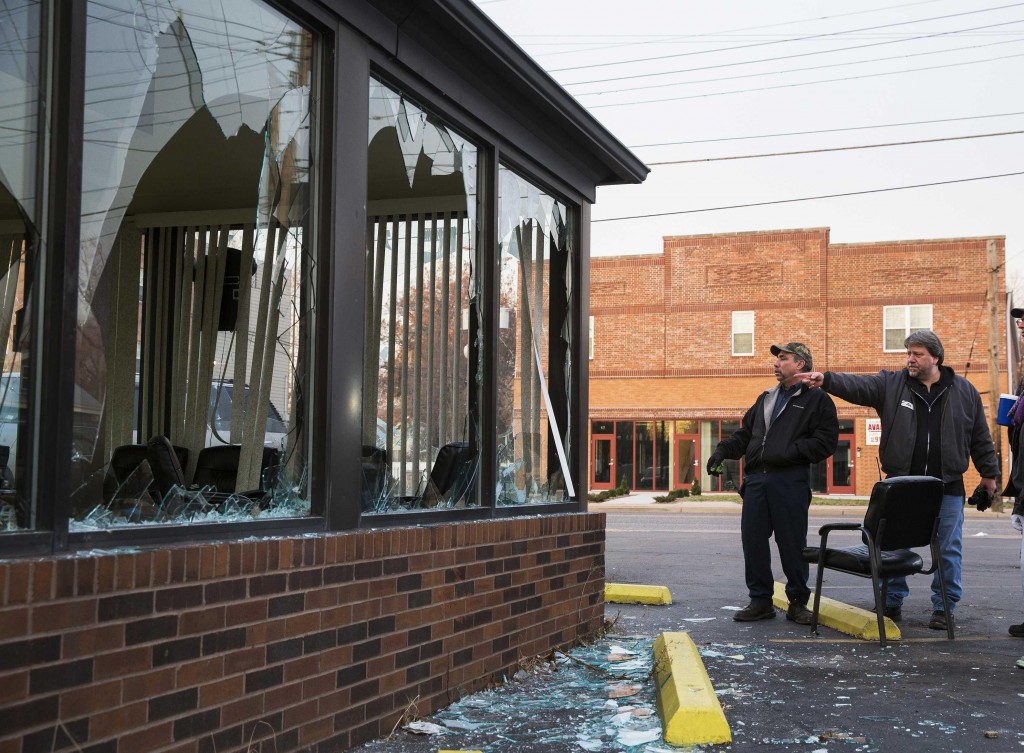 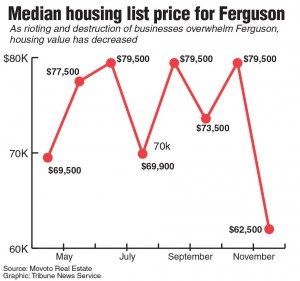 Ferguson business owners and residents spent Wednesday boarding up windows and clearing debris after two nights of unrest over the grand jury decision in the Michael Brown case, even as protesters continued to hold scattered demonstrations in the area.

Several protesters managed to rush into St. Louis City Hall screaming “Shame, shame,” leading police to lock down the building and call in more than a hundred extra officers. Police arrested three people, including one on an assault charge.

The demonstrators were among a group of about 200 that marched through downtown St. Louis and held a mock trial of Darren Wilson, the Ferguson police officer who shot and killed the unarmed Brown during an Aug. 9 struggle in that St. Louis suburb.

In Ferguson, meanwhile, many residents eager to get back a sense of normalcy were hoping to replace the nighttime chaos and unrest since Monday’s announcement of the grand jury decision with the relative calm the city has enjoyed during daylight hours. About a dozen people were painting over boarded-up windows on businesses in the suburb’s downtown on Wednesday, where National Guardsmen were stationed every few feet and some looked down from rooftops.

An influx of guardsmen helped make Tuesday night much calmer, although there were still 58 arrests at area protests and demonstrators in Ferguson set fire to a squad car and broke windows at City Hall.

There have been demonstrations in cities throughout the U.S. since the grand jury’s decision was announced. Most have been peaceful, with protesters rallying behind the refrain “hands up, don’t shoot.” But others haven’t been calm, including a demonstration in Oakland, California, in which protesters vandalized several businesses, one in Minneapolis in which a car struck a protester and drove into others. And in Portland, Oregon, police used pepper spray and made arrests after about 300 people disrupted bus and light rail traffic.

Wilson, 28, broke his long public silence on Tuesday, saying during an interview with ABC News that he has a clean conscience because “I know I did my job right.” Wilson, who had been on the Ferguson police force for less than three years before the shooting, said Brown’s shooting was the first time he had fired his gun on the job.

Asked whether the encounter would have unfolded the same way if Brown had been white, Wilson said yes.

Attorneys for the Brown family vowed to push for federal charges against Wilson — there is an ongoing civil rights investigation — and said they think the grand jury process was rigged from the start to clear Wilson. But federal investigations of police misconduct face a steep legal standard, requiring proof that an officer willfully violated a victim’s civil rights.

Testimony from Wilson that he felt threatened, and physical evidence almost certainly complicates any efforts to seek federal charges.

Attorney General Eric Holder said the department aims to complete those investigations as quickly as possible “to restore trust, to rebuild understanding and to foster cooperation between law enforcement and community members.”