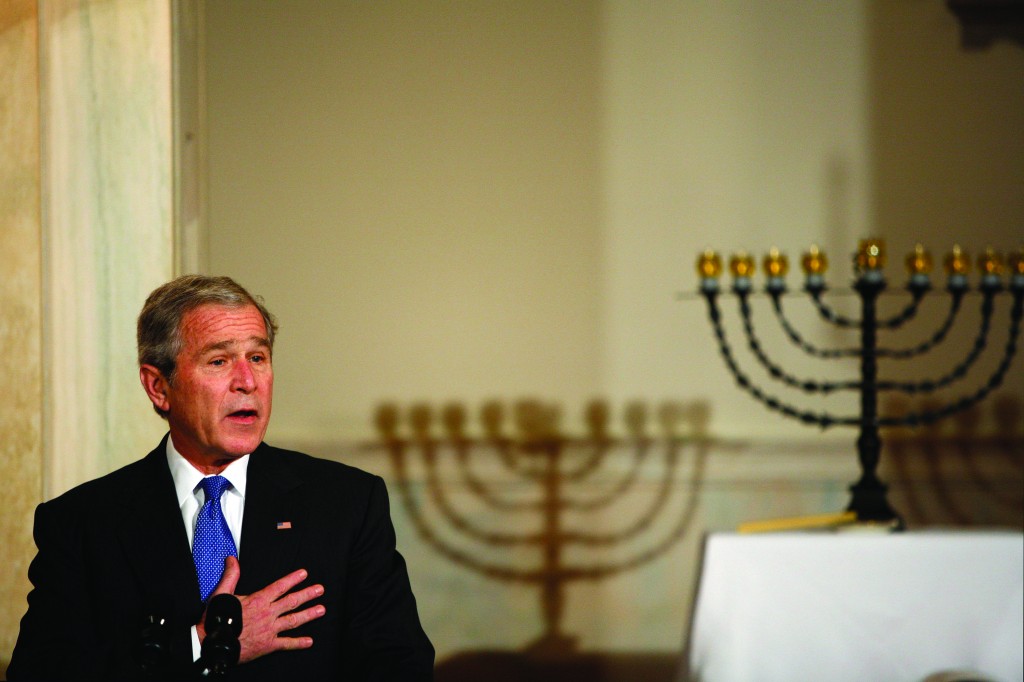 Should you ever find yourself in an ornate, high-ceilinged room with a military-uniformed classical string ensemble segueing from a flawless rendition of a Bach concerto to an equally impressive (if less inspiring) version of “I Have a Little Dreidel,” it can only mean one thing: you’re at a White House Chanukah party.

I know, because during the George W. Bush administration, on behalf of Agudath Israel, I attended several of the yearly gatherings, which brought together assorted Jewish personalities, politicians and organizational representatives. One of the times when my wife didn’t accompany me, a major supporter of Agudath Israel was my guest.

I discovered then (aside from the fact that nothing compares to home-made potato latkes) that Mr. Bush is a mentch.

As we stood in the long line for the ritual photo-op with the president and first lady, my guest asked me if I minded if he alone stood next to the first couple for the photo. Having already garnered the souvenir before (along with a presidential seal paper hand-towel from the White House restroom, now hanging on our own bathroom wall), I didn’t. And so, when it was our turn, I stepped back to allow my guest to pose unaccompanied with the First Couple. Mr. Bush motioned to me with a broad smile to join the photo. I explained that I wanted my guest alone to be in the picture.

The president allowed the photographer to snap the photo but then, breaking assembly line photo op etiquette, insisted that a second photo be taken with me in it. “Why shouldn’t you get a turn?” Mr. Bush asked. I was a little embarrassed but, of course, heeded the Commander-in-Chief’s order.

Mr. Bush’s mentchlichkeit has been on more public display many times, most recently, during a Fox News interview. The interviewer reminded Mr. Bush of his 2007 warning that withdrawing U.S. troops from Iraq could be disastrous, and asked if he had criticism of President Obama for doing precisely that two years later.

“I’m not going to second-guess our president,” Mr. Bush said. “I understand how tough the job is. And to have a former president, you know, bloviating and second-guessing is, I don’t think, good for the presidency or the country.”

Mr. Bush wasn’t just being perfunctorily polite. Having “been there,” he knows that there are factors that go into a presidential decision to which the citizenry is blissfully oblivious — and that, in the end good outcomes can only be hoped for, not prophesied.

A decision Mr. Bush made during his tenure was to authorize the secret creation of the Stuxnet computer virus, designed to infect and wreak havoc on Iran’s main nuclear enrichment facilities. When Mr. Bush left office, President Obama accelerated the clandestine program, ordering increasingly sophisticated attacks on the computer systems at the Natanz plant.

In 2010, the plant was hit by a new version of the worm, widely regarded as having been designed by American and Israeli cyber experts working together, and then another one after that. Nearly 1,000 Iranian uranium-purifying centrifuges were disabled. The virus continued to hamper other Iranian facilities through the end of 2012.

During that same period, many media were brimming with indignation over Mr. Obama’s not having yet visited Israel as president; trumpeting charges that cooperation between Israel and the U.S. was at its lowest point in decades; bubbling with outrage over Mr. Obama’s opposition to Israeli construction in Yehudah and Shomron; and castigating the president for mentioning Israel’s 1967 borders as a starting point (“with mutually agreed swaps, so that secure and recognized borders are established …”) for Israeli-Palestinian negotiations.

And yet, behind the scenes, unknown and unsuspected by all the righteously irate, Mr. Obama was pursuing a joint program with Israel to undermine the Iranian threat to her security.

Ex-President Bush is both wise enough and modest enough to know that even those who once sat in the Oval Office are not privy to all that’s happening at 1600 Pennsylvania Avenue.  Kal vachomer, the rest of us.

Predictably, though, in anticipation of news about a nuclear development deal with Iran, or of an extension of negotiations (this is being written before the deal-deadline), the usual suspects are cleaning their BB guns, ready to take their potshots at the president. But the wiser among us do well to remind ourselves that we don’t know all there is to know, to not “bloviate and second-guess” the current president. We could learn a little wisdom and humility from the 43rd.