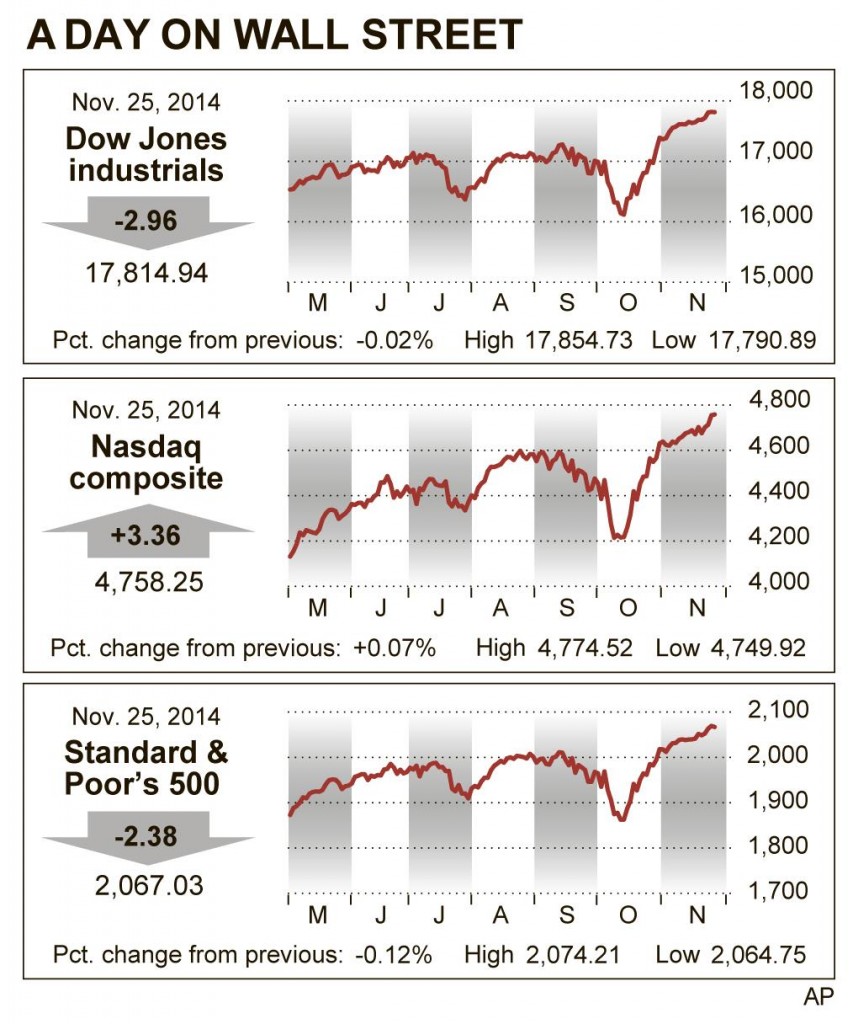 A slump in energy prices pushed the stock market back from record levels on Tuesday.

Energy stocks slid as the price of oil resumed its descent. Traders speculated that member nations of the oil-producing group OPEC would fail to agree on production cuts at an upcoming meeting in Vienna on Thursday. Oil has now dropped almost a third from a peak in June.

While lower oil prices are a long-term boon to consumers and industrial companies, they are a drag on stocks in the near term because the energy sector accounts for about 10 percent of the stock market’s overall earnings.

Despite the losses, the major indexes remain close to all-time highs.

Stocks have been drifting gradually higher this month, having rebounded sharply from a slump in October, as investors have grown more confident that actions from central banks around the world will help bolster the global economy. The gains are likely to continue for now, said Jim McDonald, chief investment strategist at Northern Trust.

“People’s sentiment is still pretty conservative,” McDonald said. “That means that the slow-and-steady market can continue longer than people anticipate.”

Stocks started the day with small gains after a report showed that the U.S. economy grew at a solid 3.9 percent annual rate in the July-September period, faster than the 3.5 percent that was initially reported. The upward revision was due to higher estimates of spending by consumers and businesses, the Commerce Department said.

That positive report was tempered by news that U.S. consumer confidence fell in November. The Conference Board says its consumer confidence index fell to 88.7, down from a seven-year high of 94.5 in October. The decline primarily reflected less optimism in the short-term outlook as consumers expressed less confidence in current business conditions.

Among individual stocks, Pall, a company that makes filters for the food and health care industries, was the leading gainer in the S&P 500. The company’s stock jumped $3.31, or 3.5 percent, to $98 after its earnings beat the expectations of Wall Street analysts.

Energy stocks slid along with oil prices following reports that the world’s biggest producers are unwilling to cut production to help stop a slump in the price of crude. The sector dropped 1.6 percent and is now down 3.2 percent for the year. It’s the only one of the 10 industry sectors in the S&P 500 that is down for the year.

Oil started the day higher, but slid on reports that representatives from Venezuela, Saudi Arabia, Mexico and Russian state oil giant OAO Rosneft had failed on Tuesday to agree on any immediate plans to cut output. The oil producing nations were meeting ahead of OPEC’s Thursday meeting.

While falling energy prices will help put more money in consumer’s pockets ahead of the end of year spending season, a longer slump in prices might start to impact hiring in the U.S. energy industry, said Jim Russell, a portfolio manager at Bahl & Gaynor, a wealth management firm.

“There is probably a sweet spot where the energy sector wins and the consumer wins as well and that’s probably right in here,” said Russell.