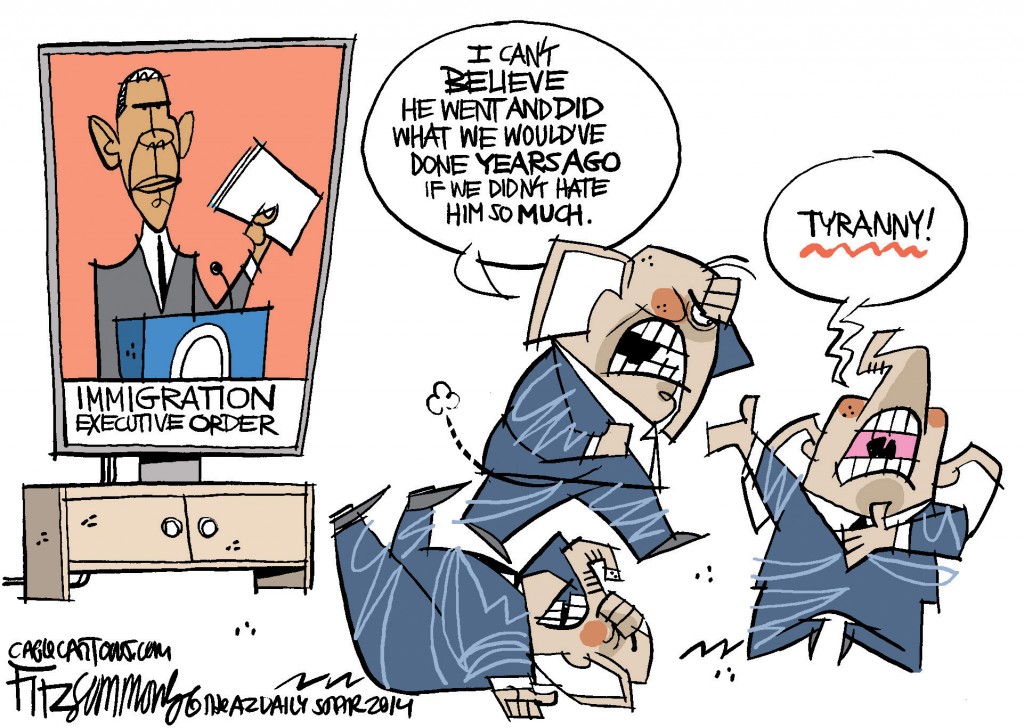 There are viewpoints expressed by some of my colleagues that I may disagree with, but I can at least fully understand where they are coming from.

For instance, I see Obamacare as a mixed bag, a well-intended but deeply flawed law that has been a great help to some in our community but is deeply unpopular with so many others. Some of my colleagues seem to consider it a disaster of epic proportions.

The same applies to the fact that many in our community are extremely upset about Obama’s policies on Israel. While I have argued that their positions are exaggerated and that he isn’t worse than numerous previous presidents, I can certainly understand why they feel that way.

What is, however, simply incomprehensible me is how a Torah-observant Jew can be anti-immigration.

On Wednesday night, shortly after I read the transcript of President Obama’s speech on immigration that was emailed to me (and to all the thousands of others on the Press list) by the White House, I encountered an acquaintance, a very intelligent fellow whom I genuinely respect.

He made no secret of his dismay about the president’s decision to use executive orders to spare from deportation nearly five million people currently in the U.S. illegally.

I made no secret of my bafflement at his reaction, pointing out that the same arguments that are now being used against immigrants from Latin American countries were used against Jews for generations. Perhaps more than any other people in the world, we know the bitter feeling of having the gates of foreign lands slammed in our faces.

It was stiff U.S. anti-immigration laws that prevented European Jews from being able to flee the Nazis. Those laws weren’t created specifically to keep Jews out, and the laws were passed some 15 years before WWII broke out. The intent was to “keep America, American.”

Yet this argument itself is the ultimate hypocrisy. Other than the American Indians (nowadays more accurately referred to as Native Americans), who were probably the first people to settle in America, all Americans are “immigrants.”

While the Latinos who have flocked to these shores aren’t in danger of extermination, they came here for the same reason that so many other Americans did — including some two million Jews between 1880 and 1920 — to escape poverty and seek a better life for themselves and their children. Why should Latinos have any less right to settle in America than the Irish, Italians, British, Dutch or Spanish?

“But they are illegal!” my acquaintance gasped.

“Last time I checked, the people on the Mayflower didn’t get a visa from the Indians, either,” I countered.

Many of the Jews who managed to escape to America during and immediately after WWII came here on student visas that eventually expired. Some later faced deportation, and the legendary Vaad Hatzolah askan Irving Bunim and his associates had to fight hard to convince the authorities not to send them back to Europe.

The reason so many Latinos are here illegally isn’t because they want to break the law; it is for the same reason so many of our ancestors smuggled across various borders: Unfair and restrictive U.S. policies don’t give them a choice.

Deporting all illegal aliens would be devastating to millions of decent men, women and children. But it would be far more devastating to the American economy. These immigrants take jobs that desperately need to be filled but no one else wants.

Let’s be honest: How many New Yorkers actually ask to see the green card of the housekeeper who comes to clean their homes once a week? The same law that makes them illegal, makes hiring them also illegal. Somehow, many of the very same individuals who are so outraged about their being here have no compunctions about using their services.

Some have argued that President Obama’s use of executive orders for this purpose is illegal. Many in Congress are upset that he is usurping what they consider to be their powers.

In reality, Obama is simply doing what Presidents Reagan and Bush did. Granted, he is going much further and his order will affect many more immigrants, but from a legal perspective it is hard to see why that makes a difference. The Constitution grants the president unlimited powers of pardon, and so it is difficult to understand why he shouldn’t have the authority to stop the inhumane deportations of many hardworking, peaceful individuals.

Ultimately, it will be up to the U.S. Supreme Court to decide whether Obama has overstepped his bounds. But either way, Torah Jews should be praising this decision.

The Torah instructs us to be careful not to hurt a ger because we were strangers in Egypt. We know all about being immigrants, legal and otherwise. Let us treat the Latinos the way we would have wanted to be treated.