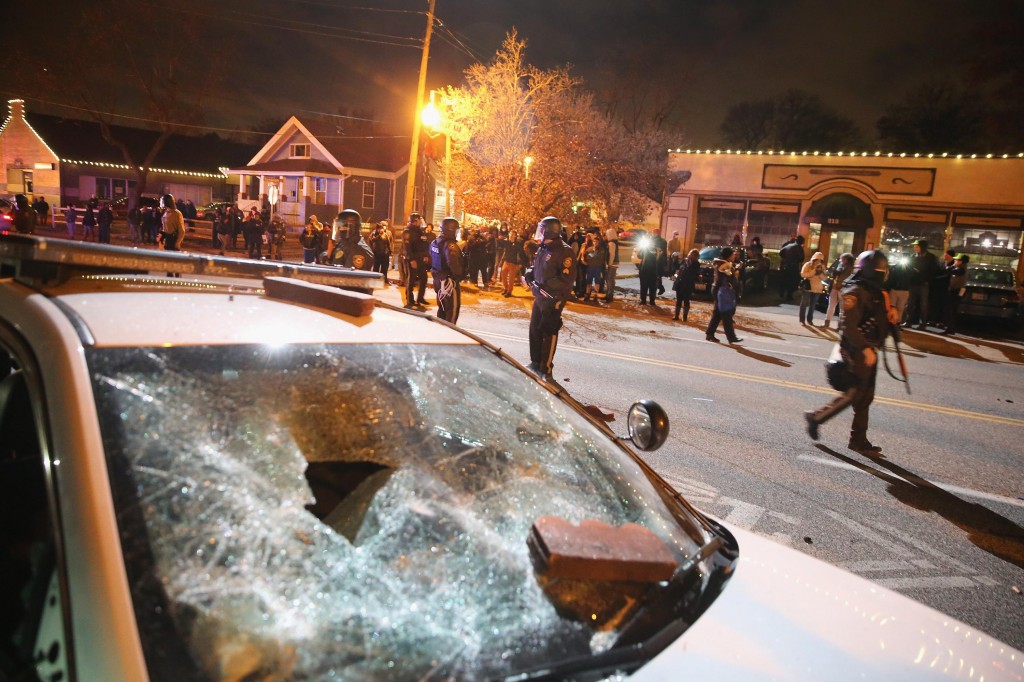 “Protests won civil rights. Riots set them back,” wrote the Politico columnist on Monday, as police in Ferguson prepared for the grand jury decision to be announced.

Purdum couldn’t have known (or, very likely, could have) that within hours, hundreds of cars would torched by flag-burning rioters, several police officers were injured, one person may have been killed, and dozens of stores — the life’s dream of their owners — would go up in flames and bring the hitherto unknown city of 20,000 down in infamy.

Watching the preparations on Monday for the grand jury decision was like witnessing a train wreck in slow motion. You could yell, wave your arms, appeal to reason and its grandmother, yet the train comes inexorably closer to the victim.

City residents, even black city residents, boarded up their stores in advance. A picture that stands out is a Ferguson barber, an African-American gentleman, on Tuesday surveying the damage done by rioters to his shop. Glass shards litter the ground and the interior has been gutted by flames.

Is this justice in 2014? Did not President Obama just this week call on Israel not to impose collective punishment on its Arab citizens? Are not these rioters doing the same, collectively punishing an entire city — at last count, there were protests in 115 cities? Why do protests defined by the media as “peaceful” come along with police advisories to “keep your doors locked”?

An analysis of the grand jury documents show that Darren Wilson, the shooting officer who the media never fails to mention is “white,” had a consistent story throughout the proceedings. He was cowering in his police cruiser as the 6-foot-5, 250-pound Michael Brown, fresh off a strong armed robbery at a convenience store, punched him twice.

Anything less than a full acquittal would have been a travesty of justice.

Wilson should, as Rep. Peter King suggested, be invited to the White House by Obama to prove his innocence and the nation’s adherence to the rule of law. Let them have a beer summit. And invite Brown’s parents as well. Such an invitation would go farther to better the country than all the dozens of White House visits by Al Sharpton.

Wilson should become a model to the axiom that second guessing policemen leads to greater civil rights violations, not less.

If civil rights is more important that safety, as some are saying, would it not have been worth it to just convict the white officer, maybe even give him the death penalty, just to quiet these mobs?

Delivering the grand jury’s decision, the prosecutor “never mentioned that Brown was unarmed when he was killed,” The Associated Press without irony noted in its coverage.

How could he? We never failed to mention that crucial fact, how could the prosecutor not follow us? Never mind that he was armed; he had turned Wilson’s gun on him before the cop wrested it back.

While the civil rights movement has been good to its leaders, such as Al Sharpton and Jesse Jackson, leadership has gone AWOL in this instance.

The work of Martin Luther King Jr., the election of Barack Obama as the nation’s first black president, the freedom riders of Alabama, the marches in Selma and Birmingham — they are all undermined by the riots and the looting.

How does looting help Mike Brown’s memory or his void to his parents? How do images of smiling teens carrying off VCRs, leather jackets and liquor help the civil rights cause? How does the smashing in of a bakery owned by a single mother of two small children, or the smashing in of an auto repair shop, help anyone, even the looters themselves for that matter?

The African-American community has many needs — as do all ethnic and minority groups in the country. These riots scare off governments from investing in them.

As Purdum said, protests won civil rights, riots set them back. We have yet to see the protests here.