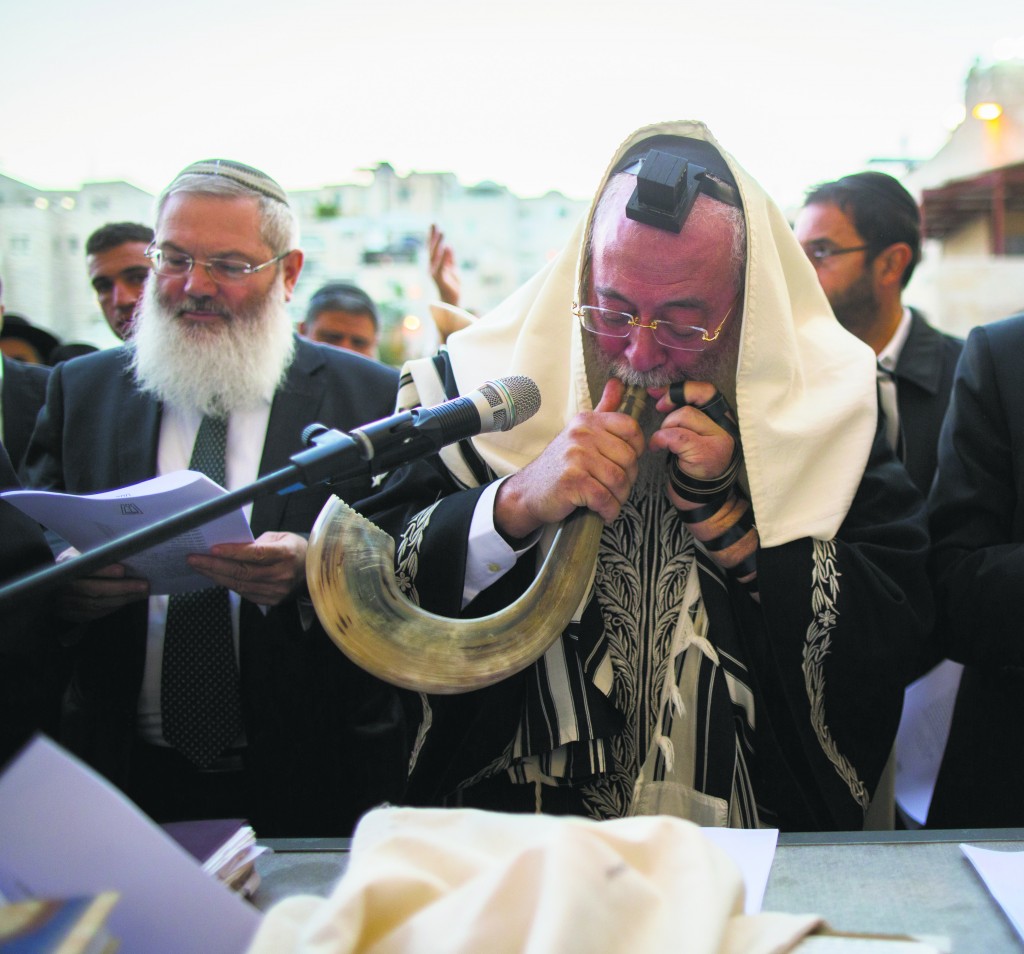 There are no words to describe the events that transpired in the Bnei Torah shul in Har Nof last Tuesday morning. Massacre? Murder? Pogrom? They all fall short. They don’t convey the moment of horror, when pure Jewish men and their sons, in their tallis and tefillin, answering amen to the repetition of Shemoneh Esrei, were attacked by descendants of Yishmael bearing cleavers and guns.

There are no instruments to measure the tears that have been shed since last Tuesday — all over the world — for the Kedoshim, their widows, their orphans and, in some cases, their bereaved parents; for the wounded, some in very serious condition, for their families facing uncertain futures.

And there is no way for us to understand how it can be that the most contemptible, lowly creatures on earth could enter a beis medrash and fell talmidei chachamim, men who represent the pinnacle of mankind. We can’t grasp the juxtaposition of tumah and taharah, light and darkness, goodness and evil in a mikdash me’at.

We can’t fathom Hashem’s ways, and that leaves us unsettled, confused, even angry.

But just as the source of the agony felt by Jews around the world this week was Har Nof, so too are the words of comfort and chizuk. Hagaon Harav Moshe Shternbuch, shlita, addressing a gathering last Thursday night at the Gra shul, conceded that it’s difficult to understand the ways of Hashem. “Ki lo machshevosai machshevoseichem…”

However it is clear that Hakadosh Baruch Hu wanted to shake us up, to force us to do a cheshbon hanefesh. “If we attribute these tzaros to happenstance, and don’t awaken to do teshuvah, then the anger of Hashem will increase and we will need to offer more sacrifices, chas v’shalom,” he said.

Harav Yitzchak Mordechai Rubin, shlita,  the Rav of Bnei Torah, stressed the importance of recognizing that even in the din there was chessed. He pointed out in his drashah Shabbos night that many had escaped that beis medrash unharmed and many others who would normally have been there, for some reason weren’t. Harav Rubin himself regularly arrives at the entrance to the building at the time the terrorists entered, but that morning wasn’t feeling well and came a few minutes late.

He shared a phone call he received before Shabbos from a Rav in the neighborhood offering words of consolation. The Rav related that he had been approached by a Jew having a bit of a crisis of faith, wondering how such an act, involving people in tallis and tefillin, could have taken place in shul, during davening. The Rav began his response by saying that in order to answer conclusively he would have to have received permission from Hakadosh Baruch Hu, and since this wasn’t yet the case, he couldn’t answer in His name.

However, the Rav continued, if the four had been killed in an accident on the light rail, would that be understandable? Yes, responded the skeptic. It would have meant their time had come to leave this world.

Ah, concluded the Rav, if so, I can answer your original question. Why is it so difficult for you to understand that their time had come, and instead of dying in a light-rail accident, Hakadosh Baruch Hu chose them, because of their righteousness, to die al Kiddush Hashem, wrapped in tallis and tefillin, in a shul, during Shemoneh Esrei.

Harav Rubin related that he congratulated the Rav for anticipating the words of Hagaon Harav Chaim Kanievsky, shlita, who sent that very message to the grieving families. He said that since their time had come, Hakadosh Baruch Hu arranged that it should happen in a way of kedushah and taharah.

Where do we go from here? We each have to do our cheshbon hanefesh, in the knowledge that we are one, and that what we do in New York, Los Angeles or Melbourne has an impact on what happens in Yerushalayim.

What is certain is that life can’t continue as it was before last Tuesday morning at 7 a.m. “Sometimes there is a tragedy and we need chizuk. But in our situation we need change,” said Harav Rubin. “Sometimes a person can have a heart condition and undergo an angioplasty, which improves the functioning of the heart. But there are situations when you need to replace the heart. Today we need a ‘new heart,’ we need to change, to be different in every way.”

Perhaps our new heart can be one that doesn’t forget so quickly, one that has the capacity to hold on to feelings of concern for the families beyond the week of shivah, or even the month of sheloshim. One that understands that the widows don’t need us during the shivah, when their homes are filled with menachamim; they need us in a month, in a year, when they are raising children on their own, without a husband, without a breadwinner.

The Jews of Toronto have established a fund to help the family of Canadian-born Chaim Rothman (Chaim Yechiel ben Malka), a father of 10, who was very severely wounded. It is an initiative that should be emulated.

A fund has been set up by the Kupat Ha’ir. Those interested in contributing to the families can call (in Israel) (03) 671-6900 or email office@kupat.org and specify that the contribution is for the fund of Kedoshei Hatevach in Har Nof, No. 2159.