Community The Need to Fear
Community 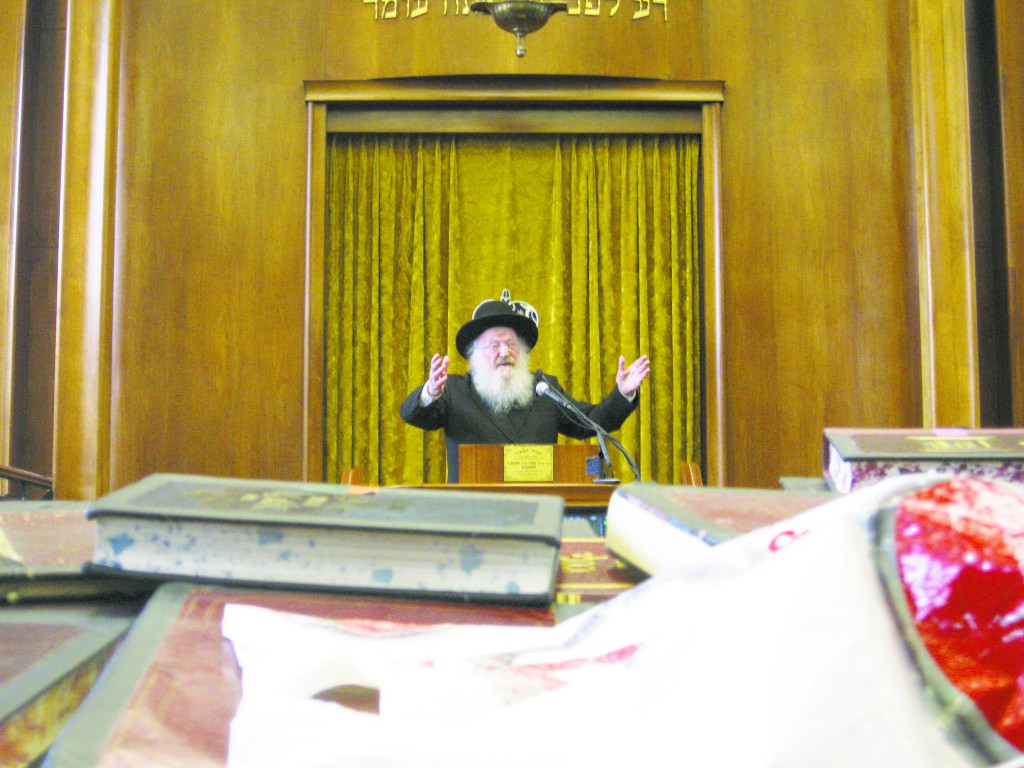 “Hashem, I heard what you made me hear, and I was frightened.”

When a person has an unsettling dream and wakes up feeling sad, feeling that he should make hatavas chalom, he begins with this verse from the Navi Chabakuk. When Hashem shakes the heart of a person, the desired response is for that person to say; “Hashem, I hear what you have said to me, and I am scared,” that is, I have used this event as an admonition to gain yiras Shamayim.

How much more so, when a person experiences a shocking event while awake, in real life, must he realize the purpose of his going through this experience. He must say, “Hashem, I heard Your words and I got the message.” He must gain yiras Shamayim. That is what Hashem asks of each of us, and nothing else.

The passuk says in Koheles, “I realized that whatever Hashem does will endure forever. Nothing can be added to it and nothing can be subtracted from it, and Hashem has acted so that man should stand in awe of Him.” The Targum on this verse says that Shlomo Hamelech was shown through prophecy that all Hashem does in the world, whether good or bad, cannot be altered, and only occurs in order that we might fear Him.

What does yiras Shamayim mean and what does one do when he has it?

Reb Simchah Zissel of Kelm, zt”l, once said that people make a fundamental mistake about what defines a “brave warrior.” When they see someone fighting courageously, they think that this soldier is fearless, but that is not what makes him brave. One who lives without fear is not able to fight at all; he simply goes to sleep and does nothing at all. The good warrior’s fear is so strong that it moves him to fight with all his strength.

Fear should not bring one to despair or a sense of loss. It should move one to action.

The difference between the brave man and the weak-hearted one is simply that the latter’s fear causes him to run away, whereas the brave man’s fear is the source of his motivation.

“That man should stand in awe of Him,” as the passuk said; when Hashem brings misfortunes to the world He wants people to seek to increase their yiras Shamayim.

The Gemara says in Maseches Brachos that “on good tidings one makes a blessing of ‘hatov v’hameitiv,’ and on bad tidings, ‘baruch Dayan ha’emes.’” That is what it means to react out of yiras Shamayim!

We have to know the practical halachah of this Gemara as well. I do not know how many people made a brachah “baruch Dayan ha’emes,” but on hearing such news certainly one should. One must admit, “Hashem, I know that you are the ultimate good and that you seek to do only good, but I do not see it now, and so I say baruch Dayan ha’emes.” Chazal tell us that this world is not like the next world, in which we will be able to recognize the good in all of Hashem’s ways; as such, there we will only need one such brachah. However, now, the reaction of one with yiras Shamayim today is “Dayan ha’emes,” that Hashem is the world’s true Judge.

It is interesting that both in Shas and Shulchan Aruch the phrase that is used to describe what obligates one in these brachos is “tidings,” news that one hears, and not “events.” What does it have to do with hearing the news, isn’t the event itself the point?

The answer is that Hashem does not only make an event, He makes a reckoning of every person who will hear this news and how he reacts to it, as the passuk says, “…in order that they should stand in awe of Him.” That is the purpose of the event itself, that each individual, no matter how far away he is, should gain yiras Shamayim.

The goal of a world-shaking event is that every individual who hears about it should gain yiras Shamayim.

In a situation like this, one feels the galus a great deal more. One of the main losses of galus is that we have no Neviim. We have no one to tell us what Hashem wants when He does such a thing. We feel lost.

But, the Neviim that we did have, baruch Hashem, taught us how we should approach making an honest cheshbon hanefesh and how yiras Shamayim should guide our thoughts and actions.

Harav Avraham Grodzinski, zt”l, in his sefer Toras Avraham observes that many times when the Neviim sought to explain why Hashem did certain things, they did not point to bad deeds, but to good deeds that were perhaps not as good as we assumed they were.

For example, the Navi Yeshayahu brought many korbanos, and Hashem asked him, “What do I have from all of your offerings?” Possibly they were blemished or stolen, but the bottom line was that Hashem was not pleased with them.

The Neviim pointed out that frumkeiten that Klal Yisrael kept did not have any power. They kept Shabbos and Yom Tov and yet the Navi said that Hashem was not pleased with them.

Only a Navi can show a person where he has deceived himself, but we must learn from what they have said how every person should react. One must be able to criticize one’s own self and ask, “Maybe my learning is not learning, maybe my davening is not davening?”

The Chofetz Chaim writes that, with one word of lashon hara, it is possible to block the positive effects of all of one’s Torah and mitzvos. To live with the awareness of the extent of the effects of one’s actions is what it meant to live with yirah.

He mentions a Midrash Shocher Tov saying that “Hashem is angered by the voice of one who speaks lashon hara, and a person can lose the little Torah that he has.” One must believe the words of such a statement by Chazal, and be frightened by them.

To think that it is possible for one to lose all of one’s Torah with a word of lashon hara!

The Chofetz Chaim continues with a Zohar that the tefillos of one who speaks lashon hara are not accepted because of the impurity that he has brought upon himself, but that, with teshuvah, he can regain what he has lost. Be afraid of what your actions can do, but do not despair. That very fear should lead one to teshuvhah with which he can reclaim the power of his Torah and tefillah.

The Chofetz Chaim, in a discussion of Krias Shema, asks why, in the parashah of tzitzis, does the Torah twice warn us to “remember” the mitzvos? He answers that every mitzvah sanctifies the person who performs it, as we say in birchas hamitzvos, “Who sanctified us with His commandments.”

If so, a person should really feel a kedushah and a sense of elevation from the physical world, after every mitzvah that he does. One should not be plagued by so many inclinations taking him away from ruchniyus.

However, says the Chofetz Chaim, if one does not obey the Torah’s warning of “lo sasuru — not to follow your heart and  your eyes, after which you stray,” then the mitzvos cannot bring their kedushah upon him. Included in lo sasuru, say Chazal, is any thought that is in opposition to the Torah and all unnecessary pursuit of worldly pleasures.

The extra warning to “remember” connects these two concepts.

The Chofetz Chaim compares this phenomenon to a filthy house. One can bring in scores of gold and silver objects, but none of them will be able to beautify the home. The filth, itself, must first be removed. So too, the kedushah of mitzvos cannot be sensed by one who entertains heretical philosophies or is wallowing in the pleasures of the physical world.

“Hashem, I heard what You made me hear, and I was frightened.”

The pasuk asks with surprise; “Kohen and Navi have been killed in the House of Hashem?” None of the suffering of galus approaches the murder of kohen v’navi in mikdash Hashem. It is a wonder that such a thing should befall Jews of such spiritual stature in a place of such holiness. The source of this emotion is not that the sense of mourning is greater, but that it raises the question, “What does Hashem want from such a tragedy?” What could Hashem want, that Kedoshim, crowned with tallis and tefillin, should be murdered in a beis medrash?

One thing that Hashem wants is to shake us, and infuse us with yiras Shamayim, so that each one of us will undertake to live with yiras Shamayim. The prelude to that is to have a palpable sense of fear of Hashem. Nothing is certain in this world. All we can do is seek to live the life and do the actions that afford us Divine protection.

We daven and hope for Moshiach. It is very possible that this event is included in what Chazal call chevlei Moshiach — the birth pangs of Moshiach — which Rashi says means that we will be “frightened and shaken by the nations of the world.” That is the purpose of these trials — that we should gain yirah — fear of Hashem!

Geulah, Redemption, is the seventh brachah in the Shemoneh Esrei. Chazal say that Geulah should come during a year of Shemittah. On this point, the Gemara raises a seeming contradiction from that fact that Shemittos often coincide with times of wars, but answers that Redemption will come in times of war.

Still, the plural, the word “wars,” points to more than one war. We have seen a lot of wars … a war in Gaza, a war on the streets of Yerushalayim, and more. Hashem should help turn this into a good sign for us.

Baruch Hashem, the yeshivah is full of Torah. We went through an Elul and a Yamim Nora’im together, and then the yeshivah’s seder mussar was very strong.

However, by now, it has weakened considerably.

One of the things that Harav Yisrael Salanter taught us is that it is impossible to do teshuvah without studying mussar, which teaches us what to do and how to conduct ourselves.

The study of Torah must be together with yiras Shamayim!

To strengthen one’s schedule in studying mussar is a simple thing to take away from these events. It is in itself a strengthening of yiras Shamayim and a fulfillment of the passuk, “Hashem, I heard what You made me hear, and I was frightened.”

This is the reaction of the brave soldier who is reacting to his fear with action. His reaction is to say, “I am trying to go higher and higher in avodas Hashem. I want my Torah and mitzvos to have the shleimus of being together with yiras Shamayim.”

We have no Neviim, but we have a clear approach. Hashem has called to us, now, and every individual must listen to what Hashem is asking of him. In the most general sense, this is a reaction of yiras Shamayim.

Every ben Torah must seek to find what Hashem wants of him. One must know and feel that Moshiach is coming and that there is such a thing as chevlei Moshiach and that the way to be protected in this time is to totally involve oneself in Torah, avodah, and gemilus chassadim — totally involved in avodas Hashem!

“Hashem, I heard what you made me hear, and I was frightened.”