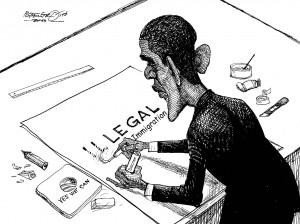 President Obama’s decision to use an executive action to effectively grant amnesty to an additional 5 million illegal immigrants set off waves of condemnation from Republican politicians. Incoming Senate Majority Leader Mitch McConnell warned that “If President Obama acts in defiance of the people and imposes his will on the country, Congress will act,” and House Speaker John Boehner said that the move was “damaging the presidency.”

A number of Democratic senators even agree with the sentiment, criticizing the president for the executive action.

Claire McCaskill (D-Missouri) said executive orders “aren’t the way to do it,” and Joe Donnelly (D-Indiana) said that “the president shouldn’t make such significant policy changes on his own.” North Dakota Democrat Heidi Heitkamp said that the president’s move “could poison any hope of compromise or bipartisanship in the new Senate before it has even started,” while Maine’s Senator Angus King (who caucuses with Democrats) said that he has “constitutional concerns about where prosecutorial discretion ends and unconstitutional executive authority begins.” Joe Manchin (D-WV) and Jon Tester (D-Montana) expressed disapproval with it as well.

But this should come as no shock to anyone. The president has proven time and time again that he has no regard for the rule of law and/or the legislative process if that process will not yield the exact result he is looking for.

Nobody has been a stronger (and unlikelier) critic of President Obama on this issue than self-described liberal law professor and lawyer Jonathan Turley. Turley called this latest move “dangerous” and told Fox News, “I always tell my friends on the Democratic side, we will rue the day when we helped create this uber-presidency.”

Professor Turley, who had been best known previously for having called for criminal persecutions of Bush administration officials for war crimes, most recently made news when he signed on to represent the House Republicans in their lawsuit against the president. That lawsuit is in response to the unilateral actions the president took in not implementing various parts of the Affordable Care Act (ACA).

Recent revelations about the ACA, more popularly known as Obamacare, are a sign of a more serious underlying problem that this administration has when trying to implement its agenda. The “Gruber videos” reveal Obamacare architect Jonathan Gruber (the man the president said as early as 2006 that he had “stolen ideas from”) talking about the fact that they were able to pass Obamacare due to “the stupidity of the American voter” and the “lack of transparency” in passing the bill. This was followed by HHS (Department of Health and Human Services) admitting (after they were caught) that they counted almost 400,000 dental plans in the number of Americans who had signed up for insurance using the Obamacare exchanges. That brought the much ballyhooed signup number of 8 million, which surpassed the 7 million CBO benchmark for viability by a million, down, after several revisions, to around 6.7 million — 300,000 people short of the goal.

Then came the news that HHS has the rules set up so that if an Obamacare enrollee takes no action during open enrollment, the plan would automatically renew. HHS said that they’re looking to change this rule to enroll these customers into a lower-cost plan. So not only is HHS saying that they will automatically re-enroll you, they will soon choose your plan as well.

I know many people feel, as President Obama undoubtedly does, that the amount of good the health-care law does far outweighs the litany of negatives associated with its passing, implementation, and administration. I disagree with that, but to make a broader point, I’ll look away from it for a bit. The greater issue here is that nobody, not the president, not the HHS secretary, and not Congress, has the authority, or even the right, to do what this administration is doing.

In 1939, Harav Moshe Feinstein, zt”l, pointed out that the uniqueness of the American government is that, unlike other countries throughout history, the American government exists for one purpose only: that is, to protect the rights of every individual so that s/he isn’t taken advantage of by another. That, said Harav Moshe, is the only legitimate function of a government. Government itself is nothing more than a way of referring to the country as a whole (think of the people, by the people, for the people), and as such, said Harav Moshe, can’t overcome limitations that individuals can’t overcome simply because it is the government.

Using subterfuge to pass a law is an illegitimate function of government. Skirting around the will of the people, as was evidenced by the results of the midterm election and governing by fiat, is not within the lawful functions of the office of the presidency. It isn’t a question of whether or not the action taken is, in its totality, a net positive; although it helps those who take the action feel like they are then shriven of the illegality of their actions. It’s that they just have no right to do it at all.

This article appeared in print in the November 26th, 2014 edition of Hamodia.