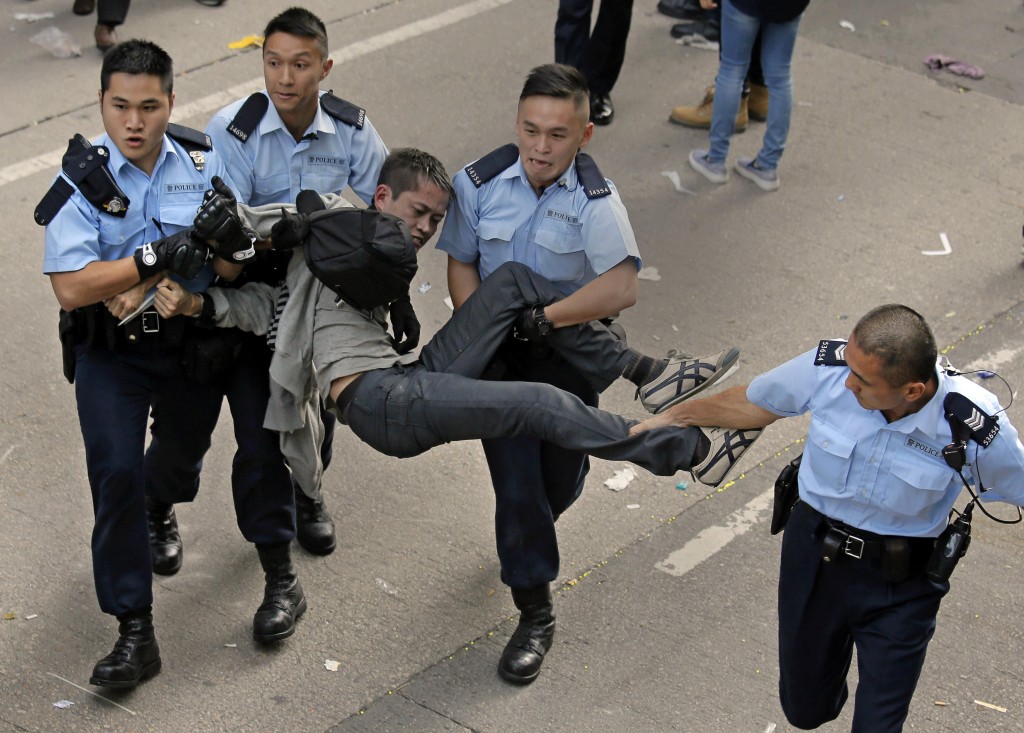 An attempt by Hong Kong authorities to clear a two-month-old pro-democracy protest camp in Mong Kok district spiraled into chaos Tuesday as hundreds more protesters flooded the crowded neighborhood, a flashpoint for earlier violent clashes with police and angry mobs.

A total of 80 people were arrested, police said.

Twenty-three were detained for contempt of court or resisting public officers after police warned them not to interfere with workers and bailiffs enforcing a court order to remove obstructions from part of the protest area, one of three sites in the city occupied by activists.

Workers in hard hats and gloves backed by bailiffs and police had spent most of the day clearing barricades, tents and other debris from the 50-meter (160-foot) stretch of Argyle Street covered by the court order, which was granted to a minibus company complaining that its business was hurt.

Pro-democracy lawmaker Leung Kwok-hung was among those taken to waiting police vans. By evening, traffic was flowing again on the street for the first time in two months, but tensions rose as protesters scuffled on surrounding side streets with police, who used pepper spray to force them away from the area. Fifty-seven more people were arrested for unlawful assembly and assaulting or obstructing officers, a police statement said.

The chaotic scenes that continued late into the night underscored the challenge Hong Kong authorities face in trying to shut down the protest site in gritty, working-class Mong Kok. It’s home to a more unruly and aggressive crowd compared with the main protest site next to government headquarters, where protesters last week put up little resistance to a separate court order to remove a handful of barricades.

The government warned that on Wednesday police would help enforce a second restraining order granted to taxi drivers covering the rest of the Mong Kok site, raising the prospect of further violent clashes.

“Tomorrow will be the main event,” said lawmaker Albert Chan of the radical pro-democracy People Power party. “There will be more people joining the resistance.”