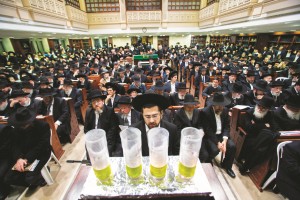 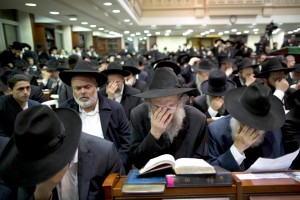 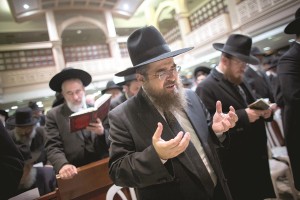 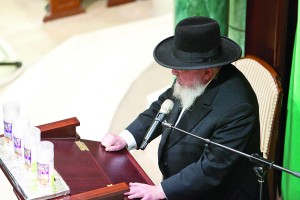 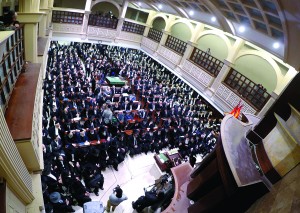 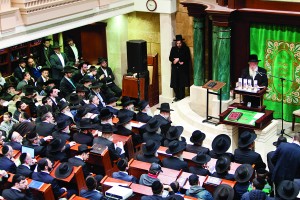 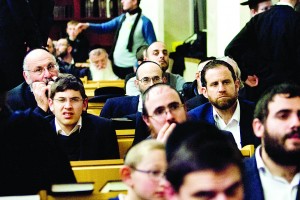 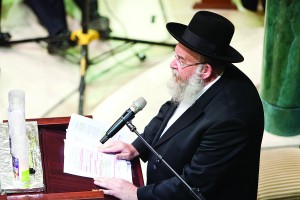 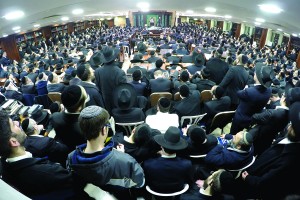 A solemn gathering attended by thousands was held to mark the end of shivah at the Kehillas Bnei Torah shul in Har Nof where four congregants and a police officer were murdered by terrorists in one of the most horrifying attacks in recent memory, Hy”d.

The atzeres was led by Gedolei Torah and Rabbanim, including Hagaon Harav Aharon Leib Steinman, shlita, who addressed the assemblage in a special video presentation.

Harav Steinman said: “People were killed during tefillah while wearing tallis and tefillin. It is terrible and frightening, what has happened to us. Each of us has to strengthen himself in Torah and learn as much as possible, and Hakadosh Baruch Hu will help to end our suffering.”

He quoted the well-known Gemara of the Tanna’im crying upon seeing the place of the Beis Hamikdash desolate, with foxes running wild on the makom Hamikdash, but Rabi Akiva was laughing. When they asked him why he was happy, Rabi Akiva responded, “After I have seen the first nevuah was fulfilled, I am now certain that the other nevuah will be fulfilled, that the Beis Hamikdash will be rebuilt.” The Tann-a’im answered to Rabi Akiva, “Akiva nichamtanu – Akiva you have comforted us.”

To witness such horrific scenes, said Harav Zilber, only brings to mind the passuk “Im yehareg b’Mikdash Hashem Kohen v’navi, if a Kohen and Navi will be killed in the Beis Mikdrash.” Here, we had not one, but four korbanos killed in the shul. On the one hand it is terrible to even fathom; on the other it can be a cause of a nechamah.

“After such a chillul Hashem,” concluded Harav Zilber, “of a killing in a shul, the only real comfort can be Yisgadal veYiskadesh, to sanctify and glorify Hashem’s name, by adding to Torah, tefillah and ma’asim tovim, which will undoubtedly be a zechus for their memories.”

The next speaker was the Rav of the shul, Harav Yitzchak Mordechai Rubin, shlita.

He began with the Gemara in Gittin, discussing the Churban Habayis, which mentions the death of Chanah and her seven sons. They were all killed by the Caesar, after not wanting to serve avodah zarah. When the youngest son was taken out to be killed, Chanah embraced him and cried out, “My son, go to Avraham our forefather and tell him: You bound one son to be sacrificed. I have sacrificed seven!”

“These korbanos will be sorely missed, all in their own special way.” The Rav also mentioned those still in need of a refuah sheleimah.

Harav Rubin said that there are many who may have questions: why did this happen to them, why did it happen in our shul, why during davening.

He related a story from the Chazon Ish, zt”l, who was asked after the Holocaust how Hashem could do such a thing. The Chazon Ish replied with an analogy to a tailor, who is brought a nice piece of fabric to make into a suit. After the client has his measurements taken, the tailor cuts the fabric to pieces, to the astonishment of the client. “You are ruining the good piece of material that I brought you,” he says. “Wait,” explains the tailor, “until the whole suit is sewn. Then you will understand why it was all done.”

In the same manner, explained the Chazon Ish, we don’t yet have the full understanding of what and why each thing happens in this world, but we believe that it is all in the Master Plan.

Harav Rubin mentioned that in davening we recite the Mishnayos of Eizehu Mekoman shel Zvachim. The mefarshim say that this perek was chosen, not only being of korbanos, but also that it is the only perek in Mishnayos without a machlokes. Perhaps this was the reason that this shul was chosen to offer these korbanos, as the shul is noted as being a place without machlokes. This could also be the lesson we can learn from the Kedoshim, to stay away from all sorts of machlokes of any kind.

He wept inconsolably throughout his emotional hesped.

Reb Baruch Mordechai quoted the famous Rambam, that when troubles befall Klal Yisrael, it is a sign that we need to better ourselves. It is no chachmah to pass the blame to others, to find what they need to better; rather each of us needs to see what he can do better in his avodas Hashem.

In 5689/1929, the Arabs massacred dozens in the Chevron Yeshivah. It was noted that the biggest masmid in the yeshivah was killed with an axe; this axe has now come to Har Nof, killing four mispallelim, concluded Harav Ezrachi.

Harav Moshe Hillel Hirsch, shlita, Rosh Yeshivah, Slobodka, spoke next. He elaborated on the need to strengthen ourselves in bitachon, even in such a trying time. The Ramchal says that when Hashem sends a nisayon, a test ­— even a difficult one — it is to see how the Bnei Yisrael receive it and overcome it. We are expected to rise and grow in emunah and bitachon after such a tragic event.

A video of Hagaon Harav Aharon Leib Steinman, shlita, was screened. Harav Steinman quoted a passuk in Melachim discussing the murder of one tzaddik. “If one tzaddik being killed is called a churban, then four tzaddikim, killed wearing their tallis and tefillin is an incredible churban.”

“We all need chizuk in Torah and yiras Shamayim. May Hashem help that we shall not need to mourn anymore.”

Rabbi Avraham Rubinstein brought divrei chizuk from Hagaon Harav Chaim Kanievsky, shlita, who said that perhaps this tragedy in a shul is to awaken us that we should give the proper honor to the shuls; refrain from talking dvarim beteilim in shul; how much more not to speak lashon hara or bizayon talmidei chachamim.”

He also conveyed divrei chizuk from Harav Nissim Karelitz, shlita, who said that the chizuk needed is to come to davening on time.

The crowd then rose, as the Belzer Rebbe, shlita, arrived at the hesped.

He mentioned that if the Arab murderers found their way into a makom kadosh, a shul, it shows that we are not insulated enough. Our limud from this needs to be that we need to enclose ourselves, our homes and our children, that the Satan and the yetzer hara — or their devices — shouldn’t make their way into our houses. Ma tovu ohalecha Yaakov. We need to protect ourselves, not only in gashmiyus, but in the ruchniyus as well. This will be our protection; it will stand in our stead.

The event was concluded with an emotional Kaddish.

This article appeared in print on page 2 of the November 26th, 2014 edition of Hamodia.