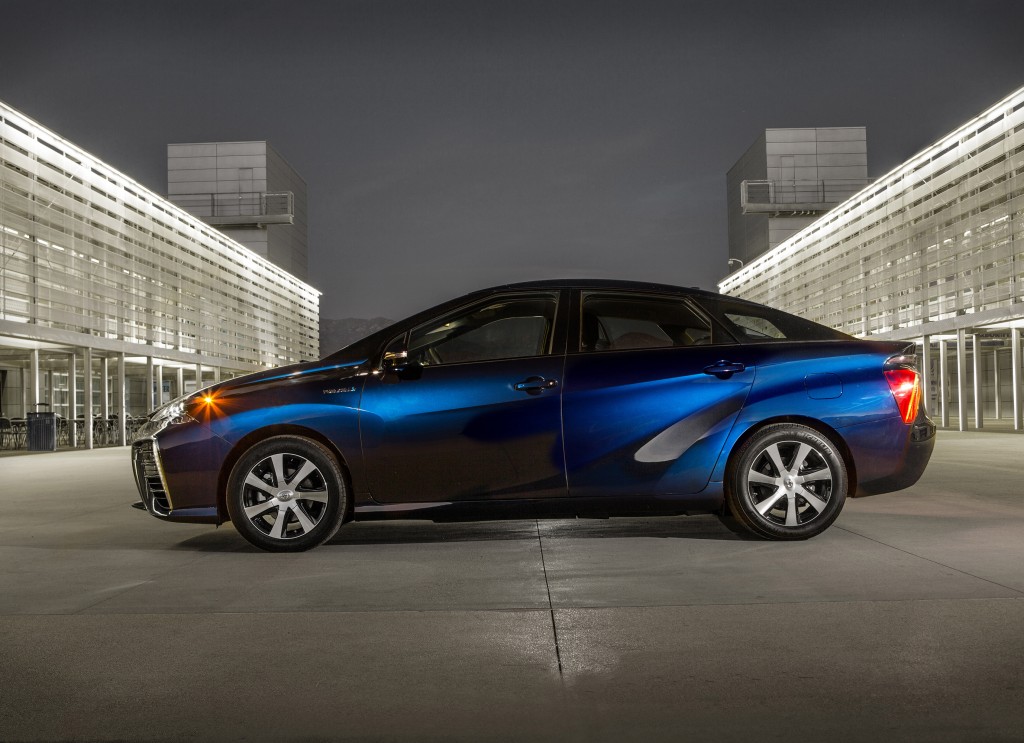 As Toyota sees it, the future isn’t some fuzzy, far-off point in the distance. It’s here in the form of a midsize sedan I was able to drive last week, when the Japanese automaker made its bold bet on hydrogen.

It takes little more than a glance to understand the Mirai fuel-cell vehicle is different. Whether it’s the dramatic air intakes at both front corners that force oxygen to interact with the key ingredient that generates onboard electricity, or a tailpipe that slowly drips water, the Mirai reads as a sedan while simultaneously hinting at what’s happening under the hood.

Upon opening the driver-side door and sliding into its leatherette seats, it’s clear the Mirai is similarly futuristic inside. Starting at the premium price of $57,500, or $499 per month to lease, the interior fit and finish is a hybrid, so to speak, of the Prius and a more upscale Lexus. Its black interior feels modern with a swipe screen housed in shiny piano black and offset with bright blue buttons and silver trimming.

Prius drivers will recognize the two-tier dash, the top level of which displays the most pertinent EV information, such as what drive mode it’s in, how much power it’s using and, most importantly for a vehicle that is supported by only 10 refueling stations in all of California at present, how many miles until it’s empty.

The Mirai can travel up to 300 miles on a full tank, and refills in about five minutes.

In my 40 minutes with the Mirai, I drove past one of those fueling stations and stopped to refuel at the one Southern California station that is blazing a trail for renewably produced hydrogen. Run by the Orange County Sanitation District, it’s designed to transform the methane generated on site at the wastewater-treatment plant into hydrogen that can be pumped into cars. A demonstration project, the station is currently supplied with hydrogen that is trucked in, but it’s expected the plant will resume hydrogen-making operations early next year.

Because the Mirai’s two hydrogen fuel tanks are located under and behind the rear seats, the fuel door is located in the same place where it’s normally found on a gas-powered car.

The tanks’ locations means the rear seat only accommodates two passengers, similar to the current-generation Chevrolet Volt. The two seats are bisected with a large cubby/armrest outfitted with cup holders and controls for the heated seats.

All four seats are heatable. They are also moderately bolstered and comfortable.

The Mirai weighs 4,050 pounds, but the weight of its fuel-cell stack is centered and low, so it didn’t handle like a sled. That said, I was aware of its weight in the form of a solid ride that felt planted and responsive enough in the corners.

The only sound was the whir of its electric motor. Even at highway speeds, the Mirai was quiet — a combination of it being an electric car whose fuel-cell stack is under the front seats and it being housed in carbon-fiber reinforced plastic, which helps dampen road noise.

The Mirai can be driven in two modes. Eco numbs the accelerator feel; Power is more satisfying. It took little pedal effort to unbridle its full accelerative potential, which Toyota estimates at 0 to 60 mph in about nine seconds.

Available in California starting next fall for lease as well as outright purchase, the Mirai can be had in a single trim and four colors — gray, black, white and blue. Only one other option will be offered: Power Takeoff is a plug that’s housed in the trunk and can be used to turn the car into a backup power generator during electricity blackouts.

That trunk is another area in which the interior has been compromised due to its unique hydrogen powertrain. The two fuel tanks, which sit under and behind the rear seats, impinge a bit on its space but nowhere near as severely as a CNG car.

Given that the Mirai is carrying twin tanks of potentially explosive hydrogen, Toyota has built in multiple safety features as standard equipment, including adaptive cruise control to maintain a safe following distance and a lane-keeping assistant that notifies the driver when he’s about to veer off path.

Coming in a bit hot to a red light behind an SUV, I learned about another safety feature when the Mirai engaged its collision-mitigation braking system on my behalf, tensioning the seat belts and preloading the brakes with maximum force to avoid impact. Under normal braking conditions, being an electric car, the Mirai is outfitted with regenerative brakes to help recapture the kinetic energy from slowing and feed it back to the powertrain to enhance range.

With its Mirai, Toyota has built a production hydrogen vehicle that walks the tightrope between mainstream acceptance and a brave new world in a car that balances the familiar with the new.

Welcome to the future.