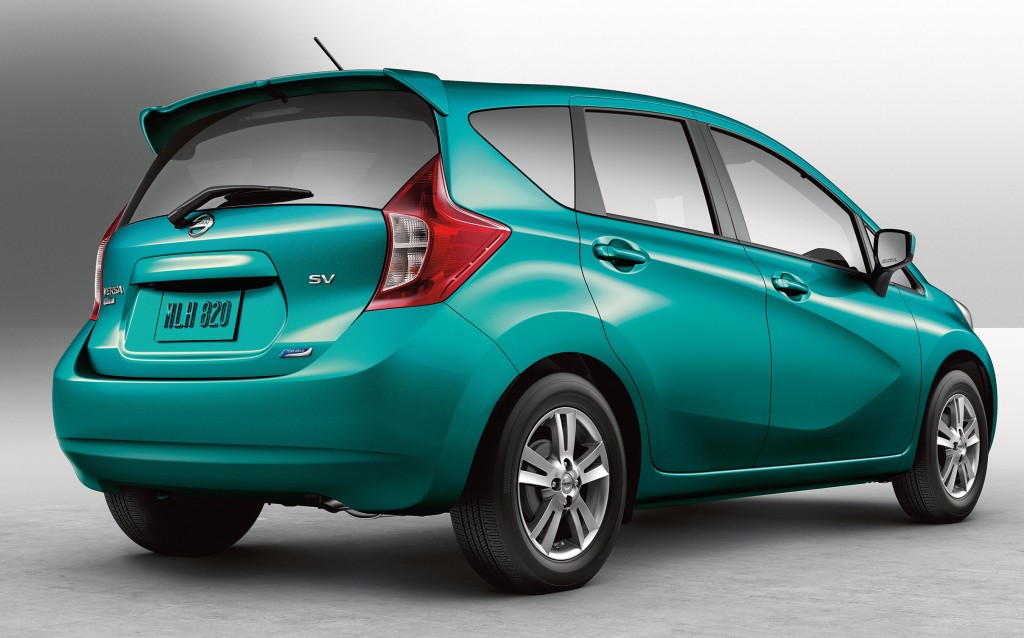 For 2015, the Note’s starting price is $14,180 (plus $810 freight) for the base model S with a five-speed manual transmission. With an automatic transmission, the lowest-priced version is the Note S Plus, which begins at $15,430. It comes with a continuously variable transmission, or CVT.

Prices range as high as $17,960 for the SL model with the CVT. For this report, we tested the Note SR model with the CVT, which had a base price of $17,530. It came with the SR Convenience Package ($660), which added NissanConnect with Mobile Apps, five-inch color monitor, satellite radio, a backup camera, Bluetooth streaming audio, hands-free text messaging, and the Divide-n-Hide adjustable cargo floor.

After the redesign, the two Versa models are different beyond just the hatchback versus sedan configurations. The Note, which is more than a foot shorter than the sedan, has its own distinct look, and actually is on a different chassis.

Both versions have the same engine and transmissions. The engine is an advanced 1.6-liter inline four-cylinder with 109 horsepower and 107 pound-feet of torque. That doesn’t sound like much, but I gave my tester quite a workout on Interstate highways and mountain roads, and never felt like there was not sufficient power. On the freeways, the Note would easily exceed the posted speed limits, with plenty of power in reserve.

The automatic on the Note models and all but the base automatic version of the sedan is Nissan’s newest-generation Xtronic CVT, a smooth-shifting transmission with no discernable shift points. The S sedan’s automatic is a conventional four-speed, but it isn’t offered on the Note.

My tester’s CVT shifted seamlessly with little effort. Even with the noisiness that comes from the engine over-revving with a CVT, the Note was very quiet inside for a car in this price class.

The interior of the Note is quite roomy. We put five people inside for an evening trip to a restaurant, and everyone fit okay for the short drive. There is a total of 115.5 cubic feet of space in the cabin, including cargo space of 21.4 cubic feet behind the rear seat.

Even with the driver’s seat pushed back, there was plenty of rear leg and knee room — more than I’ve seen in many of today’s midsize sedans.

Up front, there are comfortable bucket seats, with a center console that has two cupholders, USB/auxiliary inputs, and a rear tray that is accessible to rear-seat passengers.

With the SR model, rear passengers have a fold-down center armrest with dual cupholders, which eliminates the middle seating position when it’s down, but makes it more comfortable for the two outboard passengers.

The Divide-N-Hide adjustable floor and the 60/40-split fold-down rear seat folded, there is a large, flat cargo area all the way to the front seatbacks. Under the cargo floor is a hidden storage area, which also creates a deep well for taller cargo.

Not included on our car, but available, was the Around View Monitor, which uses four small wide-angle cameras mounted on the front, side and rear of the car to project a virtual 360-degree view of the area around the vehicle, as though you are looking down on it from above. It’s great for maneuvering in tight spots. It’s part of the SL Tech Package ($790), which also brings heated outside mirrors, and NissanConnect with navigation, NavTraffic and NavWeather.

The only other extra on our tester was the carpeted floor and cargo mats ($180).

Total sticker price of our SR tester was $19,180, including freight and options.

Advantages: Redesigned for 2014, this is the hatchback version of Nissan’s entry-level car for the U.S. market. It’s economical to buy and operate, and has more interior space than its competitors and as much rear passenger room as some midsize cars.

Side air bags: Front seat-mounted; side-curtain for both rows.