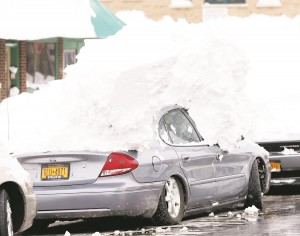 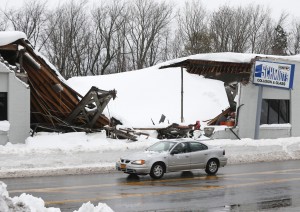 The entire length of the interstate Thruway reopened Sunday afternoon after snow from last week’s lake-effect storm in the Buffalo area was removed.

More than 80 snowbound vehicles were towed from the highway to three lots. Drivers can find out where to pick up their vehicles at the Thruway website (www.thruway.ny.gov).

During the storm that dumped up to 7 feet of snow on towns south of Buffalo, a 132-mile stretch of Thruway was closed, from Rochester to the Pennsylvania line. More than 150 vehicles, including many tractor-trailers and several buses, were stranded.

But while Buffalo is making significant progress clearing streets, a flooding threat looms as temperatures climbed into the 40s Sunday. A flood warning from the National Weather Service is in effect until Monday afternoon.

“We are preparing for the worst but hoping for the best,” Mayor Byron Brown said.

Buffalo lived up to its nickname, “The City of Good Neighbors,” as hundreds of volunteers turned out in a “shovel brigade” Saturday.

“They’re like angels,” said Kevin Masterson, 61, after a handful of volunteers swarmed in to free his and his brother-in-law’s cars from the drifts. “I was out shoveling and … all of the sudden I had all these people.”

One of the volunteers, Greg Schreiber, said he’d keep going “until the back gives out.”

City officials said residents should prepare for the possibility of flooded basements in the coming days. Rain was expected Sunday and temperatures were forecast to approach 60 degrees on Monday, accompanied by more rain.

The snow, which began late Monday and finally cleared out of all areas by daybreak Friday, has been blamed for at least a dozen deaths.

This article appeared in print on page 5 of the November 24th, 2014 edition of Hamodia.