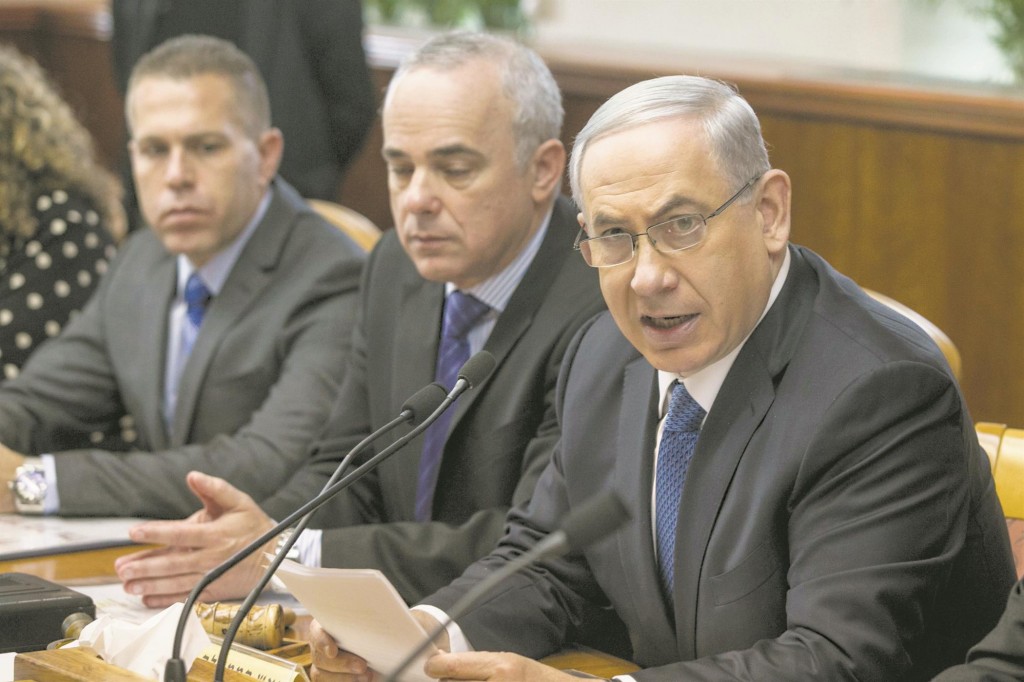 Israeli Prime Minister Binyamin Netanyahu had his way on Sunday as the cabinet voted 14-6 to allow the government to draft a basic law to define Israel as the nation-state of the Jewish people, but only after seething coalition tensions erupted into open bickering and shouting.

Riding roughshod over the objections of Yesh Atid and The Movement ministers, Netanyahu plans to introduce the bill in the Knesset on Wednesday.

Netanyahu had complained before the meeting that the threats and ultimatums by his coalition partners to break up the government over this and other issues cannot go on. “The country cannot be run in this manner,” he said.

“We need to focus on strengthening security in the face of waves of Islamic extremism and the danger of a nuclear Iran, on strengthening Israel’s economy and the citizens’ welfare, and not with threats,” he said. “I hope the heads of the coalition parties will unite and act in this spirit.”

But in this the prime minister did not get his way. Shouted accusations could be heard from outside the closed-door meeting.

Justice Minister Tzipi Livni was a prime target of Netanyahu’s fury. “We wouldn’t have gotten here if Livni acted differently,” he said, referring to her decision to postpone voting on the bill in her committee.

Referring to Netanyahu’s anger over her support for the “Israel Hayom bill,” which would prevent free distribution of the popular pro-Netanyahu newspaper, Livni said, “If all this nonsense is just for revenge, then you won. Now let’s talk about substance before you destroy the country.”

“Let’s talk about the elephant in the room. You want us” — The Movement and Yesh Atid — “to vote against this so you can fire us,” Livni said.

Science Minister Yaakov Peri (Yesh Atid), who had called it “dangerous,” criticized the timing of the proposed legislation. “I don’t understand the rush for the bill now in this sensitive time,” said the former Shin Bet head.

At this, Netanyahu reportedly banged on the table and said “it cannot be that Arabs can live in Jewish towns, but Jews can’t live in Arab towns. A country within a country is developing.”

Netanyahu argued that the new law would affirm the Jewish character of the state while preserving democracy and protecting the rights of minorities. Livni insists that in its present form it would violate constitutional rights.

Sources in the meeting told reporters that when Netanyahu said this is not a time for weakness and hypocrisy, Finance Minister Yair Lapid, who voted against the bill, retorted that not everyone who disagrees with the prime minister is weak.

“The nationality law being presented to the government is a bad law that was only drafted for the sake of Likud primaries,” Lapid charged. “This is a law that [David] Ben-Gurion, [Ze’ev] Jabotinsky and [Menachem] Begin would oppose,” naming Netanyahu’s political heroes.

Added Lapid, “This morning I spoke with the family of Zidan Saif, [the Druze policeman] who was killed protecting Jewish worshipers during the terror attack in Har Nof. What can we say to this family? That he is a second-class citizen?”

The votes in favor included all Likud, Yisrael Beitenu and Jewish Home ministers, except for Culture and Sports Minister Limor Livnat (Likud), who was not present.

Later on Sunday both Lapid and Livni said their parties would not vote for the bill in its present form when it comes to the plenum.