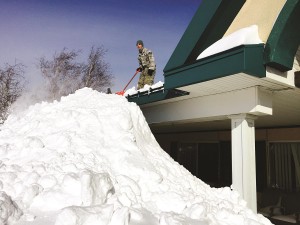 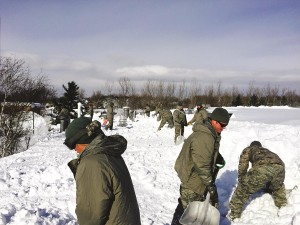 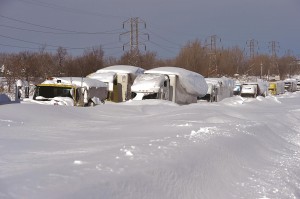 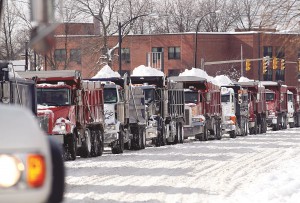 Roofs began to creak and collapse under the weight as another storm brought the Buffalo area’s three-day snowfall total Thursday to an epic seven feet or more, inching toward an all-time record for a 24-hour period.

Snow-weary residents of western New York were asked by Gov. Andrew Cuomo to “pretty, pretty please” stay off slippery, car-clogged roads for another day as crews struggled to dig out more than 300 trucks. Some areas got close to three feet of new snow by Thursday afternoon.

The wild card was an expected weekend warmup with rain — raising the specter of flooding and an even heavier load pressing down on roofs, where the snow could absorb the rain like a blanket.

More than 30 people were evacuated from several mobile home parks in suburban Cheektowaga, where roofs were buckling. More than a dozen buildings and carports collapsed, as did a metal warehouse operated by a decorations company, where damage was estimated in the millions.

Homeowners and store employees around the region climbed onto roofs to shovel off the snow and reduce the danger.

The immediate concern Thursday was recovering from the 5 feet or more of snow that fell earlier in the week. National Guardsmen drove nurses to work their hospital shifts. State troopers helped elderly residents trapped in their homes. State officials assembled 463 plows, 129 loaders and 40 dump trucks from across the state.

Some Buffalo-area schools were closed for the third day, burning through snow days with winter still a month away.

A stretch of the New York State Thruway remained closed, with more than 300 truckers idled at truck stops and service areas, waiting for the highway to reopen. With deliveries interrupted, some grocery stores reported running low on staples like bread and milk.

Even for the Buffalo area — one of the snowiest and hardiest places in America — this was one for the record books, with the three-day total close to the 8 feet that the region typically gets in an entire year.

“No matter how you cut it, this event will end up in the top five for the Lake Erie area,” said National Weather Service Director Louis Uccellini.

This article appeared in print on page 6 of the November 21st, 2014 edition of Hamodia.