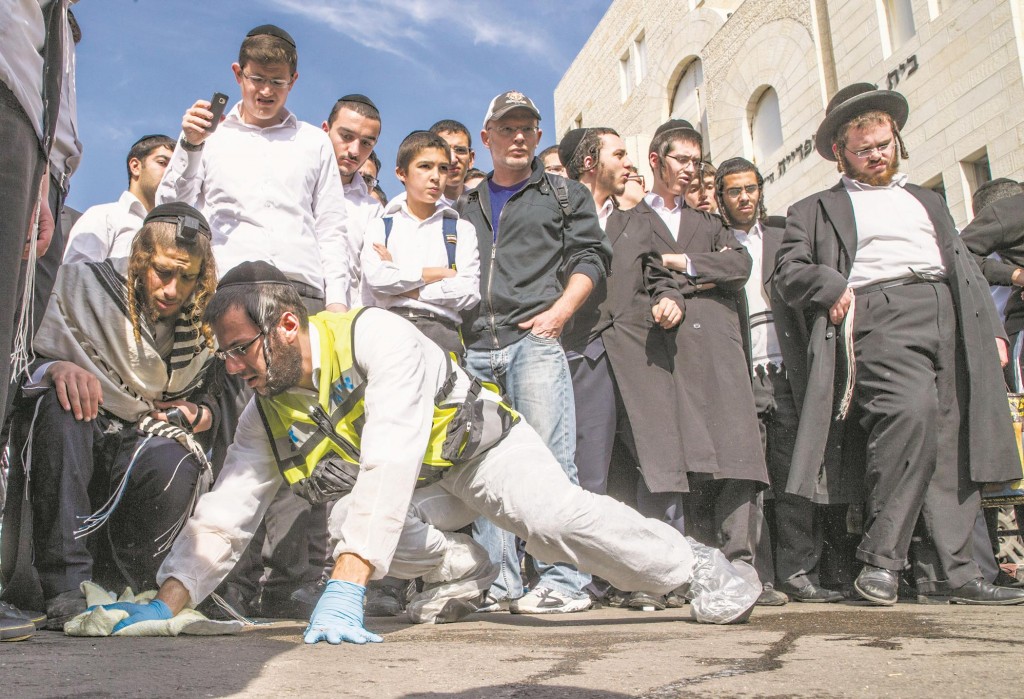 The terrorist attack in Har Nof on Tuesday morning drew condemnations from within Israel and abroad.

“There is and can be no justification for such attacks against innocent civilians. The thoughts and prayers of the American people are with the victims and families of all those who were killed and injured in this horrific attack and in other recent violence. At this sensitive moment in Yerushalayim, it is all the more important for Israeli and Palestinian leaders and ordinary citizens to work cooperatively together to lower tensions, reject violence, and seek a path forward towards peace.”

Later in the morning, Obama prefaced scheduled remarks to the press about Ebola by addressing the terror attack. He called it a “a tragedy for both nations, Israel as well as the United States,” and stressed that “our hearts go out to the families who obviously are undergoing enormous grief right now.”

Obama also made a point of stating that “President Abbas has strongly condemned the attacks.”

Secretary of State John Kerry telephoned Prime Minister Netanyahu to offer condolences following the gruesome killing spree. Kerry, in London for talks on Iran and the Middle East, said in a quavering voice:

“Innocent people who had come to worship died in the sanctuary of a synagogue. They were hatcheted, hacked and murdered in that holy place in an act of pure terror and senseless brutality and murder. I call on Palestinians at every single level of leadership to condemn this in the most powerful terms. This violence has no place anywhere, particularly after the discussion that we just had the other day in Amman.”

“To have disorder and terror interrupt the calm of morning prayers is deplorable and sickening to the core,” said Menendez, noting that one of the victims, Rabbi Moshe Twersky, Hy”d, was from his state of New Jersey. “This tragedy demands a forceful response from President Abbas of the Palestinian Authority. His words of condemnation are welcome, but must be followed up by a sincere demonstration of leadership.

“Abbas should use every tool at his disposal to de-escalate this worsening situation in Jerusalem,” Menendez continued, “and guide the Palestinian people to reject violence and promote peace.”

Various American elected officials and several American organizations including the Conference of Presidents of Major American Jewish Organizations have expressed anger and outrage at the attack.

Canadian Foreign Minister John Baird deplored the “savage” attack. “Attacks on innocent worshippers, in what is supposed to be a place of peace and tranquility, are cowardly and must never be tolerated,” said Baird.

“Those engaging in these despicable terrorist acts, and those financing or morally supporting their actions, are responsible for further aggravating an already fraught and dangerous situation,” Baird added.

“Canada reiterates that any statements of incitement are completely irresponsible. Those leaders who regularly issue them cannot plead ignorance or look the other way when terrorist attacks like today’s occur,” he said.

Condemnations also came in from the U.N., the European Union, Germany, Turkey and Bahrain.

However, Prime Minister Binyamin Netanyahu was indignant over the lack of reaction from other countries.

“I call on all the leaders of countries in the Western world: I want to see outrage over this massacre. I want to see denunciation,” he said at a press conference in Yerushalayim on Tuesday night.

“We are in the midst of a terror campaign focused on Yerushalayim. In the middle of Shacharit, while wrapped in tallit and tefillin, four Rabbis were slaughtered, four innocent and pure Jews. The animals who committed this massacre came charged with vast hatred from wide-ranging incitement against the Jewish people and its country,” Netanyahu said.

“Hamas, the Islamic Movement, and the Palestinian Authority are spreading countless libels and lies against the state of Israel. They say the Jews are defiling the Temple Mount. They say we mean to destroy the holy sites there, and that we mean to change the praying arrangements there. It’s all a lie. And these lies have already exacted a very steep price,” he noted.

Earlier in the day, Aharonovitch ordered consideration of easing the restrictions on firearms possession for security personnel and ex-IDF officers. In addition, he said that four more companies of Border Patrol officers would be deployed to reinforce police patrols across the country with civil guard and police volunteers, in Arab villages and at checkpoints.

United Torah Judaism MK Yaakov Asher said that every synagogue should have at least one security guard during Shacharis.

Shas chairman Aryeh Deri, who lives in Har Nof, not far from the scene of the massacre, declared on Tuesday that “the horrible massacre of worshipers in a synagogue does not leave us any choice. We are at war for our lives.

“I call on the prime minister to treat these events as a war situation in every way and start an uncompromising operation to eradicate terrorism in Yerushalayim and bring quiet and security back to the residents,” stated Deri.