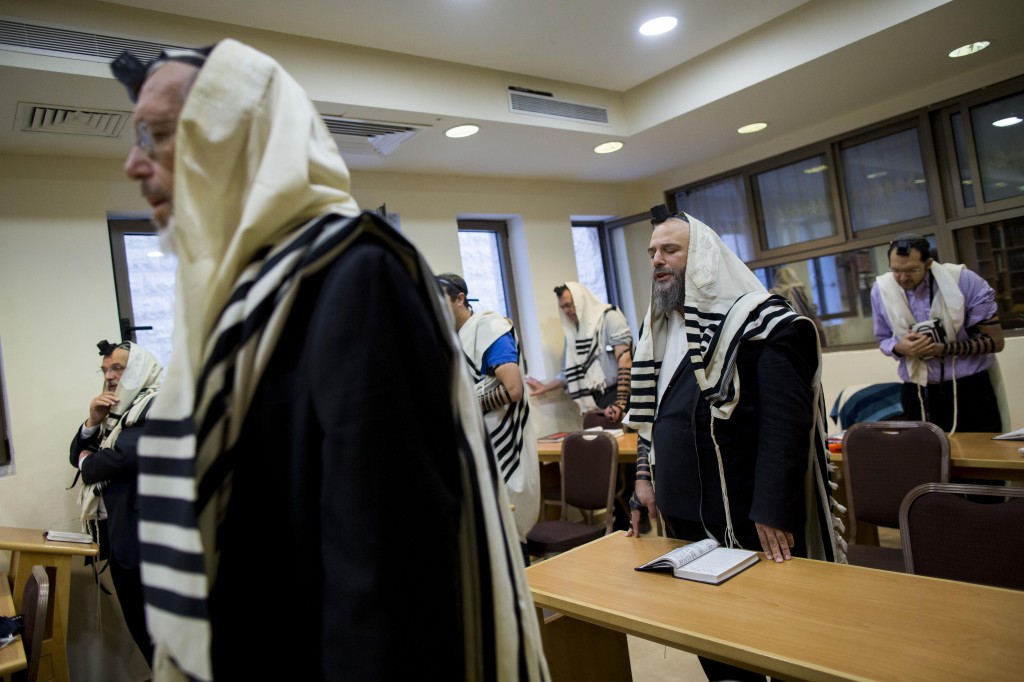 Rebbetzin Tziporah Heller describes her personal experience, provides chizuk, and asks for tefillos on behalf of her wounded son-in-law and the other injured survivors of the Har Nof massacre in this letter that she disseminated among friends and acquaintances and, here, Hamodia’s readership. Her wish is that as many people as possible hear what transpired in Har Nof.

Yesterday at about 7 a.m. my daughter Miri called. “Mordechai just came home from shul. He said that Arabs came in and are shooting, and that a man with an axe is hitting everyone. [Note: the weapon was actually a cleaver.] Some of the people threw chairs at them, but it didn’t help.” The 12-year-old had hit the floor along with everyone else when the bullets began to fly. He was fully aware of what was going on, and what it meant. He somehow found the courage to let go of his father’s hand, crawl towards the exit and break into a run.

Some of you know Miri and her family. She has had some of you over for Shabbos and holidays, and others sleeping in one of her kids’ bedrooms when the crowd at my house gets too big to accommodate sanely. Mordechai is blond, freckled, and a soft-spoken, somewhat introverted and studious boy, much like his father, Shmuli. He is not Huck Finn, and the courage he found at those moments was a gift straight from G-d. By the time he finished telling Miri what happened, sirens from Hatzalah ambulances, police cars, and Magen David could be heard — telling her that there were casualties.

“Where’s Shmuli?” was the thought that entered her mind again and again as the seconds, which felt like hours, began to tick. She called me and said, “Say Tehillim. There is shooting in Bnei Torah.” I began to say the ancient prayers, stopped myself and called Rabbi Weidan, and told him what was happening. I then began the Tehillim again, knocked on my neighbor’s door and told her to do the same. Chani called and told me to look at the news to see what was really happening. Nothing was reported as yet. Of course not. It was only 7:10.

I realized that whether or not the attack was over, no one as yet knew whether the murderers escaped. I called again, asking that everything be done to see that no one leaves the [Neve Yerushalayim] campus, and then called Miri. Thank G-d she had the sense to stay indoors and not run to the besieged synagogue. When Mordechai came home, the shooting was still happening. By 7:20 we both realized that if she hadn’t heard from Shmuli, something was very wrong.

The police and other services had no information as yet to give to the public, but a family friend who had seen the terror with his own eyes said that Shmuli had been taken to Hadassah Ein Kerem. When Mordechai let go of his hand, he instinctively ran after the child, placing himself in the sight of the terrorists. One of them attacked him with his axe, hitting him on the left side of his head, his back and his arm. Somehow, he made it to the door.

Josh White, a student of Machon Shlomo, was riding down Agassi on his bike. He noticed what he described later as “a lot of confusion” in front of Bnei Torah. He asked someone what was going on, and surprisingly (for Har Nof) the man answered him in Hebrew! In the midst of what to him was gibberish, he picked up the word Aravim (Arabs) and immediately grasped what was happening. He approached the shul and saw Shmuli, who was still aware. The Machon student took off his shirt and stopped the bleeding, a move which may have saved Shmuli’s life.

The shooting was still happening inside. It was about 7:15! The emergency crew drew back, but because Shmuli was already outside, they evacuated him, thus making him the first of the wounded to be taken to Hadassah, another factor in his survival. Before collapsing, he asked where Mordechai was, and when he was told that the boy ran away from the carnage, he said, “Baruch Hashem.”

Inside, the terrorists were continuing their “work.” When they entered, they turned to their left, and immediately cut down Harav Moshe Twersky and Rabbi Kalman Levine, who were standing in the corner. Reb Kalman was the husband of Chaya, formerly Markowitz, who was a student and later a madrichah at Neve. Her husband was not a regular attendee of Bnei Torah. He would generally daven in the earliest possible minyan so he could get in a couple of hours of learning before beginning his day. Yesterday he had a question about something he had learned and had gone after davening to Bnei Torah to put the question to its erudite Rav, Rabbi Rubin. The question will now only be resolved in the Heavenly Academy.

Rabbi Avraham Goldberg, the third man to be killed, is Breina Goldberg’s husband. Many of you know Breina as [Neve’s] warm, caring, efficient secretary-cum-mother figure at the front desk in the afternoon. I don’t as yet know how her husband, or Rabbi Aryeh Kupinski, the fourth victim, met their deaths. The only thing that I know is that it was brutal and swift.

The first policemen to enter were traffic cops who knew what they were facing, and also knew that they were not wearing protective gear. They entered anyway and, together with the forces that came afterwards, ended the bloodbath. By 7:30 the murderers were apprehended.

Miri, my daughter Guli, and her husband were in Hadassah. Miri’s other kids were watched by relatives and friends for the day. Mordechai was urged to speak about what he saw again and again in order to diminish the damage of the trauma he had undergone. The rest of the family flowed in, saying Tehillim and waiting for updates. The hospital social worker, Aviva, who is blessed with the rare gift of being empathic without being overbearing, and the women of Ezer Mitzion (a volunteer organization) kept us well supplied with food, calming conversation and practical advice. We were allowed to see Shmuli, who was put under anesthesia. We don’t know if he heard us or not, but we were talking to him, stressing that Mordechai was fine.

In the hours before the surgery was done, we found ourselves with Risa Rotman. Her husband, Chaim Yechiel ben Malkah, was also attacked, and the extent of his wounds is very serious. Some of you may know Risa  …, and those of you whose husbands learned in Ohr Somayach or who recall Reb Meir Shuster, whom he helped unstintingly for years, may know him as Howie.

The policeman who entered first passed away. May Hashem avenge his blood.

Every day in Eretz Yisrael is a gift and a miracle. I have no pretensions of knowing Hashem’s will, but I do know that everything He does is purposeful and that His compassion is often hidden from the human eye. Anyone who values human life and reality and the eternal nature of the soul is appalled by the idea of people entering a synagogue and randomly killing people whom they never met.

Except for CNN. They reported the entire event as an attack on a mosque.

Except for BBC. They reported that the Israeli police killed two Palestinians (they meant the murderers). The victims of Israeli brutality presumably were going on a stroll through scenic Har Nof when attacked by the racist troops….

Please post the truth to whomever you can reach.

Please, please continue saying Tehillim for Shmuel Yerucham ben Baila and the other victims. Daven that Hashem give strength to the five new widows and 24 new orphans. Most of all, thank Hashem that we are not “them,” and treasure Hashem’s Torah and His Land.

A final addition (which I found out only today when my son-in-law began to speak to us again — BaruchHashem!) is that after Mordechai left the shul in the brief period of time that the murderers were distracted, Shmuli thought that there was no escape and tried to tackle the Arab who was wielding the cleaver. The Arab with the gun had already run out of bullets and was just “helping” his companion. He thought that there was no escape, and that there was nothing to lose by attempting to kill him. It was then that he sustained his wounds. He didn’t let go, and the Arab pushed the door open and literally threw him out of the shul. This is what saved his life.

I think that the way Hashem clearly intervened in influencing the thought pattern of a murderer to save a life is the sort of thing that we have to take to heart.

I only wish that I heard the same news from the other petzuim that I heard about Shmuel. Things aren’t easy for anyone.