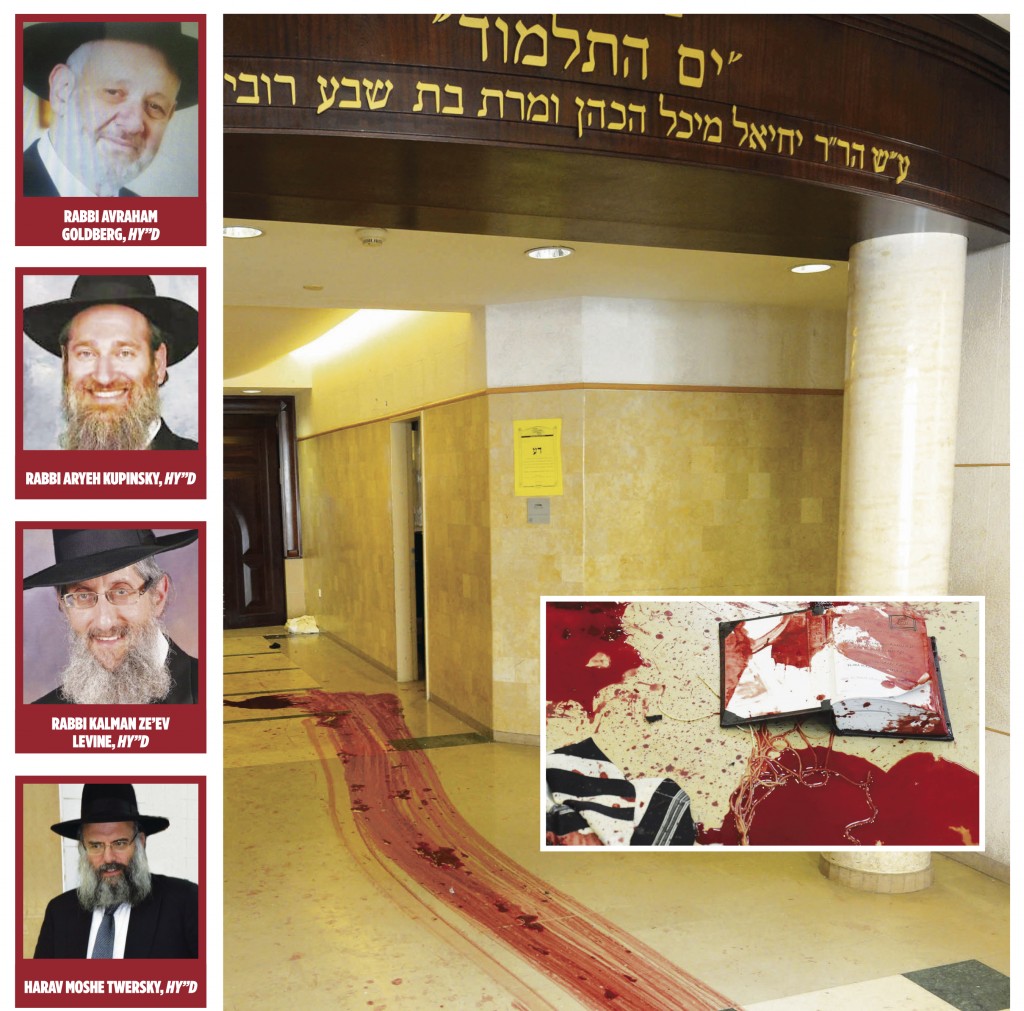 This time the butcher knives and guns of the Arab terrorists burst into the Kehilas Yaakov shul in Har Nof, in the middle of Shacharis on Tuesday morning, and within minutes four Jews, Hy”d, were murdered, wearing their tallisos and tefillin. Eight others were wounded.

It did not take long for the lives of the victims and their families and friends, their talmidim and chevrusos, and all their neighbors in Har Nof, to change forever. The horror began at 7:01 a.m. By 7:08 it was over.

Police, answering the emergency call, exchanged fire with the terrorists. Two policeman were injured, one, a Druze, eventually succumbing to his wounds. The other policeman was moderately injured.

The two terrorists were shot dead at the scene by police. They were identified as cousins, Uday and Rassan Abu Jamal, from the Jabel Mukabar neighborhood. One of them reportedly worked at a grocery store next to the shul.

Eyewitness accounts from survivors of the attack, some of whom narrowly escaped with their lives, captured some of the horror.

Yaakov Amos, who was davening in the shul at the time of the attack, told reporters:

“During the tefillah, I heard shots and saw a worshipper wearing tefillin lying on the floor. The [attacker] passed me from the right while shouting ‘All-hu akbar!’ and firing indiscriminately. Three people fell immediately, and I saw him keep on massacring people.”

“One of the terrorists did not waste bullets and aimed directly at people. He fired and then looked at me, and chose people closer to him, shooting them at point blank range,” Amos added.

Another eyewitness, Yossi Barzani, said: “In the middle of tefillah, two terrorists entered shouting ‘All-hu akbar!’ The synagogue was in panic, and I tried to flee. At a certain stage, one of the terrorists approached me with a knife, and there was a chair and table between us.

“I drew back and ran from him and fled outside. In those moments I asked G-d to save me. My tallis got caught. I left it there and escaped. On the way out, I saw terrible sights, and bodies.”

Joseph Pasternak, a father of eight originally from Argentina, was caught in the middle of Shemoneh Esrei when he saw both terrorists, one with a handgun and one with “a butcher’s knife,” entering the shul. A man near him threw a chair at the gunman; Pasternak said he felt trapped, not knowing whether to hide or to run, he told The Times of Israel.

“I saw people lying on the floor, blood everywhere. People were trying to fight with [the attackers] but they didn’t have much of a chance,” he said.

Sarah Abrams, a mother of five, was out on her daily morning walk when she heard that something was going on at Kehilas Yaakov. “There were people running from the synagogue, and a man sitting on the pavement covered in blood; it looked like he had been stabbed,” she said. She then saw two people emerge with terrible facial wounds, “looking like they’d been attacked with knives.”

Ofer, whose brother was wounded in the attack, said his brother had been struck in the head by an axe and was undergoing surgery.

“We all love him,” said Ofer. “He is an outstanding person; he loves to help people and would never take a shekel from anyone. We hope that my brother will come out of this and keep on teaching and being a righteous family man.”

Superintendent A., the forensics officer who shot the terrorists, described what he saw as he arrived: “I entered the yeshivah and I saw a policeman with gunshot wounds and two terrorists with kitchen knives, covered in blood and holding a gun, running towards us.

“I fired at them until they were neutralized and then I and other officers searched the yeshivah. This attack reminds me of the attack at Mercaz Harav yeshivah [in Yerushalayim] six years ago,” he added, referring to the attack in which several students were murdered as they sat in the beis medrash.

“I don’t remember seeing a disaster scene as shocking as this, [the victims] wrapped in tallit and tefillin,” Yehuda Meshi-Zahav, founder of ZAKA, told Arutz Sheva. There were “puddles, rivers of blood throughout the entire synagogue, siddurim thrown all over the floor.”

“These are Jews who got up early in the morning to pray to the Creator of the World, and in the middle of their prayers — in the middle of a religious act, of an act of faith, not of conflict — were attacked… I do not know what is more shocking than this,” he said.