Business AUTO REVIEW: 2015 Kia Sedona Is a Handsome Minivan — But Don’t Call It That
Business 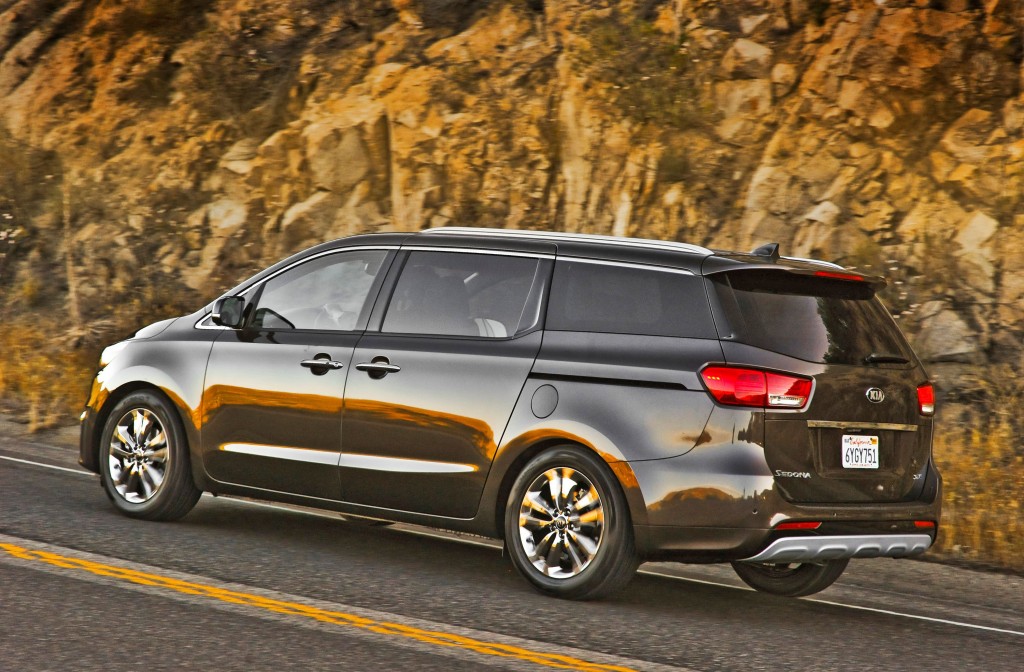 Pop quiz: What kind of vehicle seats up to eight people and has a pair of sliding doors, seats that fold out of the way and a commanding view of the parking lot at your local Gymboree?

According to Kia, it’s not a minivan.

Kia, like nearly every other purveyor of minivans, insists the Sedona is too cool to be called a minivan.

Kia’s new ad campaign uses the tag line, “It’s not a sports car, it’s a Sedona.” Lest Corvette owners start lining up for a trade-in.

Curiously, buyers seem to have much less problem with being seen in a minivan. Honda, Toyota, Chrysler and Dodge each sell at least 120,000 of them a year.

In Kia’s defense, the new Sedona has the styling moxie to back up this otherwise silly identity crisis. By avoiding excessive body cladding between the wheels, squaring off the Sedona’s profile and moving the wheels closer to the corners, the 2015 edition can almost pass as a large crossover SUV.

That similarity matters to Kia, which says 54 percent of minivan shoppers — regardless of what they call the thing — are empty-nesters. Think grandparents with “active lifestyles” who still appreciate minivan practicality but also crave the style and amenities offered in many crossovers.

Unfortunately, segment-leading handsomeness is all that distinguishes the Sedona from its peers. Kia missed an opportunity to set itself apart from a pack of relatively stale competitors.

The inside of the Sedona is built for seven people in standard trim, with a pair of reclining captain’s chairs in the second row and a bench in the rear (an optional eighth seat wedges in the middle of the second row). Every seat in the house is spacious enough for tall adults, if not particularly plush.

Our nearly loaded, $43,295 SXL tester included “first-class lounge seating” for the second row. In addition to reclining, the seats move side-to-side and fore-aft, and each has a leg rest that pops out. Picture a La-Z-Boy recliner with less room for your legs and no tiny fridge built into the side.

This Sedona’s third row flips and folds into the floor like all minivans should, though the heft of the seats makes this a chore, even for athletic adults. With the seats in place, their cubby in the floor of the trunk creates a useful cavern for gear.

The middle row doesn’t disappear into the floor as in Chrysler and Dodge models, though the seat cushion does fold up, and the seat forward against the front seats. This means users don’t have to remove the middle row to get a healthy amount of pure cargo room with the third row stowed.

Overall, the Honda Odyssey and Toyota Sienna have more room for both people and cargo, while the Chrysler and Dodge models rank about the same as the Kia.

From the Sedona’s driver’s seat, things were similarly average. The cabin is quiet, but the ride quality is harsh. A 276-horsepower V-6 is standard on all models, as is a six-speed automatic transmission and front-wheel drive.

That power figure is similar to its peers’, though the Sedona’s acceleration felt sluggish. This was disappointing, especially since Kia uses a slightly more powerful version of the same engine in its (lighter) Cadenza full-size sedan to great effect.

Our SXL test model is rated at 17 mpg in the city and 22 on the highway, lagging just a bit behind most of its peers. In a week of mixed driving, we averaged 20 mpg.

$43,395 may sound like a lot for a minivan — sorry, multipurpose diaper wagon — but it’s on par with others in the segment. Spend that much on the Sedona and you get lane-departure warning, a 360-degree camera system, forward-collision warning, adaptive cruise control, two sunroofs, an Infinity sound system, leather seats and power tailgate and side doors.

That’s an impressive roster of options, though we’d like to see some sort of DVD entertainment system included in it. And Kia expects the average Sedona buyer to opt for the mid-level EX version, which starts at $32,995.

This 2015 Kia holds its own, at least for now. Though it’s less practical and efficient, the Sedona is a hipper alternative to its older, more conventional peers.

But its relevance won’t last. Chrysler, which invented the minivan 30 years ago, is expected to debut a new model a year from now. Expect big things; as the segment’s sales and innovation leader, it takes minivans more seriously than most.

And completely new versions of the Honda Odyssey and Toyota Sienna won’t be far behind. At that point, this lukewarm new Sedona could become an afterthought. No matter what Kia calls it.