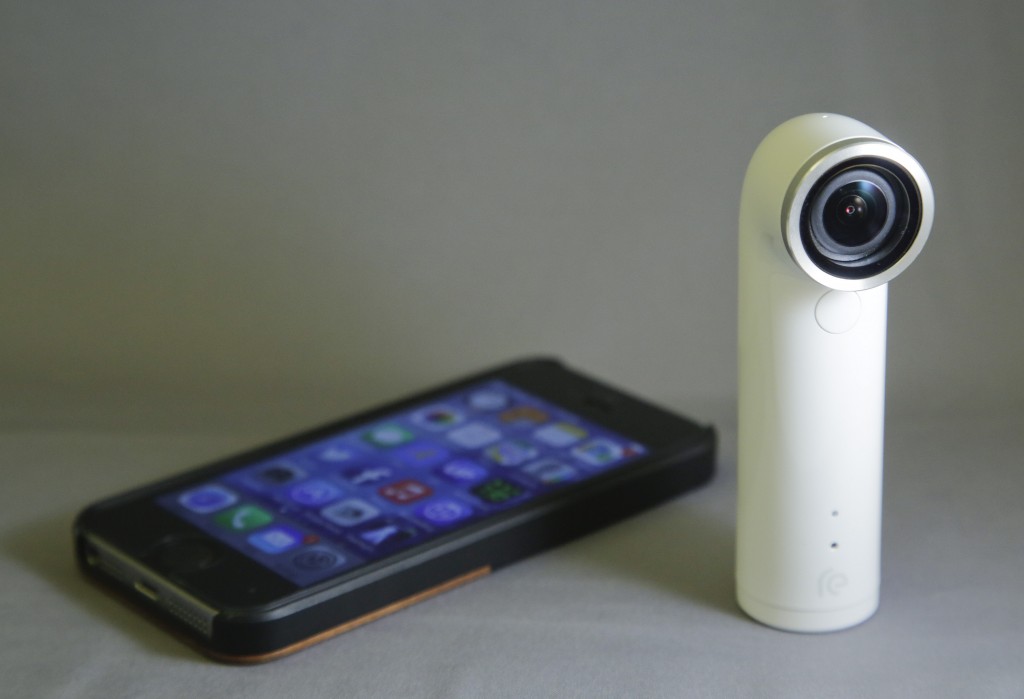 Don’t live your life through a screen.

That’s the premise behind HTC’s new Re camera, which aims to let users document all of life’s little moments and actually experience them, too, instead of watching through a viewfinder or a screen. In fact, the Re doesn’t have either – we’ll get to that.

The camera, which launched in the U.S. Saturday, is tiny, waterproof and easy to grip. But, at $199, is it good enough to replace your smartphone or digital camera?

Some people asked if it was an asthma inhaler, but the Re is better described as a miniature submarine periscope, about the size of a small candy bar. There’s no need to turn it on. You grab it, and it’s ready to shoot. To take stills of up to 16 megapixels, click one button quickly. Or, hold that button and record video at 1080p high definition. A second button triggers a slow-motion video mode.

Like I said, there’s no viewfinder or display of any kind. You can view what you’re shooting through an app on your phone, but if I’m going to do that, I might as well just take the shot with my phone.

The lens is wide-angled, so ostensibly you’ll shoot whatever you point at, but in practice it wasn’t that simple. I had to guess where subjects would end up relative to the background. Many times, they were too far off to the side. I also didn’t notice my glove obstructing many of the shots taken during a half-marathon in a Hudson Valley state park. And while phones and digital cameras show you the image as soon as you snap it, I didn’t find out my pictures were poor until I got home and looked at them on my phone.

You don’t have to have an HTC phone to control settings and transfer images to your smartphone. You can use free apps for Apple and Android devices. You can also set up backups to Dropbox or Google Drive, though that feature wasn’t working reliably with the pre-production software I tested. It’s supposed to be fixed with the version that ships.

There’s no zoom. This is a flaw with camera phones, as well, which fake zoom using a software technique that degrades image quality. But when that’s all you have, that so-called digital zoom eliminates the need to crop photos later. The Re doesn’t offer that option, so other half-marathon runners appear far ahead in the distance. With zoom, I wouldn’t seem as much of a slowpoke.

The Re comes with a fixed-focus lens that’s ideal for subjects four feet to 130 feet from you. Closer up, you’ll notice some blur, even if the subject is still. I got some okay shots of my cousin’s 2-year-old in a New York City playground, but images lacked the sharpness I usually strive for. Also, because of how you hold the device, it’s biased toward horizontal shots.

After the playground visit, we went to a well-lit indoor exhibit. Shots of big things and people came out fine, though finer details, like feathers, looked duller than shots I took with the better cameras in Apple and Samsung phones.

Shots were disappointing in low-light settings, whether outdoors at night or inside a dark restaurant. Part of that comes from the lack of a flash. But many camera phones do better with flashless images – in some cases because their lenses are able to open wider for more light and less blur.

SO WHO SHOULD USE THE RE?

The Re does allow you to watch your kid’s recital or a parade or to talk to your friend eye to eye, without a screen in the way as you try to record the moment.

Because it’s always “on,” it’s quicker than whipping out your phone or camera to snap impromptu fun. I found it was better for video than snapshots, as minor blur doesn’t matter when everything’s moving anyway. And HTC has included technology to minimize camera shake for video, but not yet for stills. Kids seem to gravitate toward the device, not knowing what it does. My cousin’s kid ran around with the Re. It was neat seeing the world through her eyes. It’s also good to have in a pool, as it’s waterproof, unlike most phones.

But the Re is no replacement for a camera phone. It’s more of a supplement for the times you don’t want to hold your phone. You’ll have to decide if that’s worth the price tag.