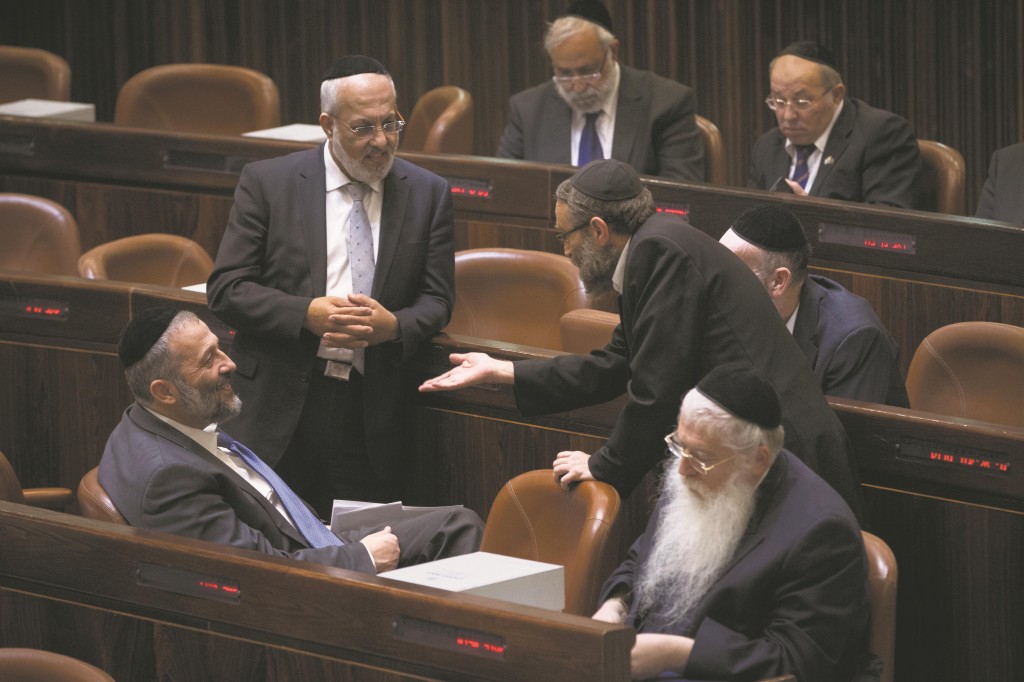 Amid persistent rumors and reports in the secular media that the chareidi parties are considering joining the Netanyahu coalition, leaders of United Torah Judaism and Shas have said that such a move is not on the agenda.

Any change in that position would come only at the direction of Gedolei Torah, party leaders told a conference of chareidi officials and activists during this week’s gathering of elected representatives at the Nir Etzion conference center in the north.

UTJ MK’s Rabbi Yaakov Litzman and Rabbi Moshe Gafni and Shas chairman Aryeh Deri were among those addressing the participants, and they uniformly expressed the above sentiments.

Prime Minister Binyamin Netanyahu — who formed a coalition with Yesh Atid and Jewish Home that excluded chareidim — reportedly has regrets. Instead of the loyal support he had received from the chareidi parties over the past years, he has been plagued by coalition partners who constantly threaten to bolt when their bills are not approved and who openly seek to replace him.

A senior official in one of the coalition parties said on Monday, “Netanyahu wants elections. It’s obvious. He has already understood that the coalition won’t last another year.”

The chareidim are also in demand by opposition parties who are exploring the option of building a center-left coalition that would replace the current government but would keep the existing Knesset composition. Even though it seems improbable that they would lend a hand to such a project, which would feature Yair Lapid (Yesh Atid) in a leading role, a senior official close to Netanyahu insisted it was true, at least as far as overtures from Lapid’s side.

“We have solid, corroborated information on Lapid’s attempts to set up an alternative coalition. We got information from the chareidi factions on overtures to them … Lapid’s denials in the press on this issue are inappropriate,” he told The Times of Israel.

The Israeli media was awash with speculation about a coalition collapse and a call for early elections.

Lapid has been denying threats that he’ll leave the coalition if he doesn’t get his Zero VAT bill passed, but Economy Minister Naftali Bennett was sounding more militant.

On Monday, he effectively issued an ultimatum: “When we joined the government, we demanded and signed an agreement that said they would pass a nation-state law. Yesterday, one of the sides pushed in a one-sided way. The nation-state law will pass this coming Sunday, and if it doesn’t there will be no coalition — because everything will fall apart.”

The bill is now slated for a vote in the Cabinet next Sunday, a decision announced by Netanyahu after Justice Minister Tzipi Livni unexpectedly canceled, mid-session, a ministerial debate on the contentious bill.

But the prime minister had his own surprise in store for Livni. Instead of presenting the bill to the Ministerial Committee for legislation a second time, as Livni wanted, it will go to the cabinet, which has the authority to forward legislation to the plenum for a vote, bypassing the committee altogether.

Meanwhile, as the Knesset work-week opened on Sunday, the coalition dysfunction had contaminated parliamentary operations. Nothing was running, at least in connection with the crucial budget debate.

Knesset Speaker Yuri Edelstein (Yisrael Beiteinu) said that as long as the 2015 state budget was not moving forward, he would not allow Finance Minister Yair Lapid’s Zero VAT proposal to be brought to the plenum for final voting. For his part, Lapid threatened to ditch the coalition and force early elections if he was stymied in the Knesset.

Knesset Finance Committee chairman MK Nissan Slomiansky (Jewish Home) warned at the start of the committee meeting on Monday, in which Finance Minister Yair Lapid presented the 2015 budget, that “we won’t be a rubber stamp to pass the budget.”

“If needed the debate on the budget will continue even into January,” Slomiansky said.

“At the moment, in the face of the security and economic challenges, I would not recommend throwing the state into elections,” he said.

“We hope the coalition and the prime minister will work it out, will find a compromise, because right now the escalation in the statements adds nothing,” Lieberman added.