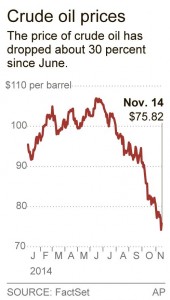 Stocks ended mostly higher on Friday as major indexes extended gains for a fourth week in a row, a rare stretch for this year.

After flitting between tiny gains and losses for most of the day, the Standard and Poor’s 500 index rose just two-hundredths of one percent to close at a record high. The Dow Jones industrial average ended slightly lower, but the losses were limited by a gain in energy shares, which have been falling sharply in recent months as oil prices drop.

Stocks have been mostly rising since Oct. 15, when the S&P 500 nearly fell into a “correction,” a trading term for a drop of 10 percent or more from a recent peak. Generally strong corporate earnings results and solid U.S. economic data have lifted shares sharply since then.

On Friday, investors got more good economic news. The Commerce Department reported that retail sales rose 0.3 percent in October after a drop in September. The reversal, though modest, was interpreted by some market experts as evidence that recent job gains and lower gas prices are lifting spirits as the end-of-the year shopping season begins.

Six of the S&P 500 index’s 10 industry sectors rose, led by an 0.8 percent gain in energy shares. Energy stocks had fallen 10 percent in three months as the price of crude plummeted to a four-year low.

Among the highlights of the day, Virgin America, an airline backed by billionaire Richard Branson, soared 30 percent in its initial public offering.

For the week, the S&P 500 and the Dow closed up about a third of a percentage point, their fourth week of gains. The only better performance this year was a five-week run started in early August.

The price of oil posted its biggest gain in two months on concerns over Libyan output and strong retail sales in the U.S. that raised expectations for demand. Benchmark U.S. crude rose $1.61 to close at $75.82 a barrel on the New York Mercantile Exchange. Brent crude, a benchmark for international oils used by many U.S. refineries, rose $1.92 to $79.41 on the ICE Futures exchange in London.

The price of U.S. government bonds rose slightly. The yield on the 10-year Treasury note slipped to 2.32 percent from 2.34 percent on Thursday. The yield was at 3 percent at the start of the year. Yields move in the opposite direction to the price.