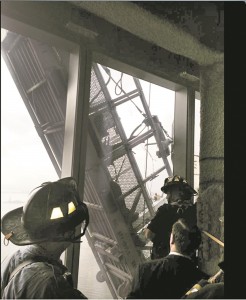 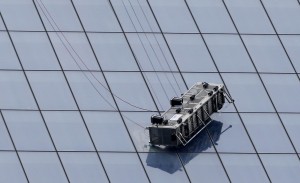 Lower Manhattan came to a halt Wednesday at the sight of two window washers who were trapped as scaffolding dangled at a precarious angle 69 stories up the side of 1 World Trade Center, the nation’s tallest building.

They were rescued two hours later when firefighters used diamond cutters to saw through a two-layered glass window and bring the workers to safety. Fire Commissioner Daniel Nigro said they had mild hypothermia after their dramatic ordeal.

It started around 12:40 p.m., when one of four cables holding the scaffold in the south side of the 1,776-foot, 104-story building developed some slack. The open-topped platform tilted to a 75-degree position and swayed slightly in the wind.

The workers were tethered and communicating with rescuers. People on the ground were moved back in case glass began flying. Office workers and construction workers streamed onto a nearby street, their necks craned upward to watch the scaffold as it is waved in the wind. Dozens of emergency vehicles lined the street.

Carol Thomas and Lisa Cogliano, who both work nearby, were returning to their office from a meeting.

“Oh G-d, I don’t want to know what he is feeling. I can’t imagine,” Thomas said. “It’s horrific,” Cogliano added.

This article appeared in print on page 1 of the November 13th, 2014 edition of Hamodia.