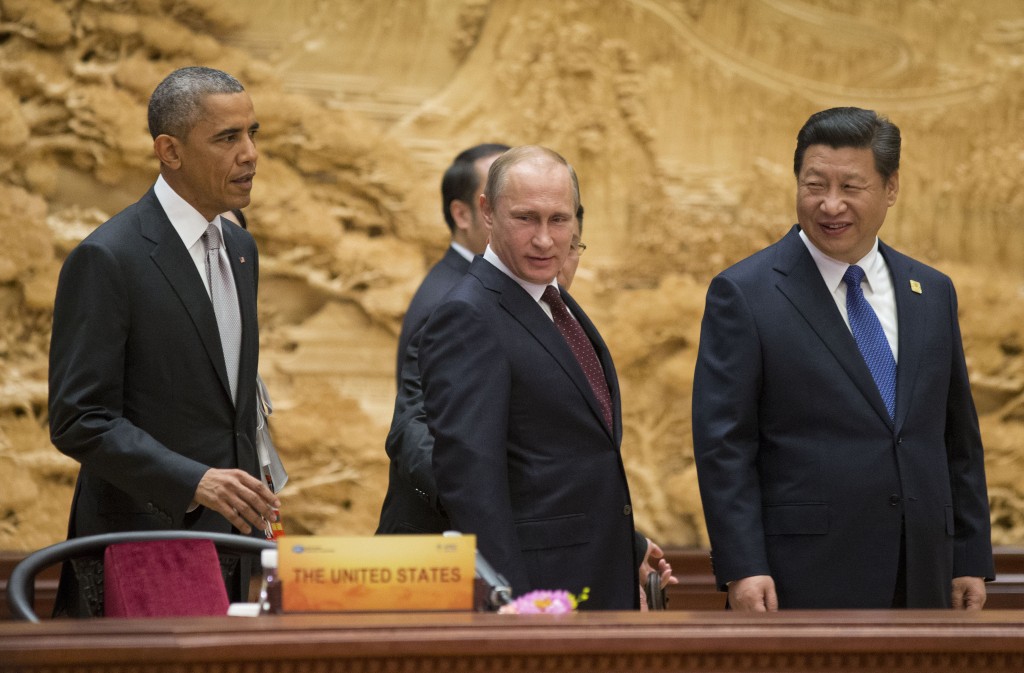 Leaders of Asia-Pacific economies agreed Tuesday to begin work toward possible adoption of a Chinese-backed free-trade pact, giving Beijing a victory in its push for a bigger role in managing global commerce.

In a joint statement after a two-day Asia-Pacific Economic Cooperation summit, the leaders, including U.S. President Barack Obama and Russia’s Vladimir Putin, agreed to take a first step by launching a two-year study of the initiative.

“This is a historic step in the direction of an Asia-Pacific free-trade area,” said Chinese President Xi Jinping at a news conference.

China is promoting the proposed Free-Trade Area of the Asia Pacific despite U.S. pressure to wrap up other trade negotiations. Analysts see it as a response to a U.S.-led initiative, the Trans-Pacific Partnership, which includes 12 countries but excludes China.

The APEC leaders also promised to work more closely to combat official corruption. That is a special concern for Beijing, which is stepping up efforts to pursue officials who flee abroad with stolen public money.

Beijing has launched a series of trade and finance initiatives in pursuit of a bigger role in U.S.-dominated economic and security organizations to reflect Beijing’s status as the world’s second-biggest economy.

APEC was the first major international gathering in China since Xi took power and gave Beijing a platform to lobby for a bigger leadership role.

On the eve of the summit, Beijing announced a free-trade agreement with South Korea. Also Monday, regulators approved a plan to open Chinese stock markets wider to foreign investors by linking exchanges in Hong Kong and Shanghai. That followed the weekend announcement of a $40 billion Chinese-financed fund to improve trade links between Asian economies.

Earlier this year, Beijing launched a regional development bank with 20 other governments. In May, Xi called for a new Asian structure for security cooperation based on a group that includes Russia and Iran but excludes the United States.

China says its motives are benign, but its growing economic weight as the top trading partner for most of its neighbors from South Korea to Australia could erode U.S. influence.

Tuesday’s meeting took place under elaborate security at a government conference center in wooded hills north of the Chinese capital.

In an effort to appear more open, organizers took the unusual step of allowing access from the press center to websites such as Facebook, Twitter and YouTube that usually are blocked by China’s extensive internet filters.

The Asia-Pacific trade pact was first proposed by an APEC business panel, but China took the lead in promoting it. It marks the first time Beijing has played a leading role in a multinational trade agreement.

“(The U.S.-led) TPP is being used to push aside China and to weaken China’s economic core status,” said Wu Xinbo, director of the Center for American Studies at Fudan University in Shanghai. Promoting its own initiative “will give China a bigger right to speak in the Asia-Pacific – to have a new status.”

Obama said Monday the United States “welcomes the rise” of a prosperous, peaceful and stable China. Still, American officials chafe at Beijing’s insistence on promoting the Free-Trade Area of the Asia Pacific.

U.S. trade officials say the two proposals are not competitors. But they want Beijing to wrap up a U.S.-Chinese investment treaty and a separate agreement to lower barriers to trade in information technology. Washington and some other governments argued the Chinese proposal would be a distraction at APEC, but Beijing made it the centerpiece of the meeting.

Few details of the U.S.-led proposal have been released, but promoters say it would reduce or eliminate tariffs on most goods among the member countries. That might hurt China by encouraging member countries to trade more with each other.

Leaders of the nations involved in TPP talks, including the United States, Mexico, Japan and Australia, met Monday and issued a statement saying they were making progress. The talks have been delayed repeatedly by disputes over the sweeping nature of its market-opening proposals.

“We have instructed our ministers and negotiators to make concluding this agreement a top priority,” the statement said.

The initiative promoted by Beijing is less ambitious and is aimed at reducing conflict among overlapping trade agreements between pairs of Asia-Pacific economies.

It is a logical response to being excluded from the TPP, said Li Wei, an economist at the Cheung Kong Graduate School of Business in Beijing.

“If the U.S. doesn’t want China to join the TPP, then China can form its own trade groups,” said Li.

Li also pointed to limits on access to U.S. markets for some Chinese technology companies such as Huawei Technologies Ltd., a maker of network switching gear, on security grounds.

“The world, with the U.S. leading, is retreating from free trade. It is moving into protectionism,” said Li. “If the U.S. is saying, I should be careful about who I have free trade with, then China should take a more liberalizing role.”