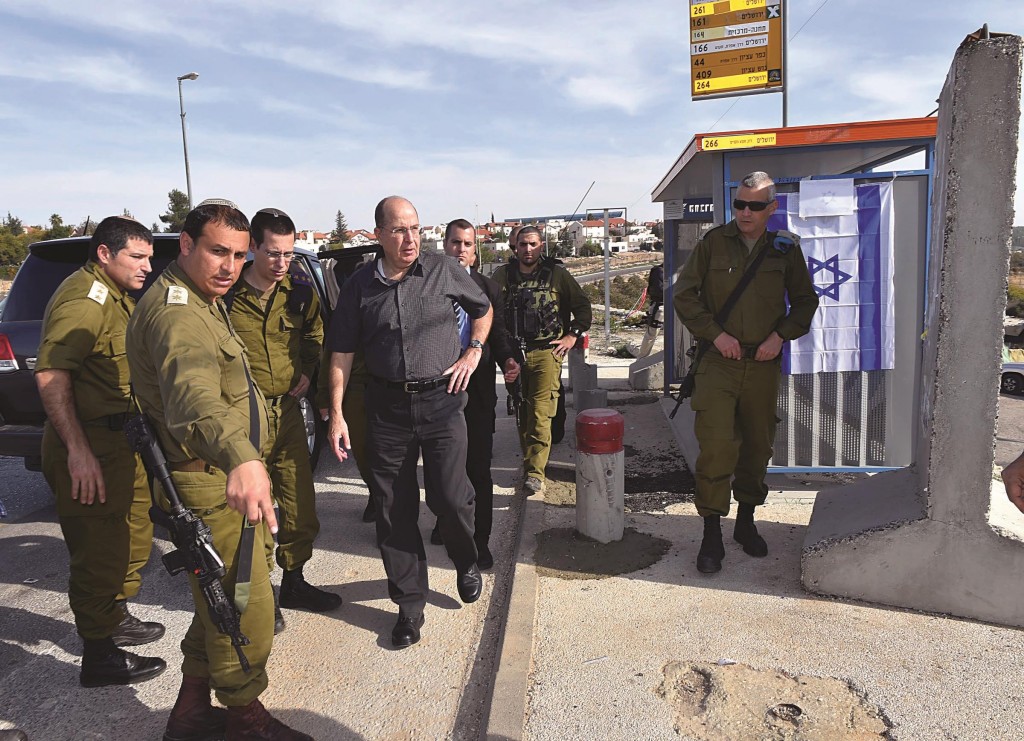 A day after two deadly terrorist attacks, Israel was reinforcing army deployments in Yehudah and Shomron, and bracing for a possible escalation in the violence.

Following the attacks, Prime Minister Binyamin Netanyahu on Tuesday held the first major security briefing with his security cabinet since Operation Protective Edge. Ministers heard a gloomy assessment of the significant prospect of renewed rocket fire from Gaza in the near term.

One of the units dispatched to the region was from the Golani infantry brigade, which had been training in the north.

Security forces must do everything in their power to fight terrorists — and that includes carrying out “shoot to kill” orders when necessary, he said.

Yaalon acknowedged the difficulty of preventing the violent acts of individuals acting on their own initiative, which are highly unpredictable compared with operations directed by higher-ups where intelligence can provide warnings of an impending attack.

“We’re not seeing masses pouring into the street. We’re seeing, in certain places, young people using grassroots terrorism and lone attackers,” Yaalon continued. “What do we call it? Let’s wait and see how it develops. It’s clear there is an escalation.”

One thing which could help prevent terrorist attacks would be a tighter seal on the border crossings to keep Palestinians from entering Israel illegally, he noted. “So we are bolstering our forces accordingly, in an effort to prevent infiltration,” Ayalon said.

Regarding the incitement issuing from the Palestinian Authority, Yaalon mentioned that the PA has in recent days been acting to calm the situation in Yehudah and Shomron, and expressed hope that the inflammatory rhetoric would be reined in.

His comments were at odds with Netanyahu’s expression of “my regret, [that] Mahmoud Abbas is not a partner in this effort. Instead of calming the situation he is inflaming it. Instead of speaking the truth, he is disseminating lies to the effect that we intend, or are operating in some way, to change the status of the holy places — this is a gross lie.”

At the cabinet meeting, Netanyahu appealed directly to Israel’s Arabs: “Do not be swept away by propaganda and incitement. Don’t be swept away by an inflamed minority. You are citizens with equal rights and equal obligations, and the first obligation of any citizen is to respect the law.”

Meanwhile, Israeli troops shot dead a Palestinian armed with an improvised weapon in ongoing violence on Tuesday at Al-Arroub, southwest of Beit Lechem. The soldiers were  under attack by a crowd of some 200 hurling firebombs and rocks.

In Sinjil, near Ramallah, 15 Palestinians threw rocks and firebombs at traffic on a road on Tuesday. The IDF fired bullets at the legs of two attackers, striking and injuring them.