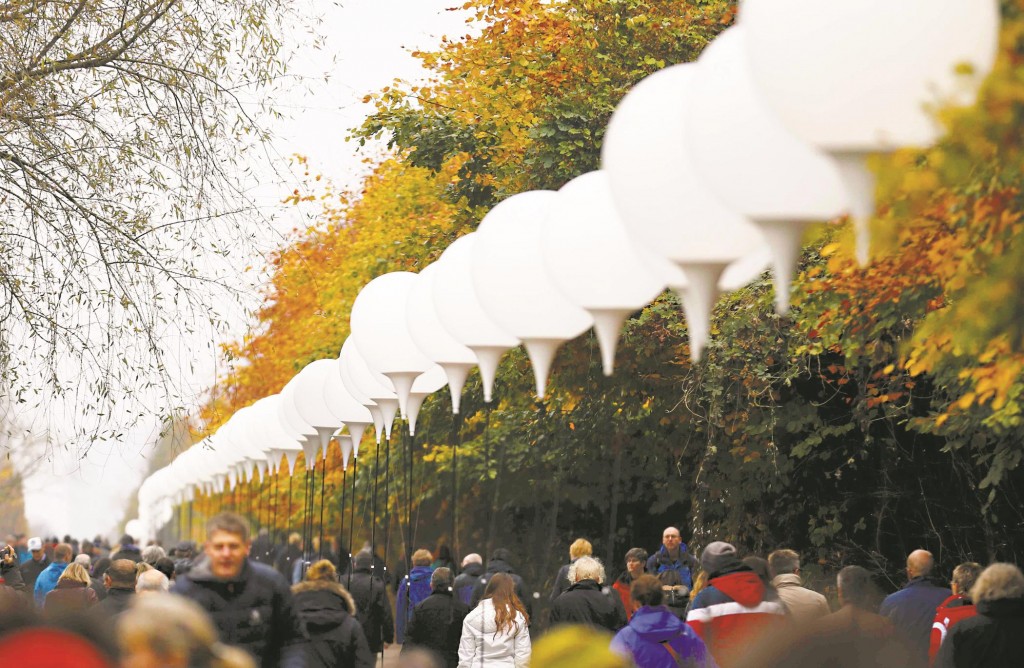 More than a million Germans and other people from around the world on Sunday celebrated the 25th anniversary of the fall of the Berlin Wall, the event that more than any other marked the end of the Cold War.

A spectacular 15-kilometer-long string of 7,000 illuminated helium balloons traced the course of the barrier that once snaked through the city, slicing across streets, between families and even through graveyards.

They were set free one after another into the night sky, symbolizing the breaching of the wall by crowds of protesters in 1989.

“We’re the happiest people in the world and we’re thrilled that you brought the Berlin Wall down 25 years ago,” Berlin’s Mayor Klaus Wowereit said as the first balloons were sent aloft. “Nothing and no one can stand in the way of freedom.”

Festivities to mark the anniversary drew more than one million Berliners and tourists to the heart of the once-divided city. Despite the fog and cold, many wandered along the former “death strip” where the Wall stood and where the illuminated helium balloons forming the “Lichtgrenze,” or Border of Light, were perched 11.8 feet high on poles that matched the height of the barrier built in 1961 by Communist East Germany.

The crowd also cheered when former Soviet leader Mikhail Gorbachev, widely admired in Germany for his role in paving the way for the Wall’s collapse, stood and waved. He ominously warned in a speech in Berlin on Saturday that a new Cold War was looming because of the Ukraine crisis.

Earlier on Sunday, Chancellor Angela Merkel said the fall of the wall showed the world that “dreams can come true” and should inspire people trapped in tyranny everywhere.

Merkel, a young physicist in Communist East Berlin when she got her first taste of freedom on Nov. 9, 1989, said in a speech that the wall’s opening in response to mass popular pressure would be eternally remembered as a triumph of the human spirit.

“The fall of the Berlin Wall showed us that dreams can come true and that nothing has to stay the way it is, no matter how high the hurdles might seem to be,” said Merkel.

“It showed that we have the power to shape our destiny and make things better,” she said, noting that people in Ukraine, Syria, Iraq and elsewhere around the world should feel heartened by the example of the Wall’s sudden demise.

“It was a victory of freedom over bondage.”

But she added the date Nov. 9 bears historical burdens. It was also the day in 1938 of the anti-Jewish pogrom “Kristallnacht,” when Nazis carried out attacks on shuls and Jewish shops across Germany.

The Berlin Wall was built in 1961 to stop East Germans fleeing to the West. It began as a barbed wire and cinderblock wall and was then fortified as a heavily guarded 100-mile white concrete barrier that encircled West Berlin.

Communist regimes collapsed in the face of popular uprisings across Eastern Europe in 1989, signaling the end of the Cold War, of which the Berlin Wall had become the starkest symbol.