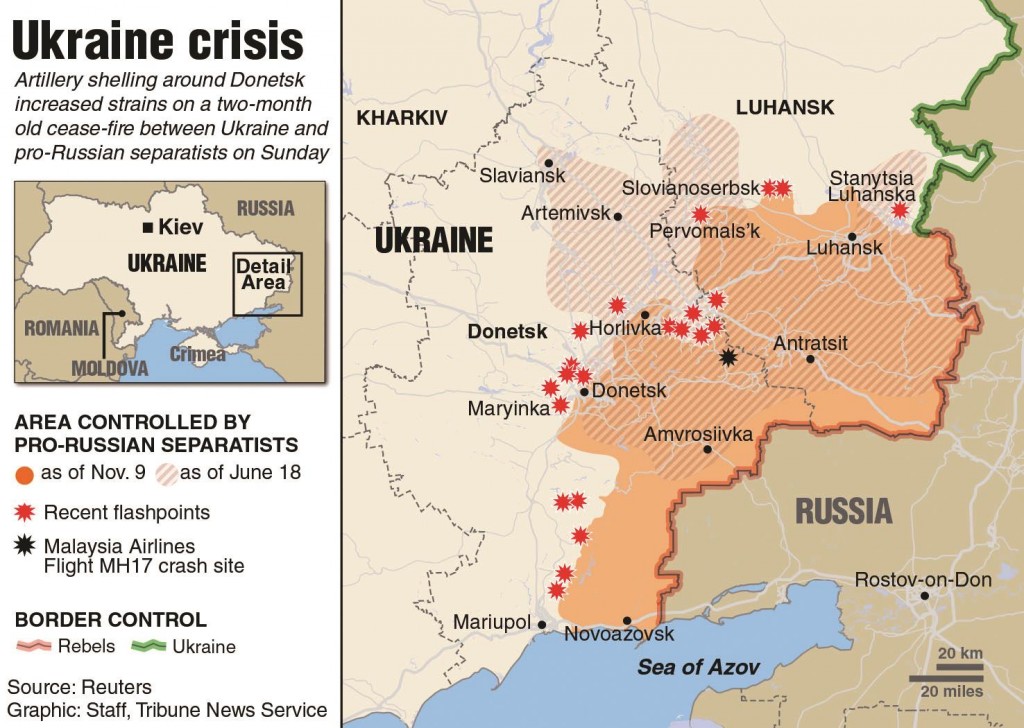 Ukraine’s currency lost nearly 5 percent of its value on Monday after a weekend that saw the heaviest shelling in a month hit the main rebel stronghold in the east and signs that Moscow had dispatched troops and tanks to reinforce separatists.

The prospect that a two-month-old ceasefire could collapse and all-out war return to eastern Ukraine has weighed down the economy and helped drive the currency 12 percent lower since the central bank abandoned an unofficial peg a week ago.

The country of 46 million people is near bankruptcy, dependent on international loans, and deeply in debt for natural gas to Russia, the former imperial master it accuses of waging war on behalf of separatists on its territory.

After fighting over the summer that killed 4,000 people, a truce has largely held between government forces and separatists in the east. But it appears to be fraying in recent days.

Kiev says Moscow has sent an armored column of additional reinforcements to aid the pro-Russian separatists in enclaves populated mainly by Russian-speaking ethnic Ukrainians, which the Kremlin now refers to as “New Russia.”

Moscow denies that its troops have fought in Ukraine, even though many of them have died there.

The Organization for Security and Cooperation in Europe, a body that includes Russia, Ukraine, the United States and Western European countries and operates in east Ukraine with the permission of all sides, confirmed that a column of troops and tanks without insignia had been spotted in rebel held territory.

Reuters reporters in Donetsk, the biggest city in rebel held territory, said sporadic shelling could still be heard on Monday, although not as intense as Sunday when it reached a level unseen since early October.

The artillery fire has come from territory held by both sides, mainly near the ruins of the city’s airport, which is still held by government forces.