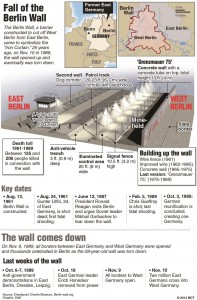 German Chancellor Angela Merkel said on Saturday an irrepressible yearning for freedom brought the Berlin Wall tumbling down 25 years ago and called it a “miracle” that the Cold War barrier was breached without a shot being fired.

Speaking on the eve of Sunday’s celebrations to mark the 25th anniversary of the Berlin Wall’s collapse, Merkel said Germany would always be grateful for the courage of East Germans who took to the streets to protest the Communist dictatorship.

“It was a day that showed us the yearning for freedom cannot be forever suppressed,” Merkel said in a speech in Berlin.

“During the course of 1989 more and more East Germans lost their fears of the state’s repression and chicanery, and went out on the streets. There was no turning back then. It is thanks to their courage the Wall was opened.” In a country with few cheerful anniversaries to celebrate after its belligerent 20th-Century history, Germans have latched onto memories of the peaceful East German revolution that brought down the Berlin Wall on a joyful Nov. 9, 1989.

More than 100,000 Berliners and tourists wandered along a 15-km (9 miles) route in the city center where the Berlin Wall once stood, where 7,000 illuminated balloons were perched 3.6-metres high on poles —matching the height of the Wall.

The artistic display of balloons, which dramatically illustrate how the Wall snaked through the heart of the city, is also porous to enable people to easily move back and forth between the former East and West Berlin. The balloons were released on Sunday night amid celebrations to symbolize the Wall’s disappearance.

Mikhail Gorbachev, the former Soviet leader, warned in a speech in Berlin that East-West tensions over Ukraine recalled the era before the Wall fell. “The world is on the brink of a new Cold War,” 83-year-old Gorbachev said.

“Some say that it has already begun.”

This article appeared in print on page 3 of the November 10th, 2014 edition of Hamodia.