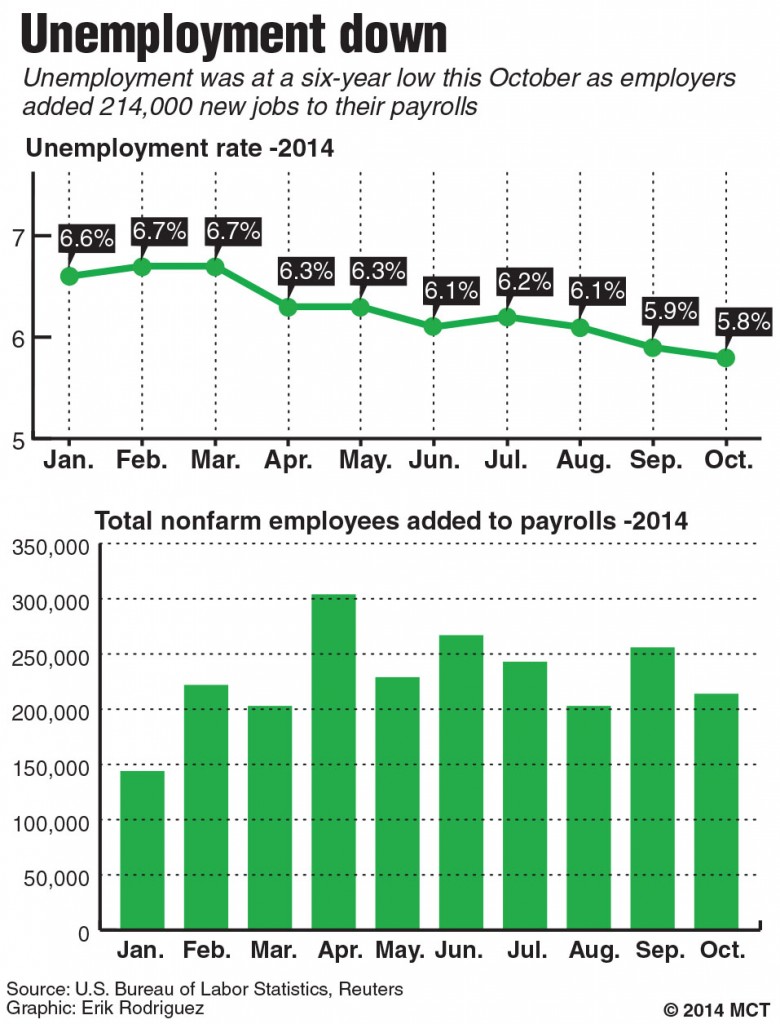 The economy posted another solid, though somewhat disappointing, month of job growth in October, adding 214,000 net new positions while the unemployment rate fell to a post-Great Recession low of 5.8 percent, the Labor Department said Friday.

October’s job gains were down from the previous month’s upwardly revised figure of 256,000 and below economists’ expectations.

But the Labor Department said job growth was slightly stronger in August and September than originally estimated, with 31,000 more positions added.

Those revisions pushed August’s figure to 203,000, meaning the best streak of job creation since the 1990s did not end in the summer, as was originally thought.

With October’s solid growth, the economy now has added more than 200,000 jobs for nine straight months. That’s the best performance since a 19-month streak from 1993-95.

The unemployment rate fell 0.1 percentage points to 5.8 percent, the lowest since July 2008. The drop came as the labor-force participation rate ticked up to 62.8 percent, still historically low.

Wage growth picked up slightly, with average hourly earnings rising three cents to $24.57 in October after being flat the previous month.

Overall, wages were up 2 percent for the 12 months ended in October. That was above the 1.7 percent inflation rate.

Economists had expected the report to show that the economy added 240,000 net new jobs last month and that the unemployment rate held steady at 5.9 percent.

Federal Reserve officials are watching the labor market closely as they try to determine when to start raising their benchmark short-term interest rate.

After job growth picked up sharply this year and the unemployment rate fell faster than expected, central-bank policymakers determined two weeks ago that the economy was strong enough to end another key stimulus program.

The Fed stopped the controversial bond-buying program it began during the 2008 financial crisis and had run off and on for most of the last six years.

The latest round was started in September 2012 and was designed to push down long-term interest rates to help lower the unemployment rate, which was 8.1 percent at the time.

The other major Fed stimulus has been its near-zero-percent short-term interest rate. Continued improvement in the labor market is crucial to the decision about when to start raising the rate, which analysts expect to happen in the middle of next year.