Obama: GOP Had a Good Night 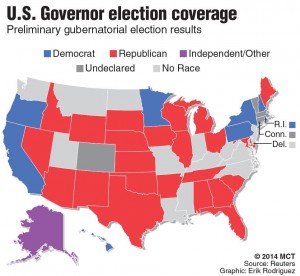 Massachusetts voters sent a Republican back to the statehouse after an election night featuring razor-thin margins and a wave of Republican victories in governors’ races across the United States.

Along with his newly elected Republican counterparts in liberal-leaning Maryland and Illinois, Charlie Baker will have to govern alongside a Democratic-controlled state legislature.

That sets a parallel to Washington, where Republicans picked up control of the U.S. Senate and kept their majority in the House of Representatives, offering a powerful counterweight to Democratic President Barack Obama.

Concerns about the uneven economic recovery appeared to weigh on voters, who elected Republican governors in such political heavyweight states as Florida, Michigan and Wisconsin, as well as Democratic strongholds including Maryland and Illinois.

Baker waited until 16 hours after polls closed to make his acceptance speech and admitted he won by a nose.

New Jersey Governor Chris Christie, who leads the Republican Governors Association but was not up for re-election, said voters rewarded candidates who demonstrated an ability to push through policy priorities.

“They like governors who get things done, and I think you saw that across the country,” Christie, seen as a 2016 White House contender, said in an interview on CNN.

Republicans won more than half the 36 governors’ races on Tuesday.

The governor’s race in Colorado proved one of the few bright spots for the Democrats, with incumbent John Hickenlooper declaring victory on Wednesday.

But observers said splits of that kind at the state level do not necessarily hamstring lawmaking in the way that they could in Washington.

“When you’re governor, you have lots of incentives to try to work things out,” said Shep Melnick, a professor of political science at Boston College.

While Massachusetts is a heavily Democratic state, Baker is the fifth Republican to hold its top office in the past 20 years. He takes over from a Democrat, Deval Patrick, who is finishing up his second term.

The last Massachusetts Republican governor, Mitt Romney, successfully steered a law aimed at providing health insurance to nearly all state residents in 2006, when the legislature was controlled by Democrats.

Connecticut’s result also came late, with businessman Tom Foley conceding on Wednesday that he had lost in a rematch with incumbent Democrat Dannel Malloy.

“Elections are about the future,” Malloy said. “I am really revved up about the next four years.”

In Vermont, incumbent Democrat Peter Shumlin failed to win the support of more than half of voters in a multi-candidate race, which leaves it to the state’s Democratic-controlled legislature to name him as the state’s next governor in January.

This article appeared in print on page 3 of the November 6th, 2014 edition of Hamodia.