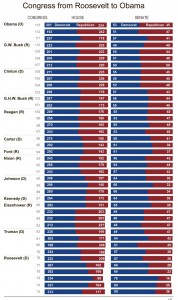 Rising discontent with President Barack Obama produced a Republican-controlled Senate on Tuesday that will join the House in confronting the White House on energy, the environment, health care and other issues for the next two years. The new GOP-led Congress is poised to force Obama repeatedly to choose when to veto, compromise or acquiesce.

The half-dozen new GOP senators who will replace Democrats in the South, Midwest and Rockies have one common bond: They ran campaigns focused almost entirely on attacking the president and a governing style they called both overbearing and aloof.

They offered few specifics of how they might tackle the nation’s biggest problems, such as deficit spending and immigration. It did not matter.

With Senate Democrats now able to turn the filibuster against the Republicans who often used it themselves, it’s unclear whether a GOP-dominated Congress can relieve government gridlock any more than the divided Congress did. Thirty-year Senate veteran Mitch McConnell of Kentucky, in line to be the next majority leader, alternated between defiance and conciliation after defeating Alison Lundergan Grimes and claiming a sixth term.

“For too long, this administration has tried to tell the American people what’s good for them and then blame somebody else when their policies didn’t work out,” McConnell told cheering fans.

He also said that a two-party system “doesn’t mean we have to be in perpetual conflict.”

Republicans had reason to gloat. They ousted Democratic senators in Arkansas, Colorado and North Carolina, and took seats from retiring Democrats in four other states. Equally important, Republicans held off spirited challengers in Kentucky, Georgia and Kansas.

They bid for another in Alaska, where challenger Dan Sullivan led Sen. Mark Begich. Also uncalled was a race in Virginia, where Democratic Sen. Mark Warner faced challenger Ed Gillespie. Louisiana was headed for a Dec. 6 runoff between three-term Democratic Sen. Mary Landrieu and Republican Rep. Bill Cassidy. But the GOP’s majority was assured, regardless of those outcomes.

Sen. Harry Reid of Nevada, returning to the minority after eight years as majority leader, congratulated McConnell and said voters “want us to work together.”

But some Republicans quickly turned their election night comments against likely Democratic presidential candidate Hillary Rodham Clinton, suggesting that the politics of 2016 will complicate the new Congress’ work.

Republicans claimed a huge victory in Colorado, where GOP Rep. Cory Gardner ousted first-term Democrat Mark Udall. The win was notable because Obama had carried Colorado twice, unlike most other states where Republicans made their biggest gains.

In Arkansas, freshman Rep. Tom Cotton knocked off two-term Democratic Sen. Mark Pryor in a state that has veered sharply toward the GOP since native son Bill Clinton left office. Pryor, the last Democrat in Arkansas’ congressional delegation, is the son of a popular former governor and senator. But Arkansas has trended sharply Republican, and Obama lost it by 24 percentage points in 2012.

A rare bright spot for Democrats was Sen. Jeanne Shaheen’s victory in New Hampshire over Scott Brown, a former senator from Massachusetts.

Republicans celebrated Sen. Tim Scott of South Carolina becoming the first black elected to the Senate from a former Confederate state since Reconstruction. He was appointed to the Senate last year, and won a term of his own Tuesday.

This article appeared in print on page 2 of the November 6th, 2014 edition of Hamodia.