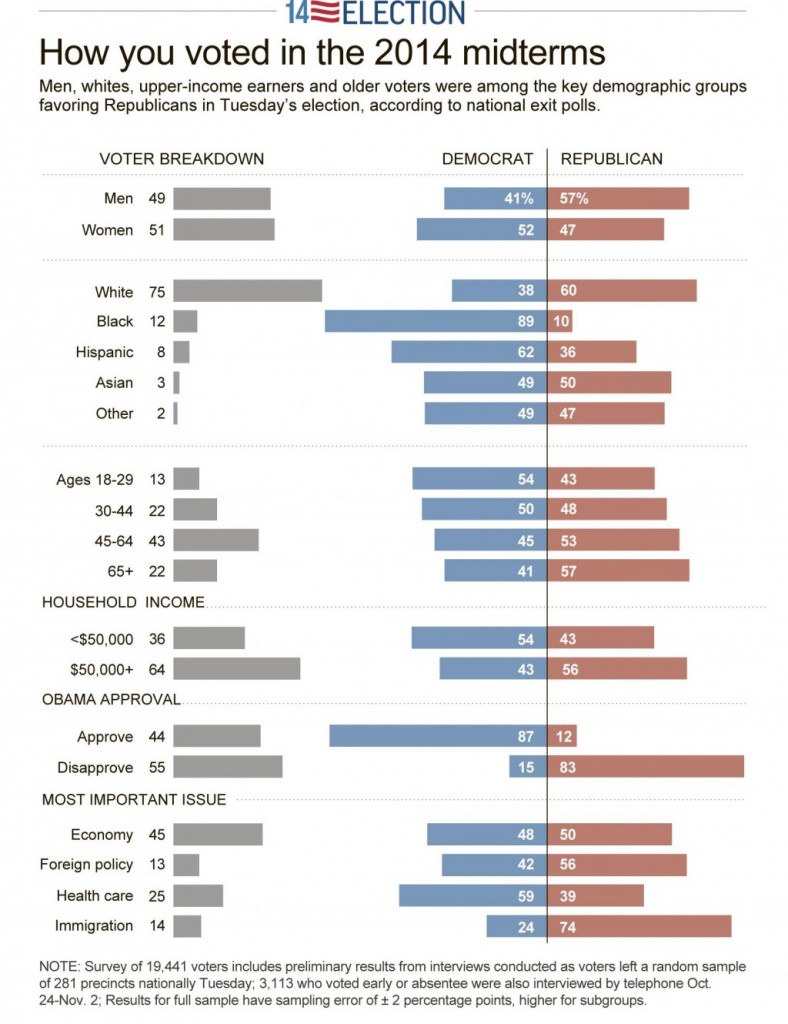 The end of the 2014 midterm elections can mean only one thing: It’s time to launch the 2016 presidential race.

The contest to the White House kicked off Wednesday, two years before voters will decide who succeeds President Barack Obama.

In some ways, the race started months ago, particularly in states — such as Iowa, New Hampshire and South Carolina — that cast the first votes starting in about 14 months in the contests for the Democratic and Republican presidential nominations.

“This is New Hampshire,” quipped Raymond Buckley, the chairman of the New Hampshire Democratic Party. “People started talking about 2016 in 2000.”

A large red, white and blue bus pushing Hillary Clinton for the Democratic nomination has been signing up supporters across the country for months. Prospective Republican candidates have been trying to one-up each other while campaigning for candidates in the midterm elections. And just last week, Ronald Reagan’s presidential library announced that it’s inviting Republican presidential candidates to a debate in September 2015.

Starting earlier and earlier is the new normal. Barack Obama made his first trek to New Hampshire a few weeks after the 2006 midterms, on his way to the 2008 Democratic nomination. One thing that’s very different this time, though, is the way the two major parties view the field.

Clinton, who ran in 2008, dominates the potential Democratic field nationally, as well as in key states. She’s leading by 52 percentage points, according to polls compiled this week by the website RealClearPolitics.

As Clinton puts off a formal decision on running, many of the other potential Democratic candidates — including Vice President Joe Biden, Maryland Gov. Martin O’Malley, New York Gov. Andrew Cuomo and former Sen. Jim Webb of Virginia — are polling in the single digits.

Sheila Charles, an archaeologist in New Hampshire who supported Obama over Clinton in 2008, isn’t sure Clinton’s huge lead will guarantee the nomination. “There’ll be a lot of chatter and debate,” she said. “I don’t think it’s over at all.”

Unlike Democrats, Republican have no clear front-runner and plenty of possible candidates, many of whom were jostling for position Wednesday.

There’s a plethora of governors — Chris Christie of New Jersey, Bobby Jindal of Louisiana, Scott Walker of Wisconsin, Rick Perry of Texas — and one former governor who’s part of a political dynasty, Jeb Bush of Florida, who are interested in the job. Former Arkansas Gov. Mike Huckabee, who ran in 2008, may consider another run.

And there’s a slew of members of Congress among the possible contenders: Paul and fellow Sens. Ted Cruz of Texas and Marco Rubio of Florida, along with Rep. Paul Ryan of Wisconsin, the 2012 vice presidential nominee. Some Republicans are urging Mitt Romney, their party’s unsuccessful nominee in 2012, who’s been a much-sought-after surrogate on the campaign trail this year, to run again.