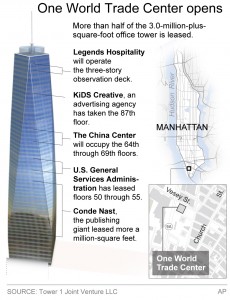 When the people of this city set out to rebuild the World Trade Center after Sept. 11, they planned to erect a lasting memorial, remake the skyline, and restore Lower Manhattan as a financial center.

But when the 104-story One World Trade Center officially opened for business Monday — the tallest and most expensive building in the Western Hemisphere — it ushered in a rebirth of Lower Manhattan as a vibrant, urban neighborhood where people live, shop and eat, rather than just hustle home from white-collar jobs.

While officials and developers battled over final details of the reconstruction in recent years, the neighborhoods around Ground Zero blossomed. Though finance and accounting firms have not returned in any significant way, hordes of condo buyers arrived, attracted by walkable neighborhoods, chic bars and chef-driven restaurants.

The political battles, lawsuits and disagreements behind the reconstruction of One World Trade Center have been well chronicled over the past decade. But the way in which the violent attack on New York City 13 years ago ultimately spawned an urban revival is much less appreciated.

The population in the neighborhood tripled to 60,000. And on Monday, Conde Nast, one of the standard bearers for posh Manhattan, moved into the tower, occupying 1.2 million of its 3 million square feet.

The summer before the attacks, Port Authority officials thought they had largely extracted themselves from the real estate businesses when they agreed to lease the two towers of the previous World Trade Center to private developers for 99 years.

Six weeks later the towers were smoldering rubble, and Lower Manhattan looked like a war zone. The Port Authority, which lost 84 members of its staff in the attacks, still owned the 16 acres of land.

A year later, the developer that had bought the lease, Silverstein Properties, began plotting some 10 million square feet of new offices to replace the twin towers. But the idea that commercial office space should be rebuilt at Ground Zero at all bred early distrust for public officials.

The memories of what happened that day were still so raw. For years, rescue and construction workers continued to find body parts there, each a reminder that the site still held the remains of many of the nearly 2,800 people that died there, hundreds of whom were never found.

Ultimately, the National September 11 Memorial and Museum was built, making most families at peace with the glass-skinned office building coming out of the ground next door.

Still, no-one would have moved into the building had they feared the new tower wouldn’t be safer than the old ones.

After consulting with the FBI and local police forces, architects added a 20-story fortress-like base of concrete and steel that contains mostly building systems and a few offices.

The perimeter is comprised of 24 steel columns, each 60 feet long and weighing 70 tons. A concrete core more than three feet thick encases its elevators and stairwells. In all, it includes 45,000 tons of structural steel and 208,000 cubic yards of concrete, much of it four times stronger than what is typically used in sidewalks.

“One of the things that was most salient was that it was built at a time when we had to move past the current building codes,” said T.J. Gottesdiener, managing partner of SOM’s New York office. “In this era of safety, fighting fires and evacuating occupants had a different meaning to it.”

Patrick Foye, executive director of the Port Authority, called the building “the most secure office building in America.” The final price tag for redevelopment of Ground Zero, including a transit center scheduled to open next spring, could reach $20 billion.

Chuck Townsend, chief executive of Conde Nast, said “there is a great deal of pride” in being the largest renter at One World Trade. He likened the company’s move to its relocation 15 years ago into Times Square, known at the time more for pawn shops than high-end offices.

“We pioneered Times Square and I’m telling you it was no jewel at that time,” he said. “In a way, it was a much more challenging move than moving into this well-developed, well-cultivated neighborhood where there are beautiful offices and residential buildings and a gorgeous park and a wonderful memorial.”

“This was an area that was quiet, where people had gone home after around 6 o’clock. Now this is probably one of the most attractive parts of Manhattan for people to be, and I think companies are recognizing that,” said Foye.

This article appeared in print on page 1 of the November 5th, 2014 edition of Hamodia.