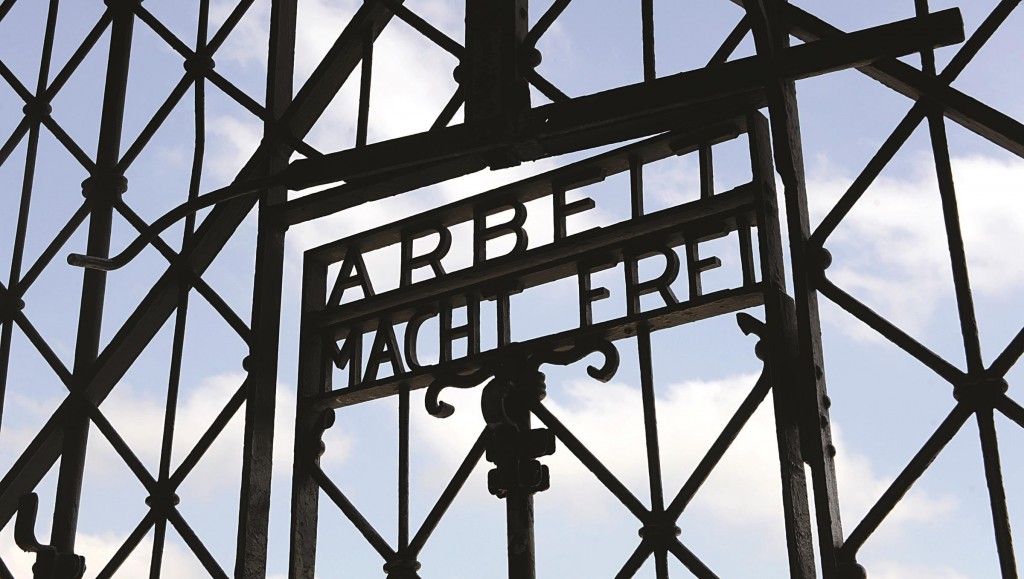 A wrought-iron gate bearing three seemingly inoffensive words, it has become over the course of time a  symbol of unadulterated evil. Even in a world gone mad, when infamy is celebrated and condoned, the notion that someone should want to steal the “Arbeit macht frei” gate from a concentration camp is perplexing.

It is difficult, if not impossible, for those of sane reasoning to plumb the depths of a twisted, malevolent mind and try to understand what it seeks to accomplish.

Five years ago, the infamous “Arbeit macht frei” sign that spanned the main gate of the Auschwitz death camp was stolen. Police found it three days later cut into pieces in a forest on the other side of Poland.

Swedish neo-Nazi leader Anders Hogstrom was found guilty of instigating that theft and was jailed in his homeland. Five Poles also were convicted of involvement and were imprisoned.

On Sunday, German police revealed that the “Arbeit macht frei” gate at the Dachau concentration camp was missing.  It measures 190 by 95 centimeters (75 by 37 inches) and is set into a larger iron gate; whoever stole it during the night would have had to climb over another gate to reach it.

Do the culprits think that stealing this sign will aid in their attempts to try to deny the murder of six million Jews during the Holocaust? Do these fiends plan to use the sign — or perhaps the publicity it generates — to send a message that neo-Nazism, along with its dangerous and nefarious agenda, is alive and well?

Regardless of the precise intent, this malicious act was almost certainly intended to desecrate the memory of the victims and hurt the feelings of the remaining survivors and their children.

The news of the latest theft elicited the predictable and appropriate round of strong condemnations by politicians and Jewish activists, as well as calls for tighter security at the site.

But this incident should also serve as a call to our community  to reflect about what we are doing to keep alive the memory of the Kedoshim — most of whom never merited to be brought to kever Yisrael. The stolen gate was a symbol for the forces of evil, but it is up to us to ensure that there exists in our shuls, schools, homes, and hearts, eternal memorials for the pure and righteous souls of their victims.

Whether this piece of wrought-iron gate from Dachau will be retrieved by local police remains to be seen. Far more important is to emphasize efforts at Holocaust education within our community that tells the story of the Holocaust and stresses the mesirus nefesh of the Kedoshim, and to learn Torah and do mitzvos in their memory.