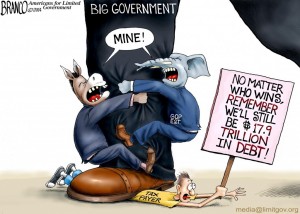 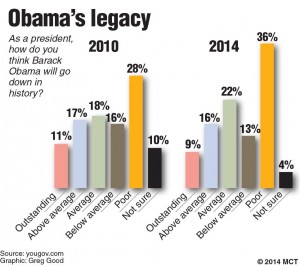 While Hamodia goes to print before election results are in, here are the leading races and issues that were decided in Tuesday’s midterm elections, the final ones of Democrat Barack Obama’s presidency and what is shaping up to be the worst outcome for any president since 1950.

Will Republicans Gain Control of the Senate?

The burning question of the day may not be answered by Wednesday, since it depends on the outcome of several tight races that will probably have runoffs.

The Democrats have long given up hope of winning back the House this year. By Monday, it appeared the Senate might be slipping from the Democrats’ grasp as well, entering the 2016 presidential race hobbled by a resurgent GOP.

In all, there are 13 states where Senate seats might change from one party to the other. Republicans need to win nine of them to attain a 51-seat majority in the Senate for the first time since 2007.

Republicans were leading, by a lot or by a little, in eight of those races.

If the GOP wins all those states, they will need just one more win — one of the toss-up races in Alaska and Kansas, or perhaps the runoff race that’s expected in Louisiana.

The campaign for control of the Senate began last spring, and an estimated $423 million was spent to air 878,000 media spots. Republicans largely campaigned against Obama, which worked since most Democrats were seen as eager to run as centrists skeptical of the president. In Alaska, Sen. Mark Begich (D) proudly declared himself “a thorn” in Obama’s side.

Some complications include Georgia and Louisiana, where laws require that a runoff election be held weeks later if no candidate wins a majority. That currently seems likely to happen. Polls show the Republican leading in runoffs in both states.

And in Kansas, independent Senate candidate Greg Orman hasn’t said whether he would caucus with Republicans or Democrats if he defeats Sen. Pat Roberts (R).

Can Democrats Topple a Giant in Kentucky?

Kentucky has seen one of the year’s most costly and fierce Senate races. From the start, Democrat Alison Lundergan Grimes faced a steep climb in trying to unseat five-term Sen. Mitch McConnell, the chamber’s Republican leader who would become majority leader if his party takes control.

Pundits like to cite McConnell’s relatively low popularity in Kentucky. But that ignores the extreme unlikeliness of Grimes getting votes from conservatives who find McConnell too accommodating and moderate. Obama lost Kentucky by a whopping 23 percentage points. A Grimes victory would rank among the greatest upsets in modern politics.

Another Senate race drawing attention is in New Hampshire, where Democrats have always assumed incumbent Jeanne Shaheen would hold off Republican Scott Brown, a former senator from Massachusetts. But some polls show Brown having closed the gaps in the last few weeks. If Brown wins, or even loses by a small margin, it’s a worrisome sign for Democrats.

North Carolina is one of the nation’s most closely divided states politically. Aside from Indiana, where Obama hardly tried in 2012, it’s the only state he won once and lost once. First-term Democrat Kay Hagan proudly calls herself the Senate’s most middle-of-the-road member. But GOP challenger Thom Tillis, speaker of the state House, has led in many polls, hammering away at Hagan’s vote for Obamacare.

The party in control of the Statehouses is probably more relevant to the average citizen than what goes on in Congress or even the White House. It is governors and state legislatures who decide on laws that affect the daily living of residents, taxes, sanitation and public safety.

Politically as well, a candidate running for president in two years would gain a few percentage points in votes just by having a governor of his own party campaign with him. Not to mention the boost in fundraising.

Right now, there are 29 Republicans and 21 Democrats that hold the office of governor. On Tuesday, there were gubernatorial elections in 36 states, and Republicans seem likely to win several more. Incumbents are safe in 25 of the races, while among the 11 rated as toss-ups, Republicans are incumbents in seven of them and Democrats in the other four.

One surprise is Republican Charlie Baker’s closing the wide lead that Democrat Martha Coakley had in Massachusetts’s open gubernatorial race. Other closely watched races are the one in Wisconsin, where Republican presidential aspirant Gov. Scott Walker is in a dead heat, and in Georgia, where Republican Gov. Nathan Deal faces Democrat Jason Carter, a grandson of the former president.

Florida is probably the biggest governor’s race in the country. Republican Gov. Rick Scott faces former Gov. Charlie Crist, who served in that office as a Republican from 2007 to 2011 but now is a Democrat. The two have been virtually tied in the polls for months. Democrats would really like Crist to win, if for no other reason than they wield little power in Florida. Neither candidate is popular, though.

State Legislatures Are Where the Power Is

Republicans also hold a majority of state legislatures, and have set a goal of controlling a whopping 3/4 of the 50 state bodies by the end of Tuesday. That will help them set the agenda on issues such as taxes, regulations, and moral issues.

There are 99 legislative chambers in the nation — two per state, except for Nebraska which only has one. The GOP controls 59 of them and is seeking to hold 66, which would be a modern-day record.

Republicans control both chambers in 27 states, plus Nebraska’s unicameral, nonpartisan body. This number includes 24 states where there is also a GOP governor, giving the party full power. Democrats control 17 legislatures, including 13 with governorships.

There are five split legislatures, including New York, where the Democrats control the Assembly and the Republicans have a majority in the Senate.

About 15 chambers in 14 states could see a change of control in either direction.

If Republicans Win the Senate, What Will Happen Then?

Not a lot, in the grand scheme of things. Republicans will take over the chamber’s committee chairmanships, and Sen. Mitch McConnell will become majority leader assuming he wins reelection. But many bills require 60 votes, and Obama has the power to veto legislation.

However, Republicans could use the majority to hold hearings on Obama scandals such as Benghazi, the IRS and Ebola — which Democrats have held off until now. They would also be in position to block Obama’s appointments and proposals over the next two years, such as on climate change.

How Much Can Republicans Pad Their House Majority?

The GOP currently holds 233 of 435 seats, but with Obama’s abysmal approval ratings, Republicans could hit their post-World War II high water mark of 246.

Days before the election, some two dozen Democrats are endangered while just four Republicans are vulnerable.

This article appeared in print on page 1 of the November 5th, 2014 edition of Hamodia.