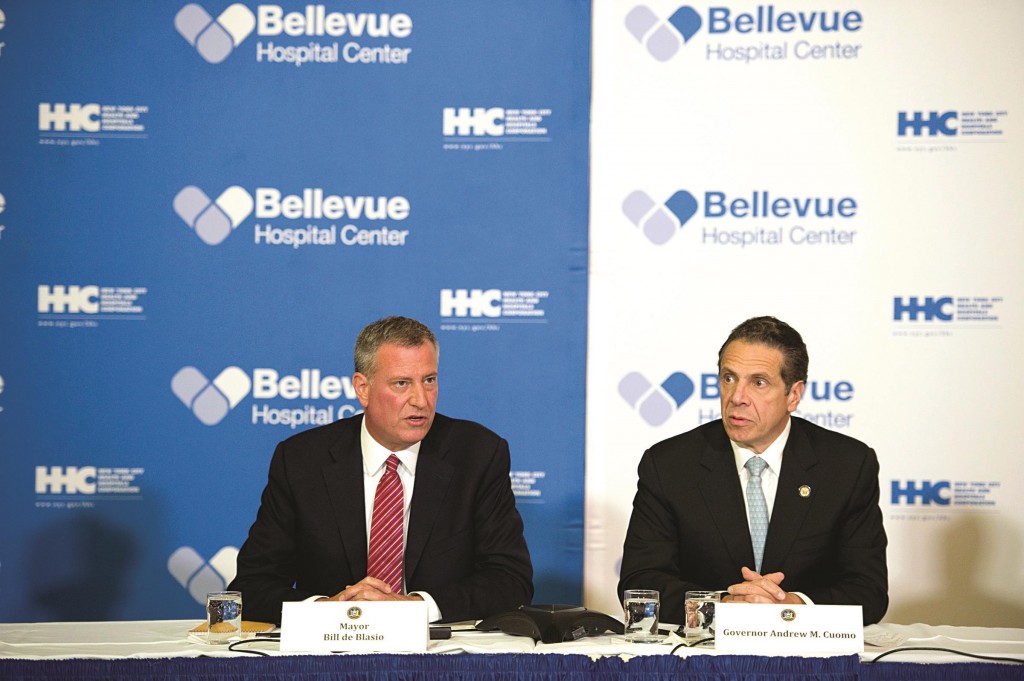 Within hours of New York City’s first confirmed Ebola case, Mayor Bill de Blasio made a point of following in the patient’s footsteps: riding the subways, eating at a restaurant, even visiting the hospital’s isolation chamber.

De Blasio’s actions in the first week of the city’s Ebola crisis were aimed at calming a jittery New York, the result of what administration officials say was a studied, carefully planned strategy put in place weeks before.

That game plan — to make frequent public appearances, to calmly repeat how difficult it is to catch the disease and to stress how prepared the city is — has apparently worked. De Blasio has received high marks from experts who applauded his consistency, which stood in sharp contrast to the rhetoric of the region’s two governors.

“This is what you really pay a mayor to do,” said Bill Cunningham, former communications director for Mayor Michael Bloomberg. “Do we want him to pick up garbage and shovel the snow? Of course. But it’s times like this when the public gets a real image of their mayor.”

The de Blasio administration had spent months preparing and selected the morning of Oct. 23 to practice what would happen were there a diagnosis in the nation’s largest city. After the drill, the command center was supposed to shut down. It never did.

An ambulance was summoned that morning to the Harlem apartment of Dr. Craig Spencer, who had recently returned from treating Ebola-stricken patients in Guinea. Though there had been other false alarms in the previous weeks, Spencer was quickly assessed as a high risk to have the disease.

Results from an Ebola test take more than six hours to complete, and in the interim, de Blasio dashed to a Queens hospital where a police officer was recovering from a hatchet attack and then to a union gathering in the Bronx. He was there when the call came confirming the diagnosis.

That night at Bellevue Hospital Center, flanked by Gov. Andrew Cuomo and city Health Commissioner Mary Bassett, de Blasio stressed that “there is no reason for New Yorkers to be alarmed.”

The plan went awry the next afternoon. Shortly before 5 p.m., the phones started ringing in the mayor’s press office with reporters asking about the new quarantine policy just announced by Cuomo and New Jersey Gov. Chris Christie. Confused, City Hall staff quickly checked the news and found that the governors had announced a stricter policy at the area’s airports and had not informed the mayor’s staff.

Moreover, Cuomo had done a turnaround from his measured tones the night before, criticizing Spencer’s movements and claiming that “hundreds and hundreds” of people could be infected by riding on a bus.

A series of angry phone calls between the governor’s and mayor’s staffs soon followed. Frustrated, the de Blasio team opted to double down on the strategy to calm the public and scheduled the mayor’s lunch at The Meatball Shop the next day.

After enduring a weekend of criticism, Cuomo scheduled a news conference to fill in the details of the policy. There was debate within the de Blasio camp as to whether the mayor should appear with him “to bail out” the governor as he softened his tone.

After the event, a few members of De Blasio’s staff reveled in a moment of calm.

It would not last. The next morning, a 5-year-old was taken to Bellevue with Ebola-like symptoms and the operation sprung to life again. But hours later, the boy was cleared.

“Thank G-d, this young boy is Ebola-free” de Blasio said. “That is a very good piece of news for all of us.”