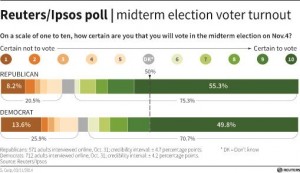 “The spending, the borrowing, the taxing, the overregulation, the slow growth. … These people need to be stopped,” Sen. Mitch McConnell of Kentucky said of the Democrats on Monday, urging voters to support him and GOP candidates everywhere. He would be in line to control the Senate agenda as majority leader if the GOP wins on Tuesday.

Democrats weighed down by Obama’s unpopularity kept their distance from him and looked to a costly turn-out-the-vote operation in the most competitive Senate races to save their seats and their majority.

The cost of the campaign climbed toward $4 billion, and there seemed no end to the attack ads — or to the requests for donations keep them on the air.

“Soon your inbox won’t be crowded with campaign emails — that’s a relief!” said a message from the National Republican Senatorial Committee. Then: a request for “just $25, $50, $100 or anything you’re able to give. …”

All 435 House seats are on Tuesday’s ballot, and not even Democrats predicted they would be able to take control away from the Republicans. Instead, they concentrated on protecting their incumbents, a strategy that meant tacitly conceding races in Utah, New York and North Carolina where retirements created opportunities for Republicans to pad their majority.

“Not one of our incumbents is down or out,” said New York Rep. Steve Israel, who heads the Democrats’ campaign organization.

The lack of suspense about the House made control of the Senate the election’s main prize.

Republicans need a gain of six seats to capture the majority. They were all but assured of winning Democratic-held seats in West Virginia, Montana and South Dakota, and Democrats held out little hope that Sen. Mark Pryor of Arkansas could win re-election.

Polls suggested that races in Iowa, Colorado and Alaska tilted the Republicans’ way, too — although Democrats said their get-out-the-vote operation made any predictions unreliable.

There were competitive races in New Hampshire and in North Carolina where Democrats said they had an edge.

Strategists in both parties said Louisiana and Georgia were both likely headed for runoffs, the first in December and the second in January.

The wildest wild card of all was in Kansas, where polls said 78-year-old Republican Sen. Pat Roberts was in a close race with independent Greg Orman.

The uncertainties meant there was a strong possibility that neither party would be able to claim a Senate majority by the morning after Election Day.

Early voting topped 18 million ballots in 32 states, and both parties seized on the number as evidence of their own strength.

• President Obama was back at the White House after making his final campaign appearances over the weekend. He raised tens of millions of dollars over two years for Democratic candidates, but in the races’ final days most members of his party opted not to appear in public with him because of his poor approval ratings.

• 2016 presidential hopefuls were wrapping up their campaign duties. Sen. Rand Paul was with McConnell. Former Sen. Rick Santorum was with conservative House members..

This article appeared in print on page 1 of the November 4th, 2014 edition of Hamodia.