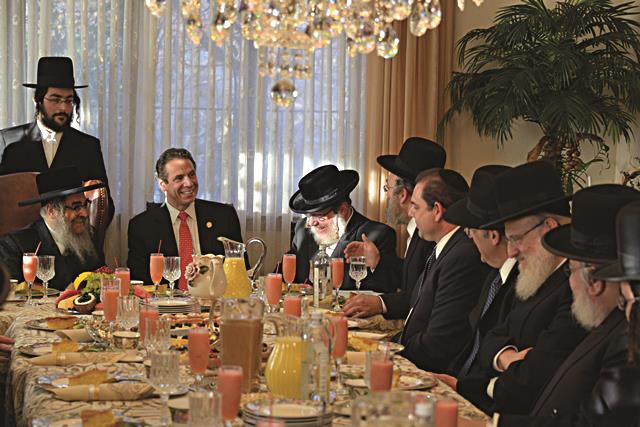 “Their politics is about dividing people,” Cuomo said, rallying supporters Monday in Times Square alongside Schneiderman, DiNapoli and former Buffalo congresswoman Kathy Hochul, the candidate for lieutenant governor. “You can try that division somewhere else, but it’s not going to work in New York.”

Astorino and his running mate, Chemung County Sheriff Chris Moss, are hoping low turnout by Democrats and discontent with the economy will deliver a huge upset.

“He’s panicked,” Astorino told Fox 5 News. “He really feels we can win this race tomorrow. I think he feels it slipping away just like it did in 1994 with his father when nobody thought his father could lose.”

Contests for the U.S. House and the state Senate are hard to gauge since some of the nation’s most competitive races are in New York. Democrats already control the state Assembly. Republicans who now run the 63-member Senate, thanks to an unusual power-sharing agreement with a breakaway faction of Democrats, are hoping to win an outright majority.

Republicans warn that control by Democrats would hurt the economy, and in the past year have stopped Democrat bills to expand Roe v. Wade, raise the minimum wage, and extend tuition aid to illegals. They have also been the force behind a slew of yeshivah-friendly legislation such as the historic Tuition Assistance Program for beis medrash-age bachurim, seminary girls, and kollel yungeleit, and free transportation for late-homecoming yeshivah students.

Stefanik, 30, is trying to become the youngest woman of either party ever elected to Congress. Woolf’s fight to win in this traditional Republican stronghold could be made more difficult by the Green Party’s Matt Funiciello, who has polled strongly for a third-party candidate.

Grimm May Be Indicted But He Has 19-Point Lead

Democrats hope that Rep. Michael Grimm’s legal troubles will help challenger Domenic Recchia win a seat in Staten Island and part of Brooklyn. But voters in the Republican-leaning district are inclined to keep the two-term congressman in office.

“Early on,” said pollster Steven Greenberg, “this race looked like it was going to be one of the closest in the state. … That no longer seems to be the case.”

Grimm was endorsed Saturday by the Staten Island Advance, the district’s leading newspaper.

“On one side is the sometimes hot-headed Republican incumbent who is facing a 20-count federal indictment,” the Advance’s editorial board wrote. “On the other is a career Brooklyn Democratic pol, who, term-limited out of his high-ranking post in the City Council, thought about other city offices before he settled on the idea of the job representing in Congress a borough he knows little about, his claims of deep ties here notwithstanding.”

Grimm, a former Marine and FBI agent, is accused of evading taxes by hiding more than $1 million in sales and wages while running a small Manhattan restaurant. He has pleaded not guilty to 20 counts and awaits a 2015 trial.

The latest poll shows Zeldin getting increasing support from independents and third-party voters. Bishop, a six-term lawmaker, has survived repeated attempts by Republicans to turn him out of office. If elected, Zeldin, an Army veteran who served in Iraq, would be the only Jewish Republican in the House.

In the lower Hudson Valley, in a district including Kiryas Joel, Republican Nan Hayworth is battling to retake the seat she lost two years ago to Democrat Rep. Sean Patrick Maloney. The race is one of only 22 tossups from across the country.

Two-term Republican Rep. Chris Gibson is facing a well-financed challenge in eastern New York from first-time candidate Sean Eldridge, who pumped $1.84 million of his own money into the race. Republicans have tried to turn Eldridge’s wealth and out-of-area roots against him.

There are three propositions on the reverse of the ballot.

The first would authorize a new commission to handle the once-a-decade task of drawing legislative districts, a proposal that critics say falls short of making the process independent of party politics.

The second would allow amending the state constitution to do away with a requirement for legislation to be printed on paper, allowing lawmakers to join the digital age and clear their desks of thick stacks of bills.

The third would authorize the state to borrow $2 billion for school districts to buy computers, connect to the internet, improve security and build classrooms for prekindergarten students.

New Jersey voters will decide whether to send a new senator back to Washington for a full term and choose their members of the House of Representatives in Tuesday’s elections.

Atop the ballot is the U.S. Senate race between incumbent Democrat Cory Booker, who has been in office a year filling the expired term of the late Frank Lautenberg, and Republican challenger Jeff Bell. A Bell victory would be the first for a Republican U.S. Senate candidate in the state since 1972.

All 12 House seats are up, and it’s expected that none of them will be controlled by a different party after the election. Currently, Republicans and Democrats each hold six.

The two ballot measure that would get rid of the state’s right to bail is presented as part of a larger overhaul intended to make it easier for judges to keep suspects who are considered dangerous in jail while awaiting trial, while letting lower-level suspects go free without paying. There hasn’t been much organized opposition, but some critics worry about giving too much power to the court system.

The other proposed amendment to the state constitution would dedicate a portion of the state’s corporate business tax to open space preservation — and increase the amount starting in 2019. Some environmentalists say that would take money away from other environmental projects, while some conservatives say the cause should not be a priority.