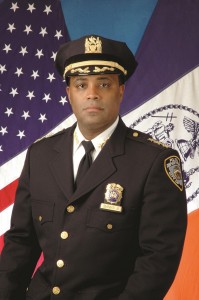 The NYPD’s highest-ranking black official abruptly quit Friday instead of taking a new post, a surprising move that caught city officials off guard at a time when the department is trying to mend relationships with minority communities.

Chief Philip Banks III was to have been named first deputy commissioner, second in command to Chief William Bratton. Bratton had already announced the change and Banks was to have been promoted Monday. Instead, he will retire.

It wasn’t clear why Banks changed his mind, and Bratton cited only “personal and professional factors.” The position was seen under the previous commissioner as largely ceremonial and stripped of power. Bratton said the job had been highly important during his previous stint as commissioner in the 1990s and remains so.

“That is the most significant position in the New York Police Department outside of commissioner,” he said, adding the position would have had expanded duties. Those would have included drawing on Banks’ experience as chief of community affairs to help rebuild trust with minority communities following the department’s controversy over the practice known as stop and frisk. He also said Banks would have helped in personal development and training.

“I think the world of Chief Banks. He’s been a very able and capable partner,” Bratton said.

Banks, 51, took over as chief of department in March 2013 under former Commissioner Raymond Kelly. He’s been with the department since 1986 and has worked as the commanding officer of a Manhattan patrol borough, and several precincts. He had been mentioned as a possible successor to Ray Kelly before Bratton was selected.

The retirement comes at a time when Mayor Bill de Blasio’s relationship with the department is strained over accusations he sided with frequent NYPD critic Al Sharpton.

Some blacks activists have said his replacement, which will be announced Wednesday, should be black or Latino. But Sharpton said at his weekly rally Saturday that he doesn’t just want blacks and Latinos in senior positions, he wants “the right blacks and Latinos.”