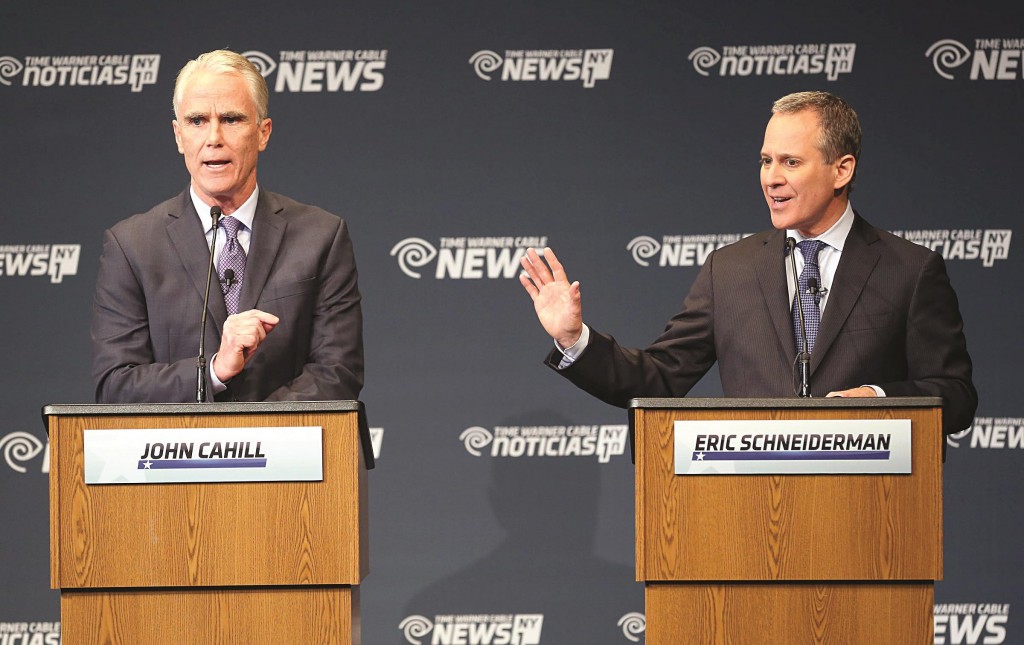 The two major-party candidates for New York attorney general clashed over corruption and integrity in a feisty debate Thursday night just days before voters head to the polls.

The live broadcast exchange saw Attorney General Eric Schneiderman, a Democrat, and Republican John Cahill often yelling over each other, with Cahill arguing Schneiderman is using the office as a springboard to a run for governor and Schneiderman saying Cahill lacks the vision to serve as the state’s top law-enforcement official.

“Did you read the bill before you put out your press release?” Cahill asked Schneiderman, referring to his support for a gun-control measure.

Schneiderman, a former state senator elected attorney general in 2010, dismissed Cahill’s allegations and cited his work to prosecute more than 50 people connected to corruption cases. He also noted that he helped make major banks pay $60 billion for their roles in the 2008 financial crisis, including $4 billion to help New York and its distressed homeowners.

The two also sparred over the Moreland anti-corruption commission created — and then abruptly dismantled — by Gov. Andrew Cuomo. Cahill said Schneiderman blew an opportunity to address corruption; Schneiderman said the commission was independent.

The Republican challenger demanded that Schneiderman answer whether he intends to run for governor, pledging that he himself would not seek higher office if elected. Schneiderman didn’t rule it out, but said he is focused on his current office.

“I would appreciate a little more respect John,” Schneiderman said during one particularly combative exchange.

Polls show Schneiderman is significantly ahead of Cahill.

A round of quick yes/no questions added some humor to the debate. Asked if they’ve ever taken a Buzzfeed quiz — those often frivolous online quizzes — Schneiderman sheepishly said that he had. Cahill’s response: “A what?”