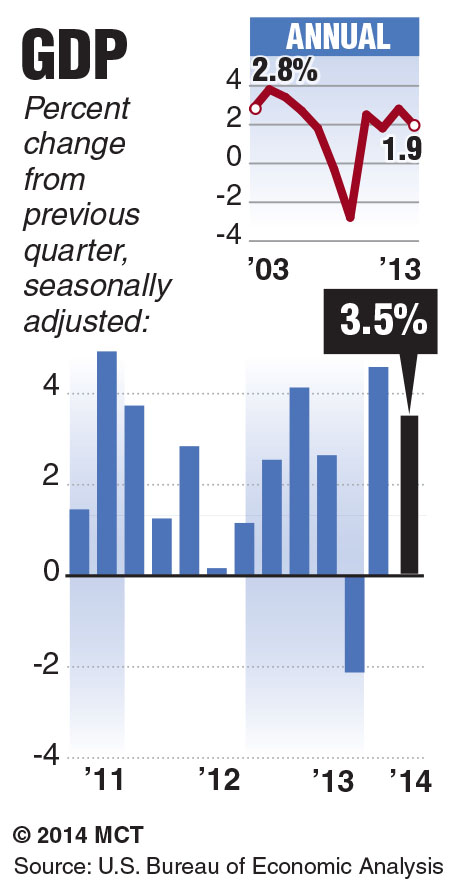 The U.S. economy expanded at a solid pace in the third quarter, beating expectations and adding a little more momentum in the face of increased risks from slower global growth and heightened uncertainty in financial markets.

The nation’s gross domestic product, the total value of the goods and services produced, increased at a 3.5 percent annual rate in the July-to-September period, the Commerce Department said Thursday. That is the change from the second quarter, when real GDP bounced up to an annual pace of 4.6 percent after a brutal winter brought a 2.1 percent contraction in output at the start of the year.

All in all, the latest report confirms that the U.S. economy is on more solid footing and is far outperforming the economies of other major advanced nations such as Japan, Germany and France. It validates the Federal Reserve’s announcement Wednesday that the U.S. recovery was strong enough for the central bank to end its long-running bond-buying program to stimulate the economy.

Third-quarter GDP growth was broadly based and slightly better than the average of analysts’ forecast — 3.2 percent — but some of that came from what appeared to be a temporary boost. There was a jump in federal defense spending, and net exports were up sharply in the quarter, neither of which is likely to be sustained.

Consumer spending, which accounts for about two-thirds of U.S. economic activity, made a decent contribution to growth in the quarter, although slowing from the second quarter. Business spending advanced at a good clip, but residential investment was flat. A slowdown in the buildup of inventories also dragged down the growth figure.

GDP has expanded at an annual pace of 3.5 percent or higher in four of the last five quarters, an acceleration that suggests the economy is on a more sustained, above-potential pace from what has been a sluggish recovery since the Great Recession ended in mid-2009. In recent months, job growth has increased and the unemployment rate has fallen to below 6 percent, although there is still an unusually large number of people stuck in joblessness or in part-time work.

Before Thursday’s report, forecasters were projecting growth of 2.8 percent, on average, for the current quarter, with consumer activity and residential investment expected to pick up but business spending looking more tempered.

Despite the overall healthy outlook, the U.S. economy, and particularly its exporters, face rougher waters overseas. Major economies such as the eurozone and Japan are struggling, and the stronger dollar has contributed to recent declines in commodity prices that have put more pressure on emerging economies.