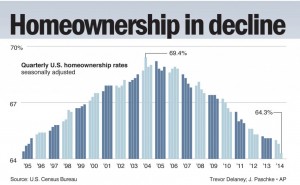 An optimistic statement from the Federal Reserve sent the dollar up and gold prices down Wednesday as traders prepared for rising interest rates.

Major U.S. stock indexes ended with a slight loss after the Fed confirmed that it was shutting down a bond-buying program because the economy no longer needs as much help.

At the end of a two-day meeting, the Fed said that it had ended its $4 trillion bond-buying program, known as quantitative easing, or QE for short, as a result of “underlying strength in the broader economy.”

The S&P 500 index, the benchmark for most investment funds, is now up half a percent for the month of October. It had slumped as much as 6 percent on Oct. 15 as a host of concerns sent markets tumbling.

The Fed restated a pledge to keep its benchmark short-term rate near zero, but it also pointed to signs of strength in the job market. Most economists think the Fed won’t raise that rate until the middle of next year.

“Today’s statement shows the Fed believes the economy is nearing the final stages of full recovery,” said Chris Rupkey, chief financial economist at the Bank of Tokyo Mitsubishi, in a note to clients. “They halted the QE purchases today, and tomorrow, rate hikes are coming. Bet on it.”

A widely used gauge of the dollar’s strength against other currencies, the ICE dollar index, rose 0.6 percent to 85.96.

U.S. government bond prices dipped, nudging the yield on the 10-year Treasury note up to 2.32 percent.

Solid earnings from Caterpillar, Microsoft and other big companies have helped the stock market recover from its slide earlier this month. Nearly half of the big companies in the S&P 500 index have turned in third-quarter results, and more than seven out of 10 have cleared analysts’ targets, according to S&P Capital IQ. Earnings are on track to rise 6 percent for the third quarter.

Facebook lost 6 percent after its chief financial officer said that expenses for the social networking giant could increase by as much as 75 percent next year as it ramps up spending on investments. Its stock dropped $4.91 to $75.86.

Orbital Sciences Corporation sank following news that its Antares rocket exploded moments after lifting off from its launch pad on Tuesday. The rocket was carrying a supply ship for astronauts on the International Space Station, part of Orbital’s contract with NASA. Orbital’s stock plunged $5.10, or 17 percent, to $25.27.

In the commodity markets, benchmark U.S. crude oil rose 78 cents to $82.20 a barrel. Brent crude, the global benchmark, gained $1.09 to $87.12 a barrel in London. The U.S. Energy Department said U.S. crude oil supplies rose by 2.1 million barrels last week, about 700,000 barrels below the expectations of analysts surveyed by Platts.

This article appeared in print on page 10 of the October 30th, 2014 edition of Hamodia.