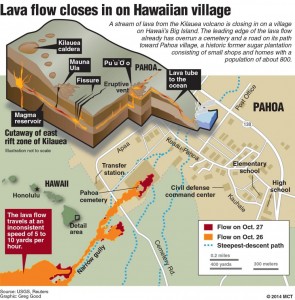 After slowly snaking through unoccupied land for weeks, a river of asphalt-black lava has entered a residential property on Hawaii’s Big Island.

The lava was within yards of a home in the rural community of Pahoa Village on Tuesday.

Depending on which side of the flow students live on, they’ll either go to a newly built temporary facility or other area schools starting Nov. 7 and 10.

Dozens of Pahoa residents have been told they might have to evacuate because of the lava.

The lava crackled and smoked as it advanced toward the two-story structure in Pahoa Village, smothering an expanse of vegetation.

Residents of the small town have had weeks to prepare for what’s been described as a slow-motion disaster. Most have either already left or are prepared to go when necessary.

County officials are making arrangements for those living in the lava’s path to be able to watch the lava destroy their homes as a means of closure.

“You can only imagine the frustration as well as … despair they’re going through,” Hawaii County Civil Defense Director Darryl Oliveira said.

Kilauea volcano, one of the world’s most active, has been erupting continuously since 1983.

Decomposition of vegetation in the lava’s path has created methane gas, which if it accumulates and is ignited by heat can cause a blast, Babb said.

“It’s not a massive explosion,” she said. “But it can dislodge rocks. It can hurl large rocks several feet.”

No one knows if the lava flow will stop, change direction or hit more homes.

In the 1990s, about 200 homes were destroyed by lava flows from Kilauea.

This article appeared in print on page 8 of the October 29th, 2014 edition of Hamodia.