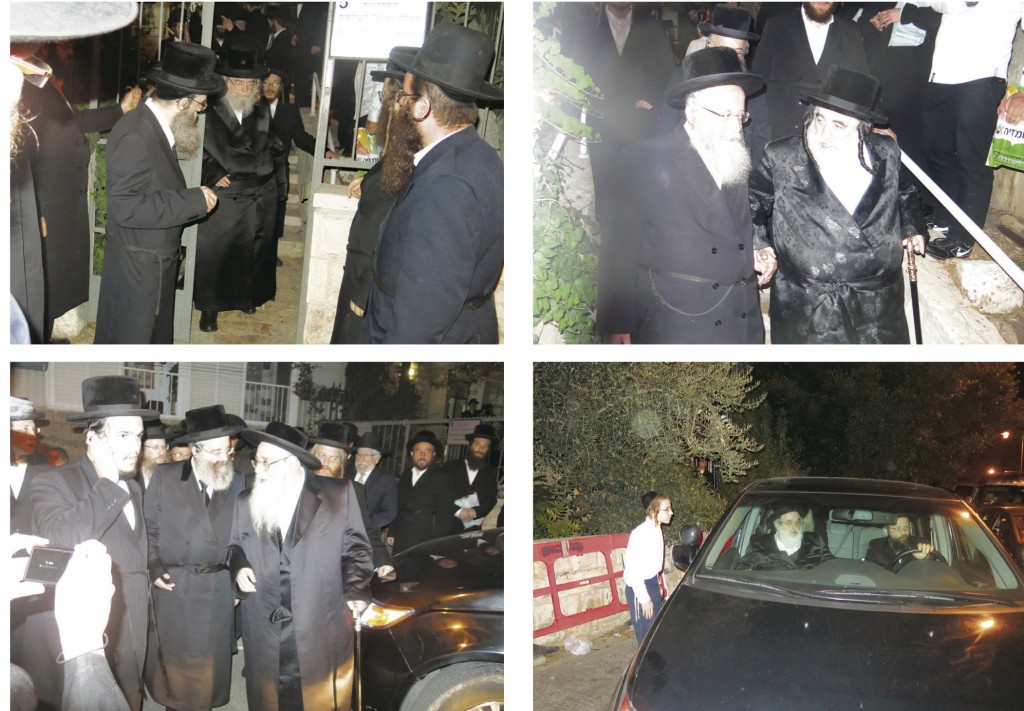 The Moetzes Gedolei HaTorah of Agudas Yisrael in Eretz Yisrael convened yesterday in Yerushalayim and warned of irreparable damage should the conversion law currently considered by the Knesset be passed. This law would force Jews who are loyal to Torah and mitzvos to institute sifrei yochasin (genealogy registers). Other serious issues of concern were also addressed by the Moetzes, including the attempts to draft yeshivah students and how to deal with it; the threats to Shabbos observance manifested by the relentless battle that the Tel Aviv municipality and tycoons are waging against Shabbos; and the housing crisis in the chareidi community, especially in the face of the hostile and discriminatory treatment by the government.

The meeting took place at the Agudas Yisrael world headquarters in Yerushalayim. It was attended by (in alphabetical order) the Rebbes, shlita, of Belz, Biala, Boyan, Ger, Modzhitz, Sadigura, Sanz-Klausenburg of Eretz Yisrael, Slonim, and the Vizhnitzer Rebbes of Eretz Yisrael.

The proposed law threatens to loosen conversion criteria to enable non-Jews to be registered as Jews, under the guise of having ostensibly converted. Until now, the Rabbinical courts were responsible for conversion matters, but under this law, permission would be granted to every city rav to “convert” people, thus opening the path to those seeking to convert to locate a “lenient” rav. This is all in order to enable “conversion” options without the prerequisite acceptance of Torah and mitzvos. Such a “conversion” is invalid, but the “conversion certificate” that will be issued will not indicate this fact.

The terrible consequences of offering invalid “conversions” to the masses is that these non-Jews will become integrated into Am Yisrael, and by the next generation it will not be possible to know that so-and-so is actually a non-Jew, even though in official registries he appears as a Jew.

The Moetzes Gedolei HaTorah made it clear that this dangerous new law is leading the State of Israel to an abyss. It will necessitate the creation of sifrei yochasin in order to enable those who want to marry according to Jewish law, and not to, chalilah, enter mixed marriages unintentionally.

The Moetzes also made it clear that such sifrei yochasin are a terrible thing because they will tear the nation into separate groups that can never be reconciled. The outcome of the implementation of this law will not be able to be rectified, not in this generation and not in generations to come.

This government, if it will pass such a law, must be aware of the eternal ramifications that it will have.

Therefore, the Moetzes Gedolei HaTorah, in its declaration, called on everyone who has the power to  thwart the law to do so.

The Moetzes also discussed the mandatory draft law, after the nullification of an arrangement under which those who were learning Torah were able to defer their army service.

Not only did a law drafting yeshivah students pass, the government also took away the rights of lomdei Torah and cut yeshivah budgets drastically in an effort force the Torah world to its knees and to take away the rest of their rights as citizens if they insist on upholding their values.

The Moetzes discussed ways of dealing with the laws, and will publicize a decision in the near future.

Also on the agenda was the Tel Aviv municipality’s active, blatant war against Shabbos, which it is waging with the support of tycoons and large business owners. The municipality is using every tool at its disposal, including the courts and legislation, to legalize blatant Shabbos desecration in the city by opening groceries and other public places.

The pleas of small business owners who just wanted to have a day of rest, instead of having to keep up with competition that is open seven days a week, forcing them to work on Shabbos, were ignored. Their demands were accepted by the court and backed by the Interior Minister, but the Tel Aviv municipality will not desist: it is continuing to legislate laws, and refrains from enforcing existing ones, so that Shabbos continues to be desecrated in the city.

The Moetzes called on anyone who can influence this issue, and can fight against the breach of Shabbos, to do what he can to prevent the desecration of Shabbos in Tel Aviv and anywhere else.

The Gedolim also discussed ways of preserving the rights of the chareidi sector, which are being trampled. One issue that was addressed is the acute housing crisis in the chareidi sector, both because of their difficult financial straits, as well as what is widely seen as open governmental discrimination against them.

The Moetzes made a decision to authorize a committee of askanim to work towards establishing housing for the chareidi sector. The committee is to work with entities in Israel and abroad, with investors and with philanthropists, to ease the housing crisis.

No photographs of the meeting were available at press time.