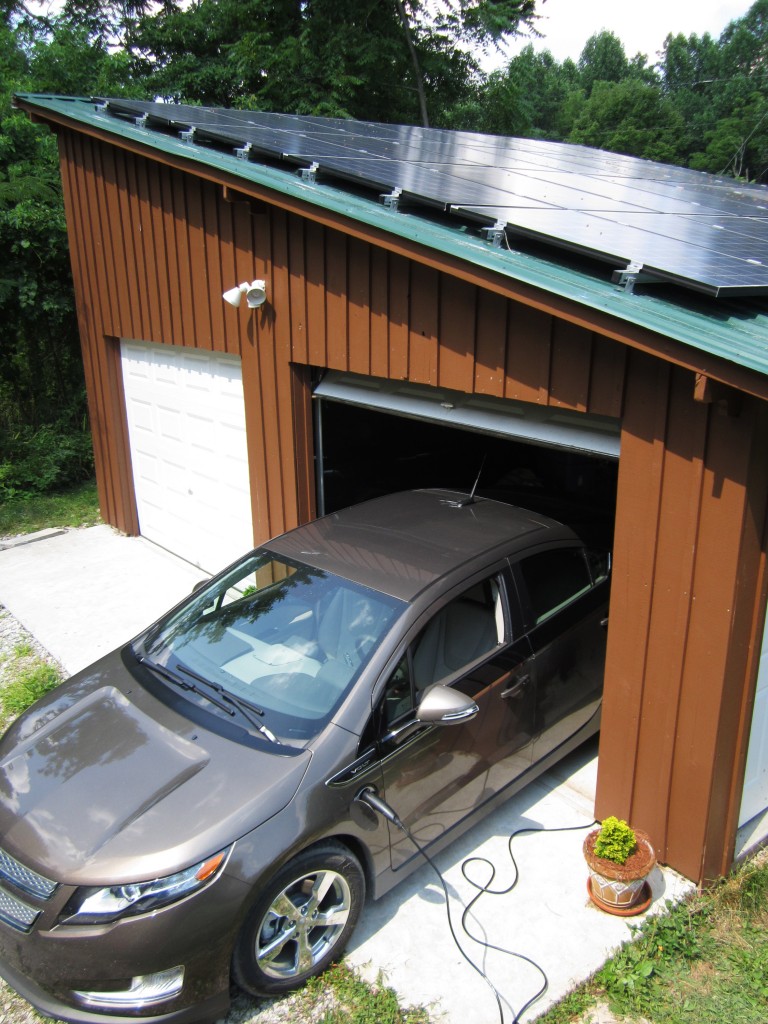 Owners of electric vehicles have already gone gas-free. Now, a growing number are powering their cars with sunlight.

Solar panels installed on the roof of a home or garage can easily generate enough electricity to power an electric or plug-in gas-electric hybrid vehicle. The panels aren’t cheap, and neither are the cars. A Ford Fusion Energi plug-in sedan, for example, is $7,200 more than an equivalent gas-powered Fusion even after a $4,007 federal tax credit.

But advocates say the investment pays off over time and is worth it for the thrill of fossil-fuel-free driving.

“We think it was one of the best things in the world to do,” says Kevin Tofel, who bought a Chevrolet Volt in 2012 to soak up the excess power from his home solar-energy system. “We will never go back to an all-gas car.”

No one knows exactly how many electric cars are being powered by solar energy, but the number of electric and plug-in hybrid cars in the U.S. is growing. Last year, 97,563 were sold in the U.S., according to Ward’s AutoInfoBank, up 83 percent from the year before. Meanwhile, solar installations grew 21 percent in the second quarter of this year, and more than 500,000 homes and businesses now have them, according to the Solar Energy Industries Association.

Tofel, 45, a senior writer for the technology website Gigaom, installed 41 solar panels on the roof of his Telford, Pennsylvania, home in 2011. The solar array – the term for a group of panels – cost $51,865, but after state and federal tax credits, the total cost was $29,205.

In the first year, Tofel found that the panels provided 13.8 megawatt hours of electricity, but his family was using only 7.59 megawatt hours. So in 2012, Tofel traded in an Acura RDX for a Volt plug-in hybrid that could be charged using some of that excess solar energy. In a typical year, with 15,243 miles of driving, the Volt used 5.074 megawatt hours.

Tofel used to spend $250 per month on gas for the Acura; now, he spends just $50, for the times when the Volt isn’t near a charging station and he has to fill its backup gas engine. Charging the Volt overnight costs him $1.50, but the family makes that money back during the day when it sends solar power to the electric grid. He estimates that adding the car will cut his break-even point on the solar investment from 11.7 years to six years.

Powering a car with solar energy isn’t for everyone. Among things to consider:

A south- or southeast-facing roof is a necessity, and there can’t be shady trees around the house. Sam Avery, who installs solar panels in Kentucky through his company, Avery and Sun, says dormers, chimneys and other design features can hamper an installation.

“If people do have a good site, it’s usually by chance,” he says. “I have to retrofit a lot.”

The cost of installing solar panels has come down, from $8 to $10 per watt eight years ago to $3 a watt or less now. But it’s still a huge investment.

Before the installation, his family was paying $1,500 per year for electricity. Now, he pays $5.36 per month, the administrative fee for connecting to the grid. That fuels his home and his all-electric Nissan Leaf, which uses around a third of the energy that his solar panels generate. Webster thinks he’ll break even on his investment in six years.

Some solar companies offer leasing programs, which let customers pay a fixed monthly cost for panels. There are also some incentive programs: Honda Motor Co. offers $400 toward the installation of panels through SolarCity, a company that installs them in 15 states.

Buyers also could consider a smaller system just to power a car. A Leaf needs around 4.5 megawatt hours of electricity per year to go 15,000 miles. Eighteen 250-watt panels – a $13,500 investment at $3 per watt – would produce that much electricity.

For Webster, who has a predictable round-trip commute of less than 50 miles and lives near a lot of electric charging stations, an all-electric car like the Leaf makes sense. But for Avery, who lives in rural Kentucky, the Volt was the better choice, because he needs the security of a backup gas engine.

The U.S. Environmental Protection Agency’s fuel-economy website – http://www.fueleconomy.gov – lists the number of kilowatt hours that a car uses to travel 100 miles, which can help potential buyers calculate their energy needs.

In short, people considering powering a car with solar energy have some math to do. Or maybe they don’t. For Avery, the environmental benefit outweighs everything.