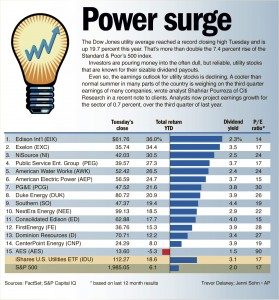 Strong corporate earnings pushed up stocks across industries on Tuesday, with the energy sector and small companies leading the gains.

Stocks rose from the opening of trading, then built on the momentum as investors sifted through mostly encouraging quarterly results. Whirlpool, AutoNation and engine-maker Cummins all jumped 7 percent after reporting their earnings.

With Tuesday’s gain, the market has recovered almost all of the ground that it lost in a four-week slide through Oct. 15 that nearly drove the Standard & Poor’s 500 into a “correction,” defined as a drop of 10 percent or more from a recent high.

“Here we are just two weeks later, and we’ve just about gained it back,” said Scott Wren, a stock strategist at Wells Fargo Advisors. “We think it’s still going up.”

Investors were also cheered by news that a key gauge of U.S. consumer confidence rebounded in October. The Conference Board reported that its confidence index hit a seven-year high as solid job gains raised expectations for economic growth, an encouraging sign for retailers as they head into the holiday shopping season.

The biggest gain was in the Russell 2000, a small stock index. It jumped 2.9 percent.

Investors are now looking ahead to Wednesday’s announcement from the Federal Reserve’s policymaking committee for insight into when the central bank might start raising interest rates. The Fed is winding down its $4 trillion bond-buying program, which is known as quantitative easing. There is concern about whether the U.S. economy is strong enough to sustain growth without that support.

• Amgen rose 6 percent after it announced plans to cut more jobs, buy back $2 billion worth of stock and raise its dividend by 30 percent.

Brent crude, a benchmark for international oils used by many U.S. refineries, rose 20 cents to close at $86.03 a barrel on the ICE Futures exchange in London.

In bond trading, the price of the 10-year Treasury note fell slightly. The yield, which moves in the opposite direction, rose to 2.29 percent from 2.26 percent late Monday.