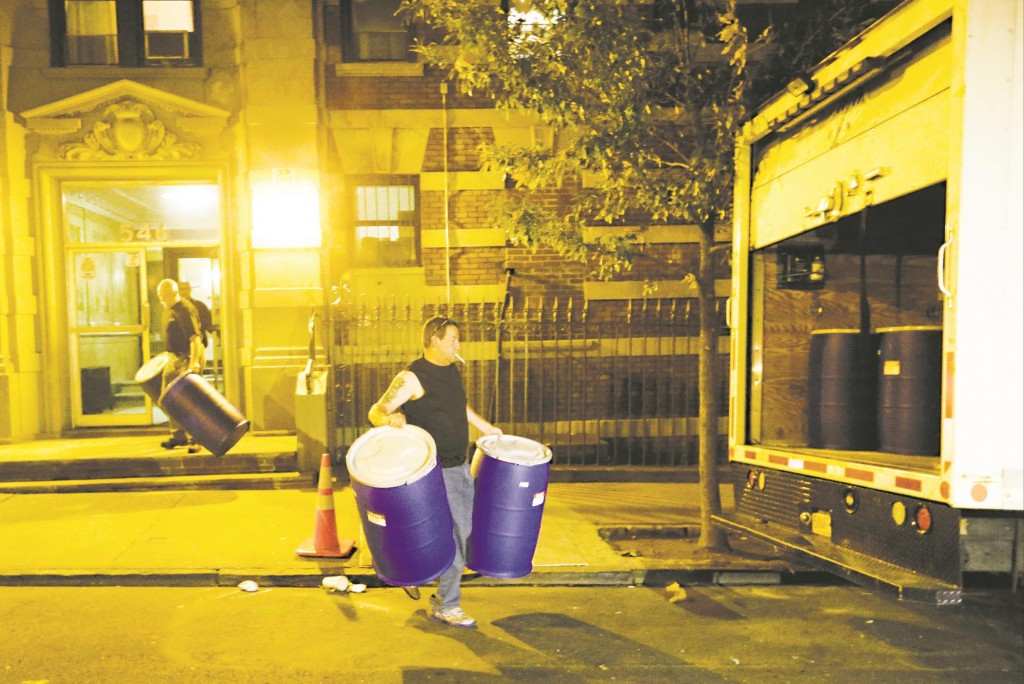 Bright autumn sunshine spilled over the red-striped awning of the Meatball Shop in the West Village on Saturday afternoon. Inside the restaurant, a dozen photographers and journalists elbowed each other for room, waiting for Mayor Bill de Blasio to make his appearance.

As is the habit of politicians in times of public crisis, the mayor was trying to allay fears of Ebola by eating in the restaurant in which Craig Spencer had eaten just four days earlier. De Blasio had already ridden the subway lines that Spencer had taken Tuesday and Wednesday, so lunch at the restaurant with his wife, Chirlane McCray, and the city’s health commissioner, Mary Bassett, was next on the menu.

As he strode in past a phalanx of photographers and sat at a small table in the back, de Blasio could see that the place — despite having been closed for a health inspection Thursday — had a line waiting down Greenwich Avenue.

Ebola in New York City might have been big news elsewhere, but it hadn’t set off panic among most Manhattanites.

“This doctor did the responsible thing, and as soon as he had a fever he called someone,” said Joe Farmarco, who lives a block from Spencer. “That’s exactly how it’s supposed to be.”

How it’s supposed to be is occupying everyone from the White House to Harlem. But many of those who live near Spencer or who frequent the places he visited in the hours leading up to his hospitalization are leaving the hysteria to others.

Spencer’s neighborhood in particular appeared unshaken. In Hamilton Heights on Friday morning, the crowd standing sentinel outside his apartment building included nary a neighborhood resident — just a gaggle of reporters and media trucks.

“I mean, I’m not really scared because I know that there’s such a slim chance of contracting the virus,” said Emilia Navarro, a young woman who works in the area.

On Wednesday, Spencer took a three-mile run to pick up a box of vegetables and fruit at a farm share. At 5:30, along with two friends, he headed for the Gutter bowling alley in Williamsburg, taking the A Train south and then catching the L to Brooklyn.

On Friday, around the same time, Kate Paulin was riding the L toward Williamsburg. Paulin, who has lived in New York for 10 years, sounded philosophical about the risk of Ebola.

When Spencer and his friends exited the subway at Bedford Avenue, they walked about a dozen blocks to a bowling alley, barely discernible on a dark street of former warehouses. Just a Coca-Cola sign with the single word “Bowl” hangs over the entrance. It was closed Friday night and wasn’t scheduled to reopen until health officials had the venue disinfected.

When Spencer was at the bowling alley two days earlier, he called for an Uber taxi to pick him up. Faisal Zaman, who was driving an Uber taxi in the same area, said Friday that he had not heard about Spencer or Ebola. Originally from Pakistan, Zaman expressed concern for the physician but not for himself or his 2014 Toyota Camry.

“I clean my car every second day with disinfectant wipes,” he said.

At the Meatball Shop, the mayor ordered a root beer and four chicken meatballs with tomato sauce while a dozen photographers took pictures of the smiling mayor and his guests.

No one asked whether he had enjoyed his meal. But one of his aides hurriedly scooped up the single remaining meatball in his boss’s dish and deposited it in a take-out box, to be eaten later.