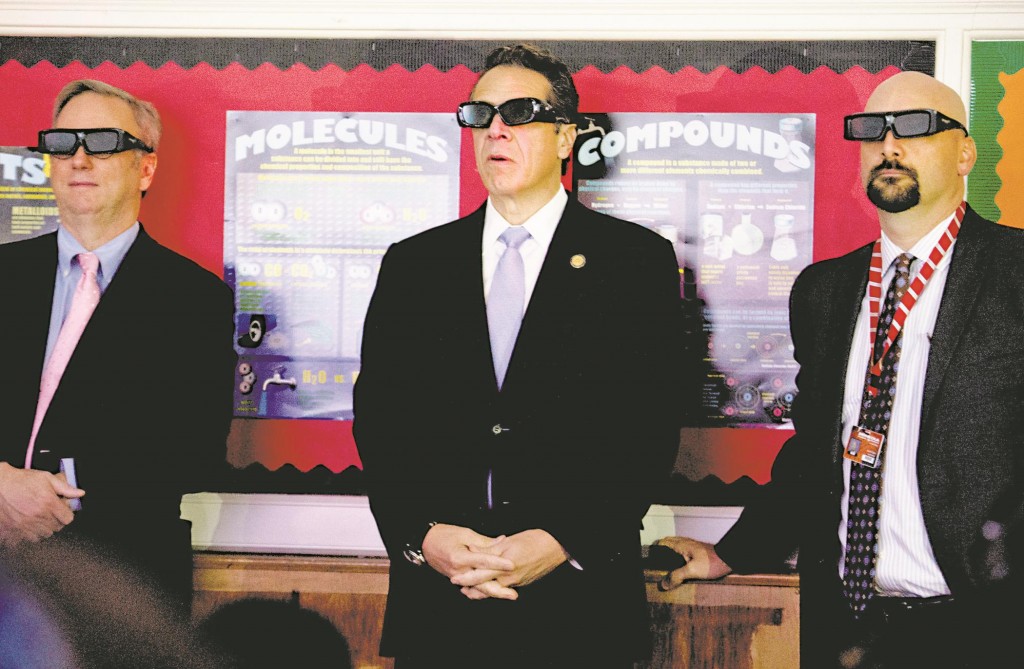 Gov. Andrew Cuomo says New York has more jobs than ever and that upstate New York is rebounding. Republican Rob Astorino talks about people fleeing to states with lower taxes and higher employment.

It’s as if they live in two very different New Yorks: one a state where government is helping dairy farms and high-tech startups reverse decades of decline, the other a once-mighty economic engine now stalling under suffocating regulations and taxes.

“It’s a tale of two states, and there’s quite a sharp divergence,” said Edmund McMahon, an economic analyst and president of the conservative-leaning Empire Center for Public Policy.

New York state’s unemployment rate stood at 6.2 percent in September, the lowest it’s been since October 2008. The state now has 7.6 million private-sector jobs, a gain of more than 120,000 in the past year. The biggest gains were in education and health care.

Cuomo likes to repeat these numbers on the campaign trail, saying his administration’s work to cut taxes and boost economic development is paying dividends.

“When you remember where we were and you look at where we are now there’s no doubt the state is better off,” Cuomo said.

But the state has added jobs at a lower rate than other big states, and Astorino notes that many of the gains have been in New York City, despite Cuomo’s efforts to focus on upstate. He cites a U.S. Conference of Mayors 2020 forecast that ranked Buffalo 354th out of 363 for economic growth. Binghamton was 363rd.

Governors have only a limited effect on state economies, which are largely dependent on national and international factors. But economists say governors can make an impact through taxes, regulations, educational policies, subsidies and even investments in roads, bridges and airports.

The numbers suggest that both Cuomo and Astorino are correct: New York’s economy is rebounding — but not as fast as other states.

Cuomo’s attempts to jumpstart the upstate economy include the “Buffalo Billion,” which aims to inject $1 billion into economic development in the state’s second-largest city. It could take years for many of the investments to translate into jobs.

In September, Cuomo marked the construction of a new solar power factory that is set to receive $750 million in state investments. The company behind the factory — SolarCity — hopes to employ 1,500 people at the factory and some 2,000 others around the state.

Astorino said the project is an example of “corporate welfare” in which the state pays too steep a price.

Cuomo has also championed upstate industries such as wine, beer and cider production and dairy. The state is now the nation’s largest producer of yogurt, and New York’s dairy industry as a whole employs about 9,500 people.

But McMahon argued that growth in the dairy industry has more to do with the growing popularity of Greek yogurt than it does with anything politicians in Albany did. He cited the success of Chobani, a company that formed after its CEO reopened a shuttered dairy plant in central New York.

“This wasn’t an Albany master plan,” he said.