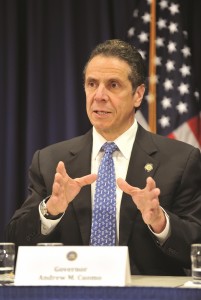 Home to the largest Jewish population outside of Israel, New York State has always had a special relationship with Israel and the Jewish community. Friends stand together in times of crisis, and the people of New York stand shoulder-to-shoulder with the people of Israel. That is why this past August, I led a bi-partisan delegation of state leaders to Israel to reaffirm our support and deliver that message of solidarity in person. I saw first-hand the struggle that the Israeli people endure each and every day. Walking through the Hamas tunnels with former president Peres and meeting with Prime Minister Netanyahu really brought this point home. We strongly support Israel’s right to defend itself and we will continue to work closely with our ally Israel to fight global terrorism. At a time of upheaval across the Middle East, Israel remains a bulwark of democracy and a beacon of courage and freedom.

Closer to home, I look forward to continuing to work closely with the Jewish community over the next four years to address critical issues that impact families throughout New York. A key initiative of my second term will be the creation of the Office of Faith-Based Community Services to assist and maximize community and faith-based organizations in providing education, health, workforce training, food programs and social services to communities — especially those most in need.

The Office will be housed under the new State Nonprofit Coordinating Unit — a Unit dedicated to improving coordination and opportunities for all nonprofits in New York State. Faith-based organizations are often on the front lines of providing critical services to families across New York and the state needs to maximize the efforts of these organizations to provide services to those in need.

Together, we will also work to continue to improve education throughout the state in both public and non-public schools. Through the Mandated Services Aid (MSA) and Comprehensive Attendance Program (CAP) programs, I have worked to expand support for non-public schools. Since 2011-12, MSA has increased by over $20 million, or 26 percent, from $77.2 million to $97.6 million.

Since 2011-12, funding for CAP has increased by $35 million, or 134 percent, from $26.2 million to $61.2 million. In addition, I will continue to work for the passage of the Education Investment Tax Credit that would provide a dollar-for-dollar state tax credit for any person or business that makes a donation to public schools or private scholarships for students attending non-public schools. This bill would encourage charitable donations to non-profit organizations that provide scholarships for students to attend a non-public school or a non-resident public school that best meets their needs.

I was proud in my first year as Governor to extend the Tuition Assistance program to include Rabbinical schools. This is something that has not been included in the TAP program since its inception in 1973. Beginning in 2012-13, an estimated $20 million in grants were awarded to students, averaging $4,513 per recipient. This has had a major impact on close to 5000 rabbinical students in New York State.

Responding to concerns among parents in the community about safety and security, I supported funding to cover the costs for children to be dropped off within 600 feet of their homes after school. In this year’s budget, we included two significant changes to this program. It was converted from a one year program to a permanent program. Additionally, the maximum reimbursement was increased by over $2 million from $5.6 million to $8.1 million.

Every New Yorker now pays a lower tax rate than they did when I first took office, but there is more work to do in this regard. For years, taxpayers in this state struggled to make ends meet and state government was little help — but that’s changing. Under the $1.5 billion property tax relief program enacted as part of the 2014-15 budget, New Yorkers this year will receive a check equal to the growth in property taxes only if their local government stays within the two percent property tax cap — essentially freezing taxes for residents of localities that hold to the cap’s limit.

Next year, New Yorkers will receive property tax relief if their local government puts forward a plan to reduce their tax burden by three percent over three years. By design, the plan will provide long-term tax relief to New York property owners, as well as incentivizing county governments, school districts, and towns and villages to collaborate and find ways to reduce the property tax burden. To provide further relief, we will continue the State’s fiscally responsible budgeting, extend the property tax cap, create a $500 million fund to encourage localities to cut costs in order to reduce property taxes, and organize a summit of local leaders to discuss best practices to develop tax saving plans.

When I took office four years ago we faced a broken government and our state was in crisis — the Great Recession, Albany gridlock and a $10 billion deficit. We were hit with hurricanes, floods, natural disasters — but we recovered, and we are stronger for it. Today we’re not just building back — we are building back better. I feel so honored to have been able to serve as governor of this great state, and I hope that you will come out and vote on November 4.

This article appeared in print on page 24 of the October 29th, 2014 edition of Hamodia.