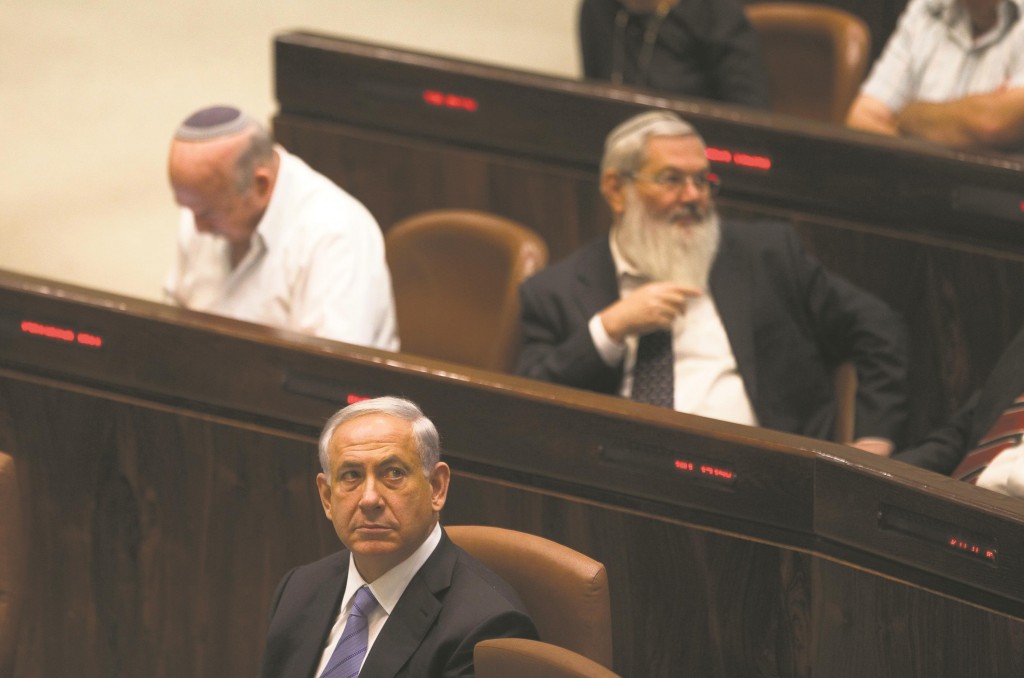 As the Knesset opened its winter session on Monday, a number of bills were in the works that would seem to guarantee a contentious few months.

Among the issues on the agenda: liberalization of the conversion process; what to do about the illegal migrants; overriding High Court overrides of Knesset legislation (in particular, the detention policy for the migrants); the deteriorating security situation; and last but not least, the 2015 state budget.

MK Elazar Stern (Movement) plans to push forward his bill to allow municipal rabbis to perform conversions, despite opposition from Prime Minister Netanyahu, the chief rabbis and the chareidi parties. Even the Jewish Home party, which at one time supported the goals of the bill, threatened to bolt the government should the bill pass in its current form, as nearly all rabbis have deemed the bill dangerous to the Jewish identity of the state.  The bill was approved yesterday in the committee after a stormy debate, and is now slated to be returned to the full Knesset for second and third readings.

Outgoing Interior Minister Gideon Saar is expected to present a revised bill on illegal migrants that will hopefully satisfy the judiciary, which for the second time in a year recently ruled the government’s policy in violation of their human rights.

Knesset Interior Committee chairwoman Miri Regev (Likud) will be presiding over a discussion of security, or the lack of it, with Public Security Minister Yitzhak Aharonovitch as special guest.

The budget debates are shaping up to be an exhausting process, as the opposition plans to submit thousands of objections and amendments to the budget. The Knesset must pass a budget by March, otherwise it would have to dissolve and elections would be called.

The MKs once again will face the issue of their own public image. On Sunday, a joint study by the University of Haifa and Ben-Gurion University of the Negev researchers found that two-thirds of the public does not trust the MKs and ministers.

The survey found that 65 percent of Israelis do not trust MKs, while 13% do. The average trust ranking for lawmakers is 2.22, down from 2.29 last year, which was the highest ever.

Still, this year’s ranking is relatively high compared to the 14 years in which the poll has been taken and is the second-highest it has been.

Some Arab MKs registered their displeasure with Israel’s premier lawmaking body by boycotting the first day. They alleged racism, incitement against them and a violation of their rights to express themselves in the Knesset.

MKs from the Balad, Ra’am-Ta’al, and Arab-Jewish Hadash parties voiced their opposition on Monday to the Governance Law passed last March that raised the electoral threshold — the minimum number of votes a party must win to enter parliament — from two percent to 3.25%, claiming that it was aimed at reducing Arab representation.

Balad, Hadash and Ra’am-Ta’al won 2.56%, 2.99% and 3.65% respectively in the last elections. Unless they can merge forces, they face political extinction.

They also protested the suspension of MK Hanin Zoabi [Balad] from the Knesset for six months over her assertion that the kidnappers of three Israeli teens in June were not terrorists.